Dalton back on practice field and looking good 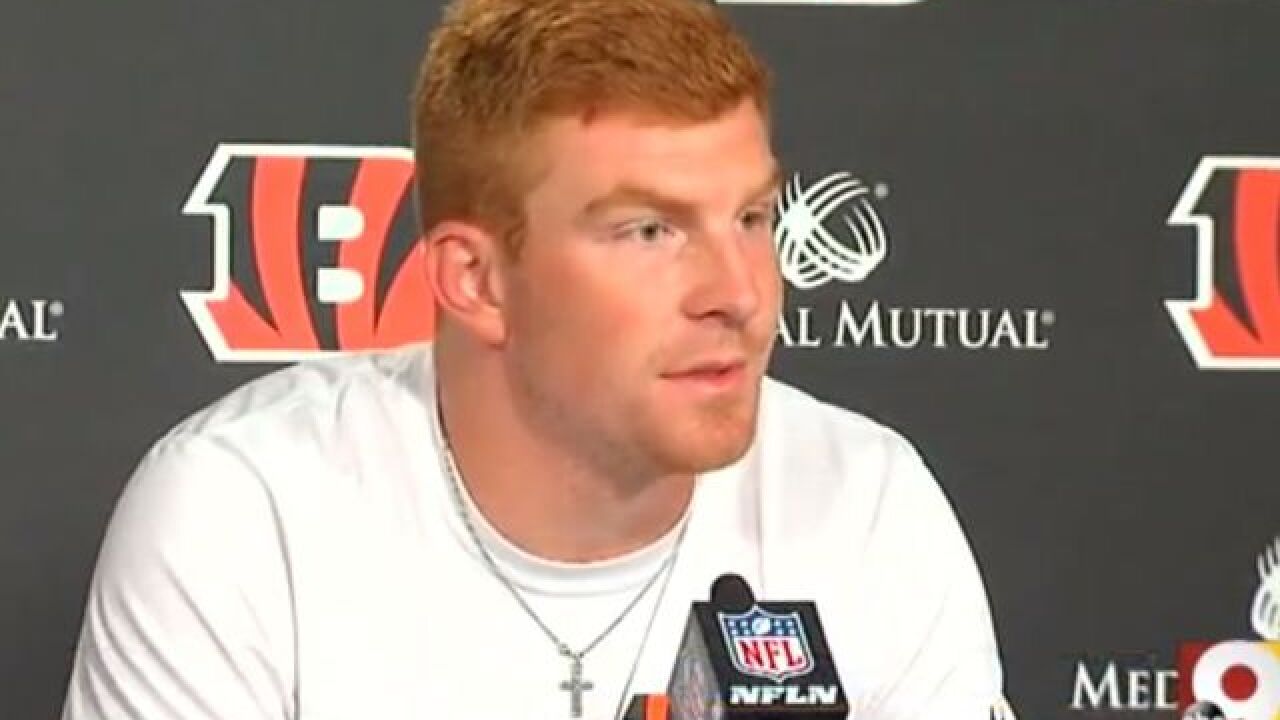 CINCINNATI (AP) — Andy Dalton took the snap during an 11-on-11 drill, looked deep and let it fly. A.J. Green had barely a step on cornerback Adam "Pacman" Jones, leaving a small space to fit one in.

It was right there.

Dalton completed his long throw to Green on Tuesday, leaving Jones punching at the air in frustration. And then Dalton did it again and again, beating a different defender each time.

In his first time running the offense since he broke his thumb, Dalton was right on the mark.

"It's been awhile now," Dalton said after practice, wiping sweat from his forehead. "It feels good to be back out there and not have any concerns."

The Bengals are a work in progress on offense, trying to finally get over their historically bad run of playoff losses. They spent much of the offseason keeping their defense intact, but they lost two of their top three receivers and changed offensive coordinators.

Receiver Marvin Jones and Mohamed Sanu left as free agents. The Bengals signed receiver Brandon LaFell and drafted Tyler Boyd in the second round to fill out the receiving group.

RELATED: Tyler Eifert to have ankle surgery, according to reports

Former offensive coordinator Hue Jackson helped Dalton get to his breakthrough season last year. He was among the league's top passers when he broke his right thumb while making a tackle during an interception return last Dec. 13 during a loss to the Steelers. Dalton missed the rest of the season, including a first-round playoff loss to the Steelers.

When Jackson took Cleveland's head coaching job, the Bengals elevated Ken Zampese to coordinator. He was the quarterbacks coach for the last 13 seasons, so Dalton is familiar with him.

Jackson liked to draw up unusual plays. During his two years as coordinator, Dalton caught a touchdown pass and would be used as a lead blocker on occasion. Jackson liked to use unbalanced lines and split an offensive tackle as a slot receiver so he could block on the perimeter. He had Sanu take snaps in a special package.

Zampese plans to be creative as well, although nobody will know how until the season begins.

"He's been my coach since I've been here," said Dalton, who was a rookie in 2011. "He's been around this team a long time. Obviously he's going to do different things because he's different from Hue. But the nature of what he does, we'll get used to that. We'll see over time."

The Bengals haven't won a playoff game since the 1990 season, the sixth-longest streak of playoff futility in NFL history. They've lost an opening-round game each of the last five seasons, an NFL record — no other team has lost more than three straight. Coach Marvin Lewis is 0-7 in the playoffs, also an NFL record.

With the offense in flux, Dalton and Green are going to be counted on to get the new receivers up to speed.

"We know we've got a new locker room," Green said. "My job and Andy's job is to push this offense. Andy and I have been here long enough that this offense goes as we go. We don't need any coaches or anybody to push us. We know what we have to do."