All eyes on the offense at Bengals' training camp 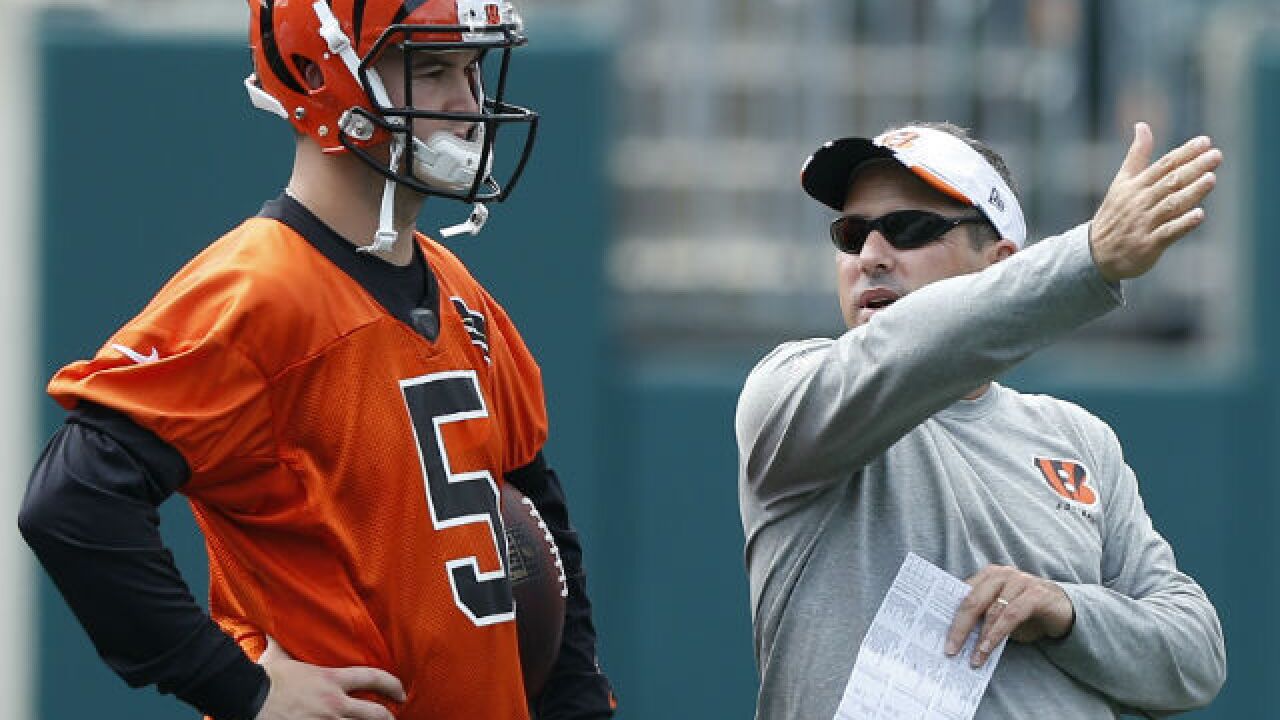 CINCINNATI (AP) — New Bengals offensive coordinator Ken Zampese isn't sure why people think anything will be different this time around.

"It's the same offense," the first-year coordinator said. "Nothing's changed."

Maybe the X's and O's are the same, but the folks filling the roles have changed in Cincinnati for the first time in a while. The receiving group is largely new. The tight end position is in flux. And the quarterback has recovered from a broken wrist that ended his breakthrough season and left everyone wondering how much more he can do.

Training camp at Paul Brown Stadium. which starts Friday, will provide the first glimpse of how it all fits together, and what still needs to be done before the season opener on Sunday, Sept. 11 at the Jets.

"As time goes on, we'll continue to get better and understand more, but we're in a good place right now," quarterback Andy Dalton said.

The Bengals won 12 games last season for only the third time in franchise history. They lost to the Steelers at home in December — Dalton broke his right wrist while making a tackle on an interception return — and then lost again to the Steelers 18-16 in the first round of the playoffs at Paul Brown Stadium. They blew a late lead in one of the biggest meltdowns in postseason history.

Dalton missed the last three regular-season games and the playoff loss, Cincinnati's fifth straight season of losing an opening-round game. They haven't won in the postseason in 25 years, tied for the sixth-longest streak of futility in NFL history.

In the offseason, the Bengals spent most of their money in keeping the defense intact after it gave up the second-fewest points in the league. Middle linebacker Vontaze Burfict will miss the first three games on an NFL suspension for repeated illegal hits, including his hit to the head of Steelers receiver Antonio Brown during the last-minute meltdown in the playoffs.

The offense is a different matter, with change starting right at the top. Zampese was elevated from quarterbacks coach after Hue Jackson took the head coaching job in Cleveland. Jackson liked to push the envelope with his creativity, even having Dalton catch a touchdown pass in one game. Zampese will likely be less adventuresome.

"Zamp's personality is a little different than Hue," Dalton said. "The offense as a whole, and schematically, is going to take on what he likes. There are some things similar, and some things we'll do different."

Here are five things to watch during the Bengals' camp:

DALTON'S RETURN: Dalton got his breakthrough season last year, his fifth in the NFL. He completed 66 percent of his passes for 3,250 yards with 25 touchdowns and only seven interceptions. His passer rating of 106.3 set a club record and was second to Seattle's Russell Wilson (110.1) for the league lead. The question is how much more room he has to grow.

A.J. AND WHO ELSE: A.J. Green leads a receiving group in transition. Marvin Jones and Mohamed Sanu — who finished second and third in catches last season — left as free agents. Brandon LaFell was signed as a free agent, and the Bengals drafted Tyler Boyd from Pittsburgh in the second round. Training camp and the four preseason games will provide a first glimpse of how they fit.

EIFERT'S REPLACEMENT: Tyler Eifert had surgery on his left ankle this summer and is expected to miss most of training camp and perhaps a few games early in the season. He had one of the best seasons in club history, catching 52 passes for 615 yards and 13 touchdowns, a club record for a tight end. There's not much experience behind him in the tight end group.

WHAT'S WRONG WITH BURFICT: On the eve of camp, the Bengals placed Burfict on the Active/Non-Football Injury list due to an injury suffered outside organized team activities. The Bengals have not disclosed what that injury is. Burfict is allowed to practice with the team until the first week of the regular season and then he'll sit out three games including a rematch with the Steelers on Sunday, Sept. 18 in Pittsburgh. Burfict's illegal hit on Brown after an incomplete pass sailed over his head moved the Steelers into field-goal range for their playoff win.

THE BUZZ: The Bengals' playoff failures — an NFL record of five straight first-round losses — appear to have taken a toll on fan support. The Bengals had only three crowds of 65,000 fans at Paul Brown Stadium during the regular season last year as they won the AFC North. Three times, they drew fewer than 58,000. The filled 93 percent of their seats, which ranks only 24th in the league. It'll be interesting to see what kind of crowds they draw for camp.