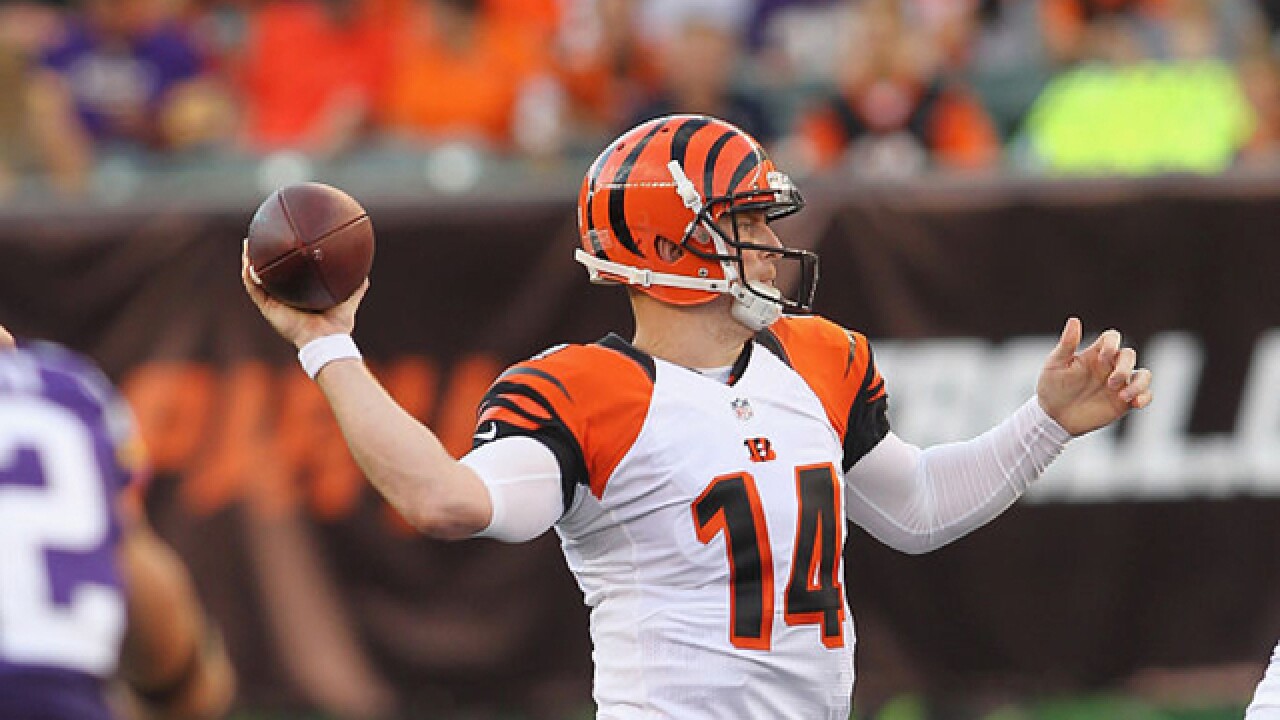 CINCINNATI -- Teams don't put a lot of stock in the first preseason game. It's more for the players down the roster than it is for the stars.

To wit: Andy Dalton and A.J. Green played one possession in the Bengals' 17-16 loss to the Minnesota Vikings Friday night before a crowd of 50,737 at Paul Brown Stadium.

Marvin Lewis went for two with 2:45 left in the game when a one-point conversion would have tied it.

But some conclusions can be made from the game. Here are nine takeaways.

Rookie free agent Alex Erickson made a spectacular run on an 80-yard punt return for a touchdown. Erickson, out of Wisconsin, drifted back to field a 60-yard punt.

He broke a tackle and then got loose on the left side. He showed an impressive burst to get through traffic.

"The punter really drove the punt," Erickson said. "I was going back, so I knew I had room to return it. The guys were fighting up front. I was able to get through there, got on the punter and made him miss.

It was his second TD of the night. He caught a 3-yard pass in the second quarter for the other.

Erickson caught 77 passes for 978 yards last year at Wisconsin. He rushed for 111 yards on seven attempts. He was a quarterback in high school. He ran for 57 TDs in high school and threw for 37 more.

Erickson did his press conference on the podium.

"It is what it is," Erickson said. "It was fun to get out there and play."

Erickson had already made an impression in camp.

"I thought he took advantage of his opportunity," Lewis said. "Alex has done that since we've had him. He showed what he's shown throughout his career at Wisconsin: That he makes football plays. I think he's a really good football player. I'm glad we have him."

Tyler Boyd, the second-round pick this year out of Pittsburgh, made the play of the first half for the Bengals.

He ran a streak down the left side and caught an AJ McCarron pass against tight coverage for 40 yards. It set up the 3-yard touchdown pass from McCarron to Erickson.

"Nothing really too special about it," Boyd said. "Just a basic route that we've been running a lot in practice. I wanted to make it a situation of me and the defender and the ball and track it the best way so I could come down with the possession. I had a chance for one in the first quarter and didn't come down with it. The next time my number was called I wanted to make sure sure I got it."

Said McCarron: "I liked the matchup. I thought I'd take a shot. He made a great play."

Boyd is a big target at 6-foot-2, 197 pounds. He's the leading candidate for the slot receiver spot.

Rashaun Simonise, a 6-5 wideout out of Calgary, made the play of the second half. Simonise showed speed on a 47-yard catch-and-run on a pass from Joe Licata.

The Bengals went on a monster drive on their second possession of the game. They converted six third downs, including a nifty hookup from McCarron to James Wright on third-and-7.

But the drive stalled at 2. The Bengals went for it on fourth-and-1. Cedric Peerman was stuffed. In fact, he lost a yard. So the Bengals went 89 yards in 22 plays and got no points. You don't see that very often, even in the preseason.

"I was pleased with some things we did tempo-wise," Lewis said. "We moved the ball and got some first downs early. We converted some third-and-1s. But in the end, obviously, you got to score. We've got to convert that fourth-and-1."

Dalton looked very good on the first drive, which turned out to be his only drive of the night.

He completed his first four passes for 32 yards, hitting A.J. Green three times. Dalton, however, missed Green, who was well covered, on third-and-3.

Green also only played the one drive.

Green showed some frustration at practice Thursday after he and Dalton failed to hook in the red zone. They appeared to be on a same page Friday.

"I thought things went well," Dalton said. "We played fast. We got in and out of the huddle. Communication and everything was good. Obviously, we want to convert. Overall, I thought it was good.

"I'm not surprised. It's what you expect."

So, again, the Bengals can be confident in their backup quarterback situation.

The Bengals defensive line could not have been much better in the first series of the night. Geno Atkins nearly sacked Teddy Bridgewater on first down and sacked him on second down.

Carlos Dunlap hit Bridgewater on third down, forcing an incompletion. By the way, Elder product and current Minnesota tight end Kyle Rudolph was wide open on the play.

"We just wanted to get after the quarterback and do what we could in the brief opportunity to start, setting the tone for the season," Dunlap said. "It seem like its been a long six months since the last game, so we were anxious to get there again and start getting after the quarterback. It was just three plays, but that's all we wanted to play."

Those turned out to be the Vikings' only plays of the first quarter.

On the next drive -- with the starters out -- the Bengals did not put on that kind of pressure. Bridgewater went 5-of-5 for 88 yards on that drive.

Chykie Brown, a free agent cornerback, did just what a guy trying to make the team wants to avoid in Game 1 of the preseason: He was beaten badly for a 49-yard touchdown by Charles Johnson.

Johnson, a Lloyd High product, was so open that Bridgewater would have to had thrown a wounded duck to miss him.

Brown played on Baltimore's Super Bowl winning team. He moved onto the New York Giants as a free agent. The Bengals signed him in February.

Tight end C.J. Uzomah had a nice pass from McCarron go through his hands. It would have been a 17- or 18-yard pickup deep in Minnesota territory. It was the kind of ball Tyler Eifert always catches.

Uzomah got the start in Eifert's place.

Rudolph's first game in Paul Brown since 2005 when he was an Elder sophomore was uneventful. He played the first two possessions but was only the target of the one pass.

Minnesota star running back Adrian Peterson did not play.