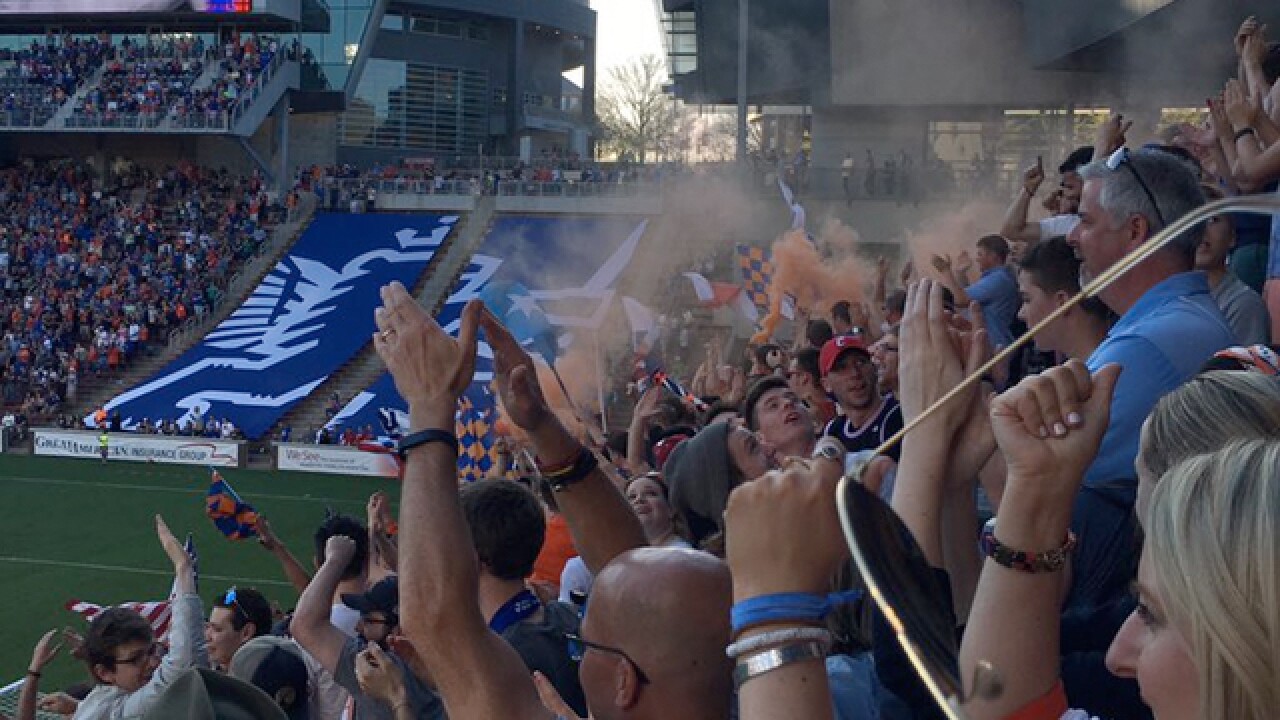 FC Cincinnati president and general manager Jeff Berding said there seems to be a “good mix” of interest from fans of all ages so far, but it’s no secret the club is targeting millennials, college students and youth soccer players in its marketing and ticket sales promotions.

At least 30 percent of the United Soccer League record-crowd of 20,497 fans that attended FC Cincinnati’s second home game Saturday were youth soccer players or college students, according to data provided by the team.

Just over 1,200 tickets (six percent) were sold at the $1 promotional rate to youth soccer players who wore their team jerseys, and a little more than 5,000 tickets (24 percent) were sold at the $5 rate available to college students who sat in “The Legion” behind the south endline. Those numbers don’t include any youth or college students who may have purchased tickets at other rates and in other seating sections.

“I think it’s been a pretty good mix,” Berding said. “There were a number of youth tournaments in the area this past weekend, and we have our partnerships with the youth clubs, so I think we had a pretty good numbers from some of the players and their families who were able to attend. We certainly did better this weekend with the college section that was sold out, so I think that’s a testament to good support there, and if you walk the sidelines, there were lots of adults in the stands too.”

The section for the supporters groups and more passionate fans in “The Bailey” – many of them young millennials – sold out all 1,618 seats behind the north endline and at $10 a ticket, it should remain a hot sell all season.

The roughly 12,500 other tickets sold Saturday included seating in the $12 youth/club sections intended for families and the more adult crowd paying $20-$25 for the middle sections of the east and west sides of the stadium.

Berding said the 70-degree, sunny weather certainly helped bring bigger crowds for Game 2, following a cold home opener the week before, but the record crowd so early in the season still came as a surprise. FC Cincinnati had drawn 14,658 fans to the home opener it had hyped for seventh months. Sacramento Republic FC set the league’s previous regular-season single-game record at 20,231 in 2014.

“We strongly believed in Cincinnati as a strong soccer market so the opportunity to draw large crowds certainly was in our planning all along, but did I think we would pull off what happened Saturday night in Game 2?” Berding said. “No, but there we some factors not in our making that helped -- the weather was phenomenal, and we had the youth tournaments that helped us, and I just think the community has been responsive.”

FC Cincinnati hopes it can sustain that attention throughout the season, but Berding said the goal is still a more conservative 10,000 fans a game.

Even that could be a challenge in the summer months when the University of Cincinnati campus is not buzzing with students looking for entertainment, and families are off on vacations and doing other things.

“It will be a bigger challenge for sure,” Berding said. “We never said we wanted to draw 20,000 a night -- we were blessed. As we get into the summer, could our numbers change? Yes, but we just have to get out and keep building relationships and give fans a great game-day experience and that will have people continuing to want to come.”

The college section was a big difference in the attendance between opening weekend and last weekend, as “The Legion” was barely filled for the opener but was packed on Saturday.

Berding said as summer draws closer the club will have to expand its marketing presence throughout the Cincinnati area to reach the many college students who will be home for the summer. UC students are an easy target because the games are played right on their campus, but the $5 rate is for any college student, regardless of whether it is a local school or not.

FC Cincinnati will especially count on its support from local businesses and young professionals who most likely are buying the higher-priced seats that make up the majority of the sections along the sidelines.

“Our focus is going to continue to be on outreach to the business community,” Berding said. “This is a great thing for Cincinnati, and as businesses recruit college students and new employees, having pro soccer in Cincinnati shows we’re a progressive city that has a lot to offer. We’re another selling point.

“We’re always going to be reaching out to young millennials and college students because that’s a demographic where soccer is very popular, and our partnerships with the youth clubs remain very important to us. We’re a great entertainment choice for families, particularly where soccer is already a part of their lives.”