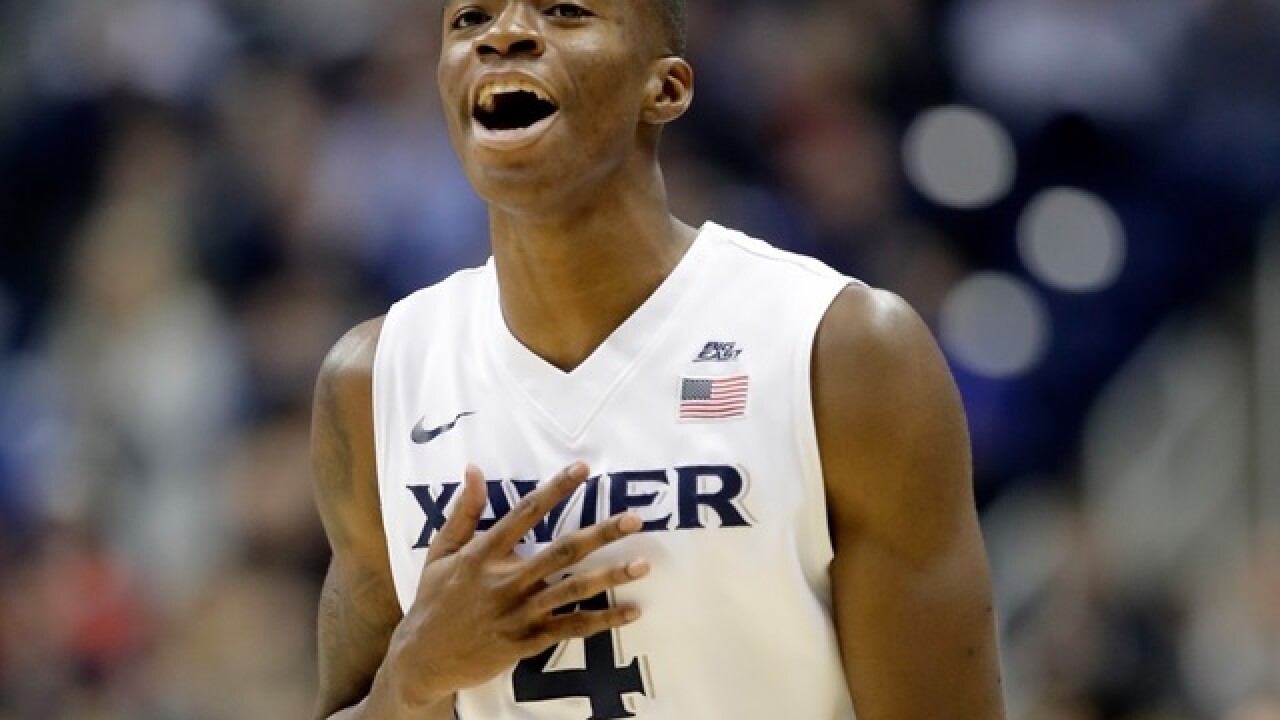 CINCINNATI -- Edmond Sumner’s career as a Xavier basketball player is over.

The standout point guard announced on Twitter Tuesday that he is declaring for the 2017 NBA draft and “fulfilling a lifelong dream.”

"I want to thank Coach Mack and the rest of the staff for believing in me and giving me a chance when no one did!" Sumner wrote. "I'll always be grateful for that."

College players can test the NBA draft waters and preserve their eligibility by not hiring an agent and withdrawing their names by a certain date, as Xavier's Trevon Bluiett did last spring. Sumner plans to hire an agent and will not pull his name by the May 24 deadline.

Where he lands in the draft is the big question. After tearing his ACL in a game versus St. John’s at Madison Square Garden Jan. 29 and undergoing surgery March 1, Sumner faces a long rehabilitation. He’s also expected to have surgery on a torn labrum.

Before his announcement, several mock boards dropped Sumner to the 2018 draft and listed him as a first-round pick -- which is ideal for any draftee based on its prestige and guaranteed money. The boards have not updated based on his decision but it’s possible he’ll drop to the second round (no guaranteed money).

For a little insight for the fans of my decision. The return time table of my injury was a too big of IF I return at this date I'll be fine.

The 6-foot-6 guard averaged 15 points and 5 assists in 21 games last season before the knee injury. During his Xavier career, he displayed a rare brand of athleticism and the ability to energize fans with his high-flying dunks. His lane penetration often drew fouls and sent him to the free-throw line, where he had the third-most attempts on the team despite playing in 17 less games.

"I want to thank Edmond for his efforts over the past three years," Xavier coach Chris Mack said in a release. "He will forever be a part of the Xavier family. We wish him all the success in the world throughout his rehabilitation and comeback as he prepares for a pro career."

Sumner’s entire XU career was injury-riddled. Chronic tendinitis in his knees led to a red-shirt season in 2014-15, his freshman campaign. He played six games before being shut down.

Accolades piled in in 2015-16, his first full year with the Musketeers. He was named to the Kyle Macy Freshman All-America Team, was a unanimous selection for the All-Big East Freshman Team and earned Big East Conference Freshman of the Week honors five times.

Sumner also suffered a frightening injury at Villanova that season. He took a hard fall on a drive, hit his head and suffered a concussion. He was wheeled off the court in a stretcher and missed three games before returning with an inspired performance at Marquette (15 points and five assists off the bench).

Xavier was forced to learn to play without Sumner then, and this year after his ACL tear. Freshman Quentin Goodin performed admirably, despite his court time rocketing from 14 minutes to nearly 40. The experience he gained during the latter months of the season is immensely valuable to next season’s team.

Mack and his staff recruited for the probability of Sumner’s departure and have incoming freshmen to help fill the void. Paul Scruggs is the highest ranked recruit to pick XU since the start of ESPN’s recruiting database 10 years ago. The 6-foot-3 point guard is an ESPN Top 30 prospect.

The fate of Bluiett remains undetermined but his decision too is expected to come fairly soon based on the NBA calendar.