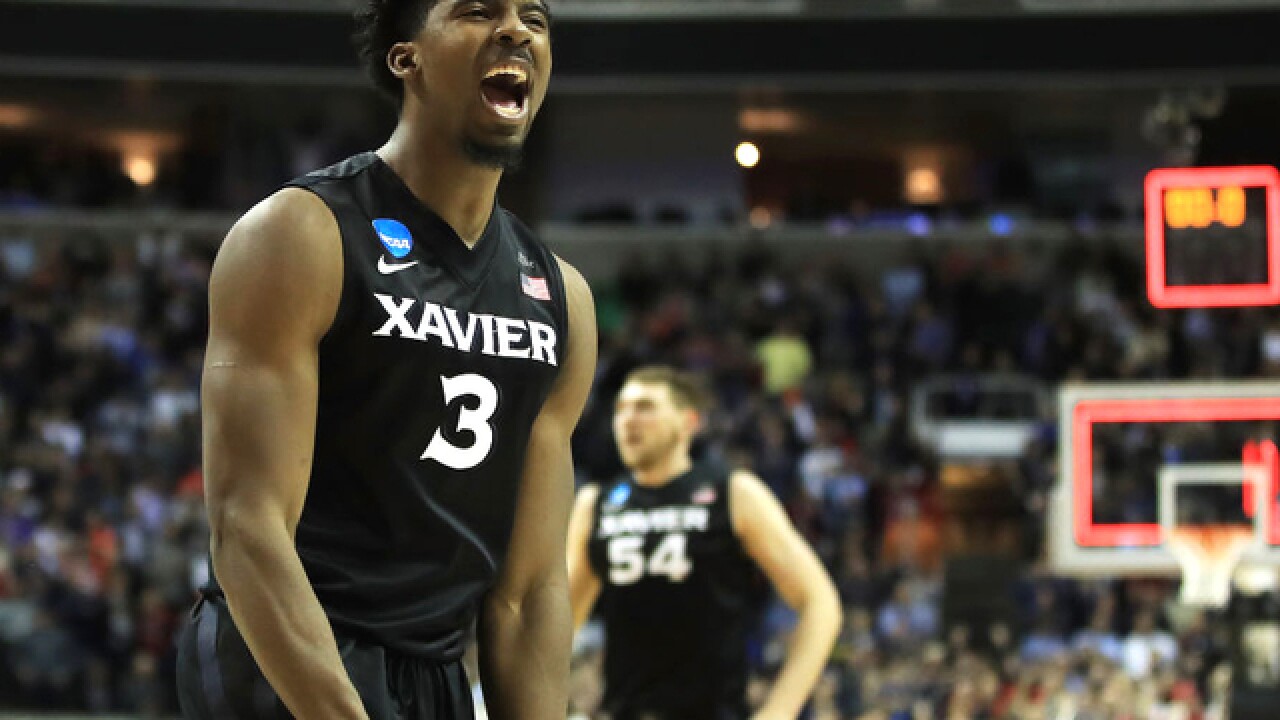 Copyright 2017 Scripps Media, Inc. All rights reserved. This material may not be published, broadcast, rewritten, or redistributed.
Ezra Shaw
<p>SAN JOSE, CA - MARCH 23: Quentin Goodin #3 of the Xavier Musketeers celebvrates their 73 to 71 win over the Arizona Wildcats during the 2017 NCAA Men's Basketball Tournament West Regional at SAP Center on March 23, 2017 in San Jose, California. (Photo by Ezra Shaw/Getty Images)</p> 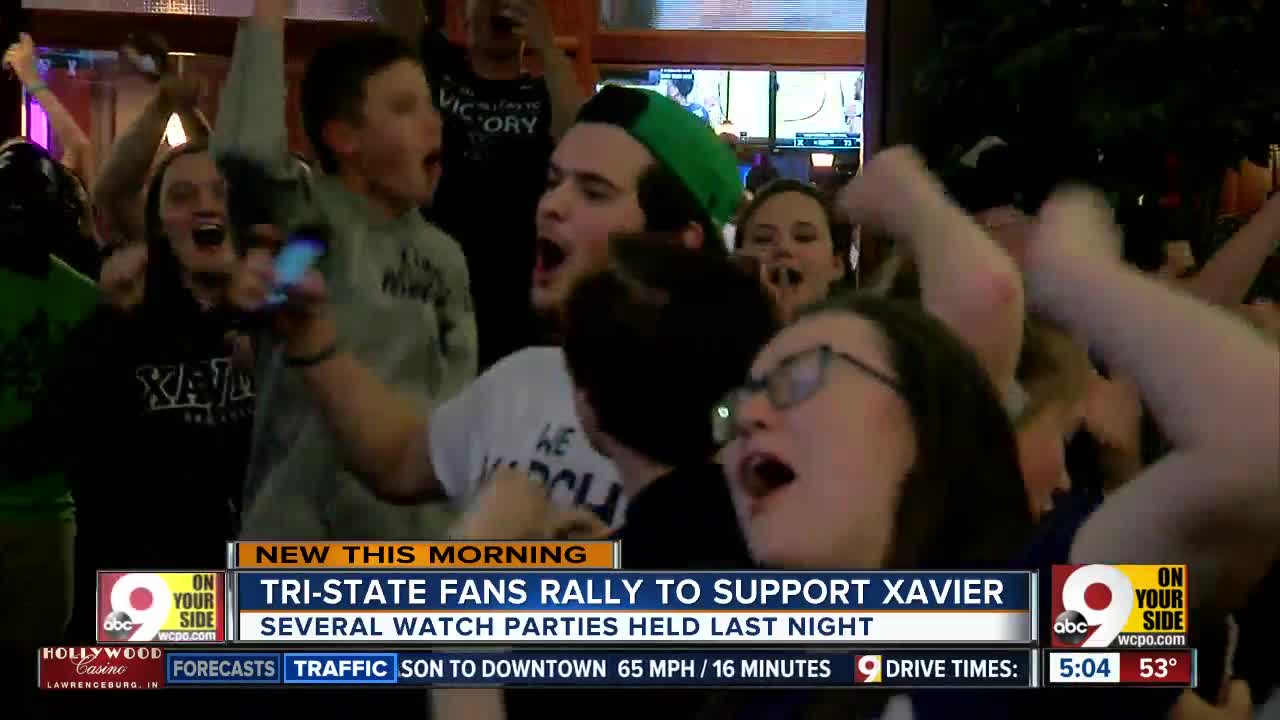 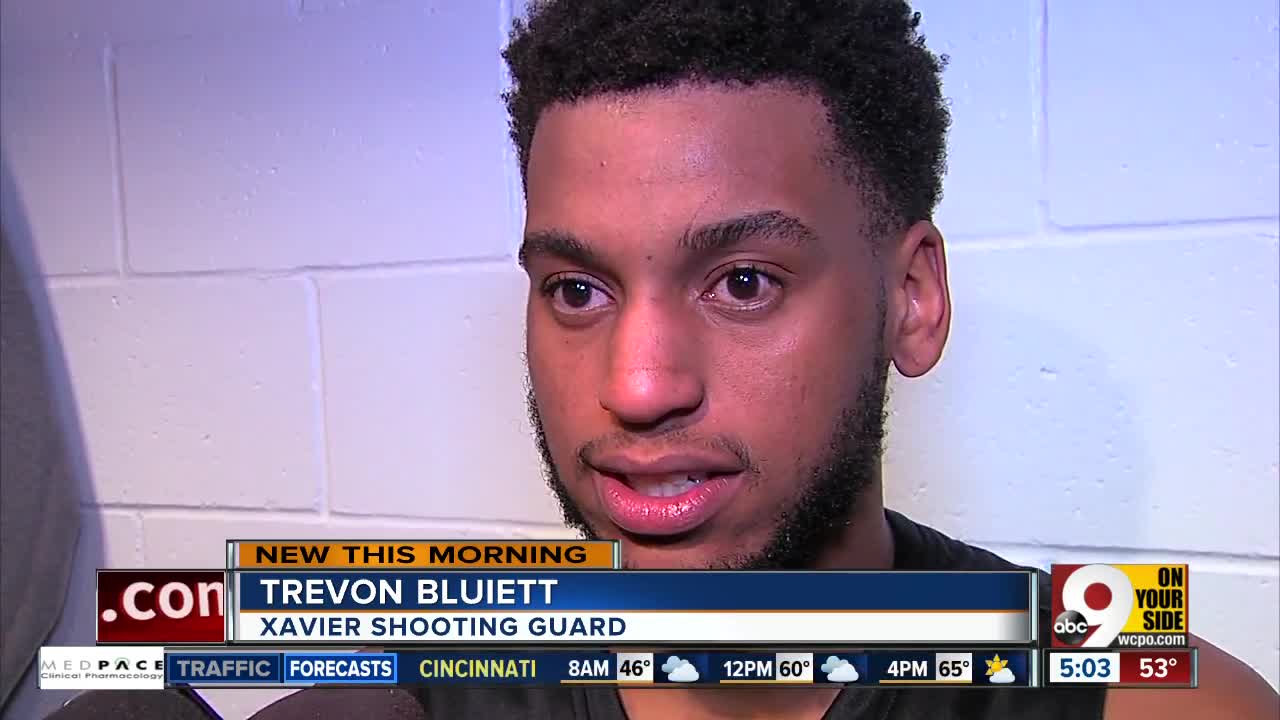 SAN JOSE, Calif. (AP) -- Not long after losing to Arizona's Sean Miller at the 2015 NCAA Tournament, Xavier coach Chris Mack jokingly said his friend should let him win the next one.

This was no gift between former colleagues.

The Musketeers earned this one and now they're headed to the Elite Eight for the first time in a decade.

Trevon Bluiett kept Xavier close with a big first half and the Musketeers made the clutch plays down the stretch against the West Region's No. 2 seed, upsetting Arizona 73-71 on Thursday night.

"I personally have so much respect for Sean and his staff," Mack said. "I know it's heartbreaking for them because they had a special year, a special season and I know it's tough. But today is a Xavier day."

Xavier (30-13) fought through a string of injuries and a late losing streak to reach the NCAA Tournament, then opened with a pair of upsets. The Musketeers passed their biggest test to date with confident performance against one of college basketball's storied programs.

Bluiett scored 18 of his 25 points in the first half to help Xavier keep up with the athletic Wildcats. The Musketeers tracked down Arizona after it tried to pull away in the second half, getting a late basket inside by Sean O'Mara while shutting down one of the nation's best offensive teams down the stretch.

Next up is their first Elite Eight since 2008 and third overall, a showdown with No. 1 seed Gonzaga on Saturday.

"We're all tough guys. We stuck together," said Xavier's J.P Macura, who had 14 points. "We're not really backing down from anyone."

Arizona (32-5) appeared to be in control after Allonzo Trier scored 15 straight points to help push the Wildcats' lead to eight with about four minutes left. Arizona stalled out on offense, though, failing to score over the final 2:52 as Xavier closed with a 9-0 run.

Trier had a final shot, but missed a 3-pointer with 8 seconds left and the Wildcats were unable to track down Malcolm Bernard as he dribbled out the clock.

Trier scored 15 of his 19 points in the second half and Dusan Ristic had 17 for Arizona.

"We weren't able to get good looks down the stretch and that's on me," Miller said.

Xavier made an improbable run to its fourth Sweet 16 in eight years under Mack, overcoming a late six-game losing streak and the loss of point guard Edmond Sumner to a torn left ACL.

The Musketeers were the lone double-digit seed left in the bracket after knocking off Maryland and Florida State in the first two rounds, setting up their second Sweet 16 game against Arizona in three years.

Arizona won the previous meeting to reach the Elite Eight, putting Miller one up on Mack.

Arizona led 37-35 at halftime of the rematch despite Bluiett's hot start, after turning 11 offensive rebounds into 13 second-chance points.

Xavier made 6 of its 8 first shots to take the second-half lead and Arizona answered with a run of its own, building a 67-61 lead behind Trier's outburst.

With super fan Bill Murray cheering them on — his son is an assistant coach — the Musketeers battled their way back with a 7-0 run, tying the game at 71-all with just under 2 minutes left, setting up the tense finish that left Arizona short.

"We didn't do a good enough job of defending them for the last four minutes of the game," Trier said. "Tough way to go out, especially knowing we had a lot of momentum. Just not an easy end to swallow.

Xavier was one of the hottest teams in the country despite its injuries and has a chance to reach the Final Four for the first time.

Arizona struggled down the stretch in a close game, leaving Miller short in his latest bid to reach the Final Four.

Lauri Markkanen was Arizona's leading scorer through the first two games of the tournament, but did not have much of an impact against Xavier. He finished with 9 points on 3-of-9 shooting, including 1 for 6 from 3-point range. He did grab eight rebounds, including five on the offensive glass.

The Finnish forward is expected to leave for the NBA, but said after the game that he has yet to make a decision.

MURRAY IN THE HOUSE

Murray's son, Luke, is an assistant coach under Mack and has become a huge Xavier fan, attending games whenever he gets the chance. Sitting across from Xavier's bench, he was a vocal supporter for the Musketeers and was a big part of the celebration after Xavier clinched it.