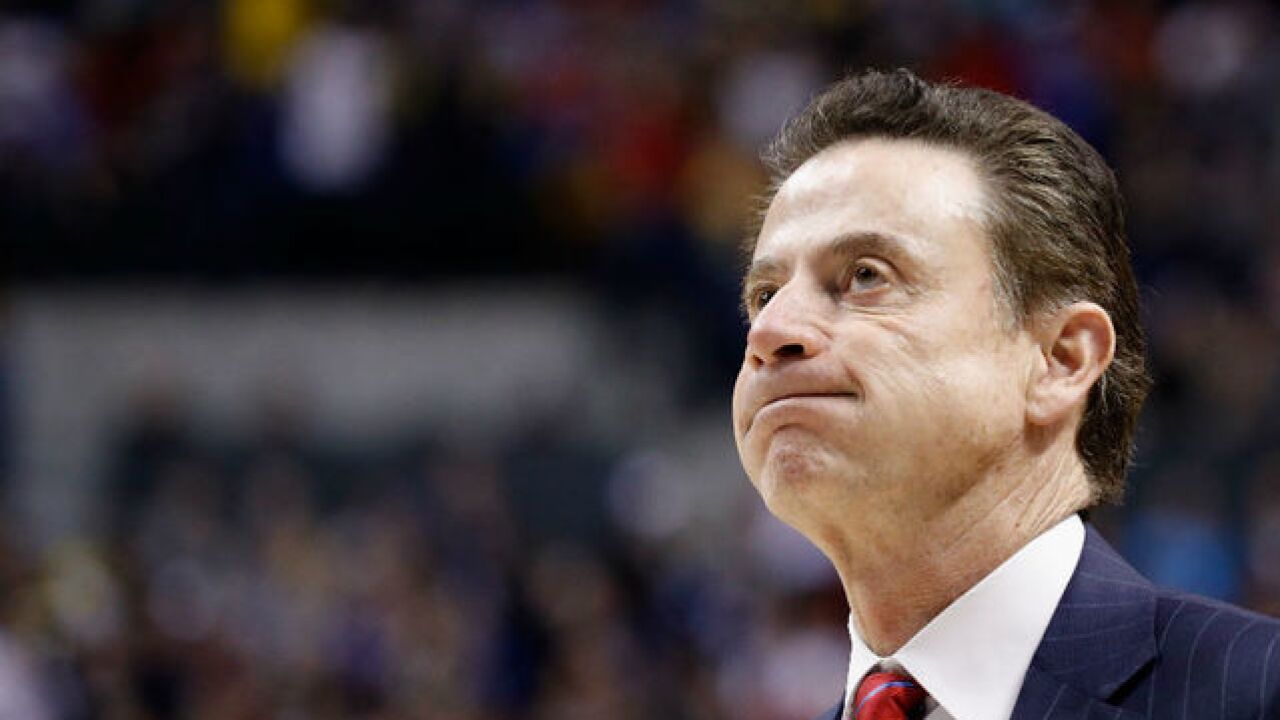 Image copyright 2017 Getty Images. All rights reserved. This material may not be published, broadcast, rewritten, or redistributed.
Joe Robbins | Getty Images
<p>Head coach Rick Pitino of the Louisville Cardinals reacts to their 69-73 loss to the Michigan Wolverines during the second round of the 2017 NCAA Men's Basketball Tournament at the Bankers Life Fieldhouse on March 19, 2017 in Indianapolis, Indiana. (Joe Robbins/Getty Images)</p>

Pitino was fired after a unanimous vote by the school's athletic association, according to an ESPN reporter.

BREAKING: ULAA has voted to terminate the contract of Rick Pitino "with just cause."

Rick Pitino’s attorney has told the Louisville Athletic Association that it should not fire the coach of the men’s basketball program because his client “could not have known” about activities alleged in a national federal investigation of the sport.

Steve Pence made his case Monday while the ULAA was meeting to discuss whether to fire Pitino nearly three weeks after the school acknowledged the program’s involvement in the investigation. The association board is still meeting and has not announced its decision.

The association, a separate body that oversees Louisville’s sports programs and comprised of trustees, faculty, students and administrators, on Oct. 2 authorized university interim President Greg Postel to begin the process of firing Pitino for cause after Postel placed him on unpaid administrative leave Sept. 27.

Pitino, 65, is not named in court complaints in the federal probe but Postel said in a disciplinary letter that the allegations violated his contract. Ten people that have been arrested in the corruption case , including four college assistant coaches and an Adidas executive.

Pence has contended that Louisville rushed to judgment and made his case before the board for 45 minutes on Monday that Pitino should be retained.

“The coach did not engage in any of this activity, he didn’t know about the activity,” Pence said. “I think we made a very compelling case to the board, I think they listened attentively and we’ll just have to wait and see what they say.”

Pence entered the meeting holding a poster board for presentation to the ULAA. The attorney later distributed a detailed 55-page document that includes letters of support for the coach, including one from David Padgett, who was named as Pitino’s interim replacement on Sept. 29.

The statements also included an affidavit from Pitino in which the coach said he “had no part — active, passive or through willful ignorance in the conspiracy described in the complaint.”

The attorney’s statement included a polygraph result indicating that Pitino was not deceptive in answering that he did not pay signee Brian Bowen’s family or knew that Bowen’s family was paid.

Pitino has $44 million remaining in salary and bonuses in a contract extension through the 2025-26 season. He was scheduled to earn a base salary of $5.1 million.

He has coached 16 years with the program, a run that included winning the 2013 NCAA championship but was tarnished by several embarrassing off-court incidents.