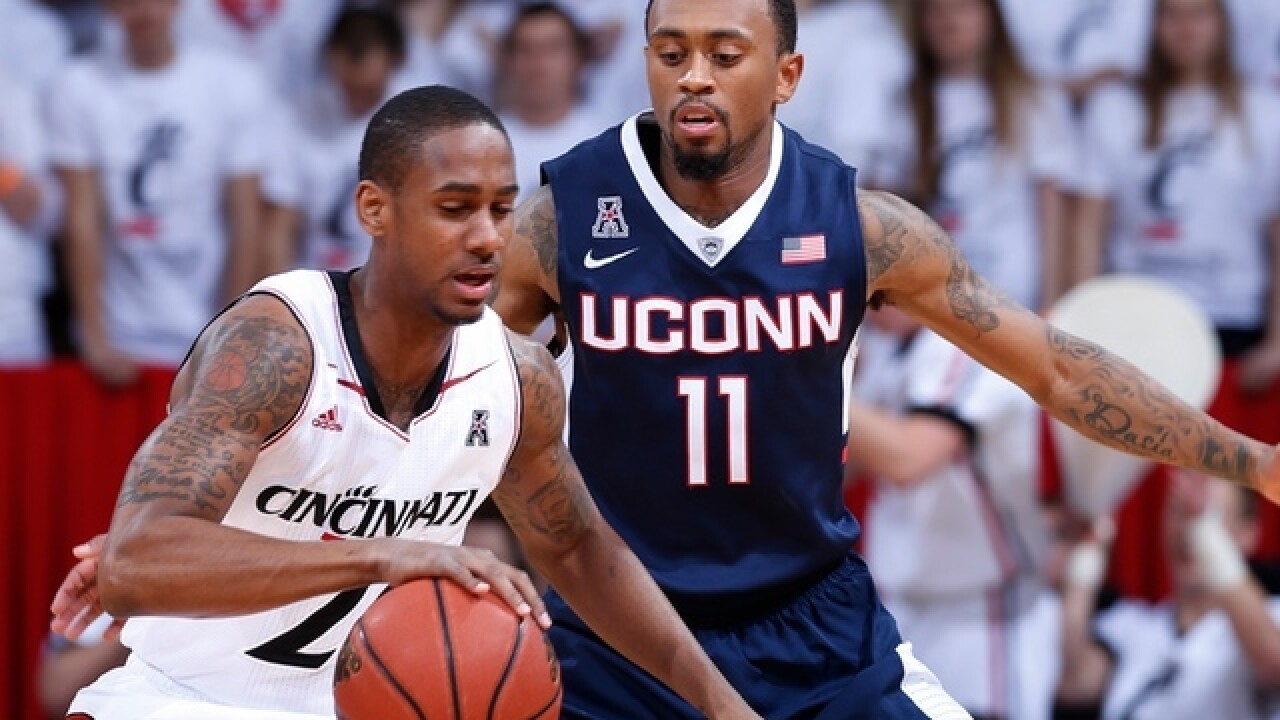 <p>Ryan Boatright #11 of the Connecticut Huskies defends against Farad Cobb #21 of the Cincinnati Bearcats in the first half of the game at Fifth Third Arena on January 29, 2015 in Cincinnati, Ohio. (Photo by Joe Robbins/Getty Images)</p>

SPOKANE, Wash. (AP) — Cincinnati will take the floor Friday for the first time since losing a four-overtime thriller to UConn in the American Athletic Conference quarterfinals, and guard Troy Caupain said the Bearcats have recovered from the heartbreaking loss.

"It was tough, but we got a lot of encouragement," said Caupain, who scored a career-high 37 points in that game. "It was not a loss where we keep our heads down. That game is going down in history."

RELATED: UC was robbed, Cronin said, and video showed it

Cincinnati ranks among the top teams in the nation in defense, allowing 62.9 points per game, and averaging five blocks per game. Opponents are shooting only 39 percent against them.

Coach Mick Cronin said the Bearcats have to rely on defense because they are not the type of program that draws the most athletic recruits.

"When you have to overachieve, you have to do it with defense," Cronin said. "We can't just rely on talent to win."

The Bearcats will be able to rely on forward Gary Clark, who said he is fully recovered from an ankle injury.

Saint Joseph's won the Atlantic 10 Tournament title to advance to the NCAA Tournament for the 21st time and second time in three years.

The Hawks are led by forward Isaiah Miles, who averaged 18 points and 8 rebounds and was the league's most improved player. Forward DeAndre Bembry, the A-10 player of the year, averaged 17 points, seven rebounds and more than four assists.

Coach Phil Martelli believes Miles is one of the most improved players in the country, after losing weight in the off-season.

This year, "his basketball I.Q. is at the next level, where he'll eventually end up," Martelli said. Miles is a potent symbol for the improvement of the Hawks, who were just 13-18 in 2015, Martelli said.

Their 27-7 record is the second-best in program history, behind the 2004 squad that went 30-2 and reached the Elite Eight.

But Cincinnati presents a stifling defense and a size problem, Martelli said.

Cronin said he is hoping his Cincinnati team will get hot.

"Somebody is going to have to ride the hot hands of a few players" to win in the tournament, Cronin said. "I want to be known as coach of the team that makes a lot of shots."

Miles said Saint Joseph's will look for mismatches and must play aggressive.

Things to watch in the Saint Joseph's-Cincinnati game:

THE SERIES: Cincinnati leads 3-1, but Saint Joseph's won the last meeting in 1969. In three of the games, the winner scored at least 100 points.

BEARCATS IN THE DANCE: Cincinnati is making its sixth straight appearance in the NCAA Tournament and 30th overall. They have a 44-28 record and won national titles in 1961 and 1962. They played in Spokane in the 2014 tournament, losing to Harvard in the first round. "We will try to stay a little longer this time," Cronin said.

HAWKS IN THE DANCE: Saint Joseph's has appeared in 20 previous NCAA Tournaments and are 18-24 in those games.

DOUBLE DOUBLES: The Bearcats have recorded 17 double doubles this season, most in the decade Mick Cronin has been coach. Gary Clark led with eight.

SPOKANE AGAIN: The Hawks' last trip to Spokane was in 2014, when they fell behind 60-11 early in the second half against Gonzaga on the way to a 94-42 loss that was the worst in program history. "We get the cold shivers when we think of Spokane," Martelli said.