Pat Summitt bonded with Lauren Hill before her death 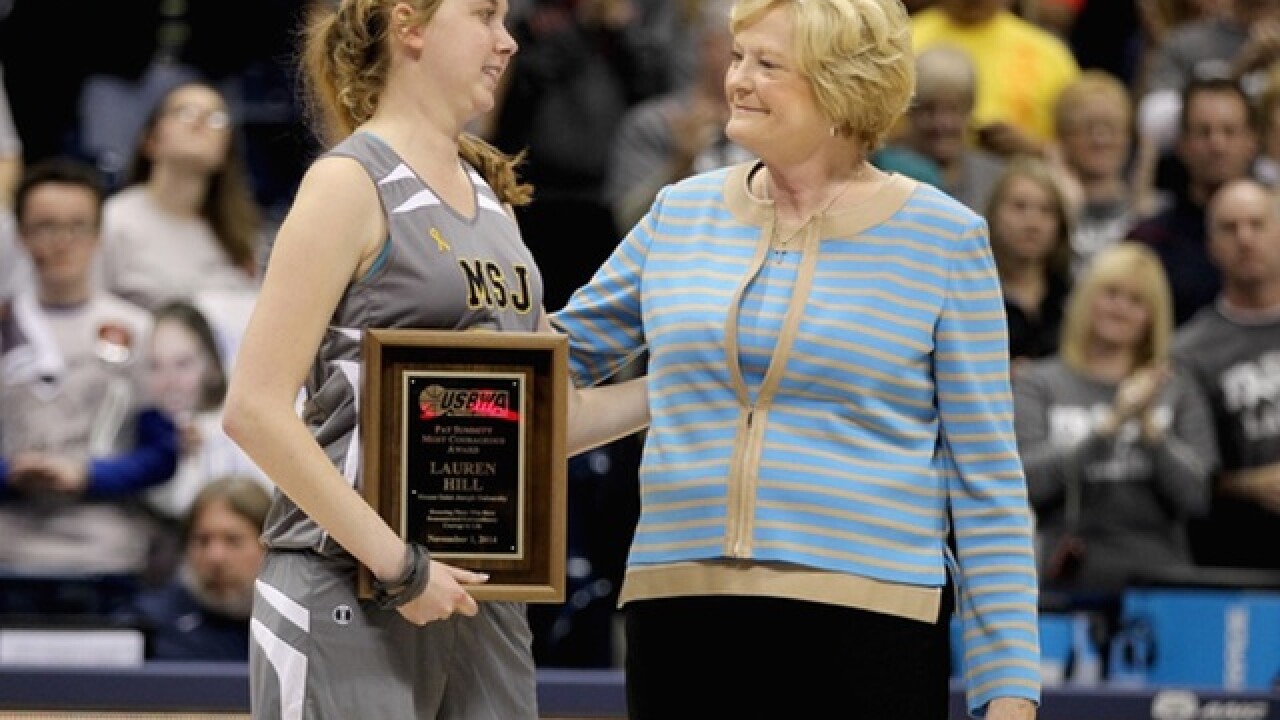 CINCINNATI – Lauren Hill's mother thinks she and Pat Summitt are talking about basketball in heaven today.

"I hope Lauren met Coach Summitt and showed her the way to heaven's basketball court and together they will look after each other and carry on the game," Lisa Hill said in a statement after the iconic Tennessee coach's death Tuesday.

Lauren Hill never got to play for Division I college basketball's winningest coach, but they will be linked forever by their love of basketball, courage and cruel fate. Hill, a freshman at Division III Mount St. Joseph, was dying of a rare brain cancer in November, 2014, but she had practiced for three weeks with her team and was determined to play in a college game. The buildup for the Mount's opener with Hiram College drew a sold-out crowd to Xavier's Cintas Center and one very, very special guest.

Summitt, retired and in the declining stages of Alzheimer's disease, rode in a car for four hours from Knoxville, Tennessee, on Nov. 2 so she could meet Lauren and present her with the Pat Summit Most Courageous Award from the United States Basketball Writers Association.

The two hugged during a halftime ceremony after Lauren scored one of her two baskets. Summit's condition did not allow her to speak to the crowd, but her son Tyler later said it was one of her happiest moments.

"It takes a lot for Pat Summitt to get inspired. Usually she's the one who is the inspiration," Tyler  said. "When she came back and we talked, she said, 'Man, I love Lauren. She's a fighter. I love that kid.'"

Lauren's mother recalled the heart-filled occasion in her statement Tuesday.

"Our family was honored to have the opportunity to meet Pat Summitt at Lauren’s first college basketball game," Lisa Hill said. "It was important to Coach Summit to be present during the presentation to Lauren of the Pat Summitt Most Courageous  Award. We got to speak with Coach off the court in private and she was sweet and genuine. Coach Summitt told Lauren how proud she was of her and that she was such an inspiration to women’s basketball and to keep up the fight.  Lauren commended Coach Summitt for all she had done for the sport as well and they exchanged hugs of gratitude for each other.

"Coach Summitt was a true icon in women’s basketball and she will truly be missed."

Mount St. Joseph coach Dan Benjamin said it was an honor he would never forget.

"She made the trip up from Tennessee to see us -- a small Division III program - but somebody so big and special ... Lauren was honored her by her presence.  And then giving her award through Tamika Catchings (Tennessee great), the Pat Summit Courageous Award, was pretty amazing. It's something I'll never forget in my life.

"That was perhaps the most special thing to Lauren, for Pat to show up and do that. This is so sad, but now God is getting someone who will watch over my baby on the court in heaven."

Lauren, 19, played briefly in four college games and scored 10 points, but she became a worldwide inspiration. She raised more than $2.2 million for The Cure Starts Now, a Cincinnati-based foundation doing underfunded research into her disease, DIPG. She died on April 10, 2015.

Summitt, who uplifted the women's game from obscurity to national prominence during her 38-year career at Tennessee, died Tuesday morning at the age of 64.

We are saddened to hear of the passing of the incredible @patsummitt. Lauren looked up to her so much! pic.twitter.com/cdUSt3ERpf

Like Hill, Summitt received an award for her courage - the Arthur Ashe ESPY Award in 2012, one year after she was diagnosed with Alzheimer’s disease and one month after she retired from coaching women's basketball at the University of Tennessee.

WATCH the ESPY's video below:

With an icy glare on the sidelines, Summitt led the Lady Vols to eight national championships - including a Final Four triumph in Cincinnati in 1997 - and prominence on a campus steeped in the traditions of the football-rich south until she retired in 2012.

Tyler Summitt issued a statement Tuesday morning saying his mother died peacefully at Sherrill Hill Senior Living in Knoxville surrounded by those who loved her most.

"Since 2011, my mother has battled her toughest opponent, early onset dementia, 'Alzheimer's Type,' and she did so with bravely fierce determination just as she did with every opponent she ever faced," Tyler Summitt said. "Even though it's incredibly difficult to come to terms that she is no longer with us, we can all find peace in knowing she no longer carries the heavy burden of this disease."

She announced in 2011 at age 59 that she'd been diagnosed with early onset dementia. She coached one more season before stepping down. At her retirement, Summitt's eight national titles ranked behind the 10 won by former UCLA men's coach John Wooden. UConn coach Geno Auriemma passed Summitt after she retired.

When she stepped down, Summitt called her coaching career a "great ride."

Summitt was a tough taskmaster with a frosty glower that could strike the fear of failure in her players. She punished one team that stayed up partying before an early morning practice by running them until they vomited. She even placed garbage cans in the gym so they'd have somewhere to be sick.

Nevertheless, she enjoyed such an intimate relationship with her players that they called her "Pat."

Known for her boundless energy, Summitt set her clocks ahead a few minutes to stay on schedule.

"The lady does not slow down, ever," one of her players, Kellie Jolly, said in 1998. "If you can ever catch her sitting down doing nothing, you are one special person."

Summitt never had a losing record and her teams made the NCAA Tournament every season. She began her coaching career at Tennessee in the 1974-75 season, when her team finished 16-8.

Summitt won 16 Southeastern Conference regular season titles, as well as 16 conference tournament titles. She was an eight-time SEC coach of the year and seven-time NCAA coach of the year. She also coached the U.S. women's Olympic team to the 1984 gold medal.

Summitt's greatest adversary on the court was Auriemma. The two teams played 22 times from 1995-2007. Summitt ended the series after the 2007 season.

"Pat's vision for the game of women's basketball and her relentless drive pushed the game to a new level and made it possible for the rest of us to accomplish what we did," Auriemma said at the time of her retirement.

Summitt was such a competitor that she refused to let a pilot land in Virginia when she went into labor while on a recruiting trip in 1990. Virginia had beaten her Lady Vols a few months earlier, preventing them from playing for a national title on their home floor.

But it was only in 2012 when being honored with the Arthur Ashe Courage Award that Summitt shared she had six miscarriages before giving birth to her son, Tyler.

She was born June 14, 1952, in Henrietta, Tennessee, and graduated from Cheatham County Central High School just west of Nashville. She played college basketball at the University of Tennessee at Martin where she received her bachelor's degree in physical education. She was the co-captain of the 1976 U.S. Olympic team, which won the silver medal.

After playing at UT Martin, she was hired as a graduate assistant at Tennessee and took over when the previous head coach left.

She wrote a motivational book in 1998, "Reach for the Summitt." Additionally, she worked with Sally Jenkins on "Raise the Roof," a book about the 1997-98 championship season, and also detailed her battle with dementia in a memoir, "Sum It Up," released in March 2013 and also co-written with Jenkins.

"It's hard to pinpoint the exact day that I first noticed something wrong," Summitt wrote. "Over the course of a year, from 2010 to 2011, I began to experience a troubling series of lapses. I had to ask people to remind me of the same things, over and over. I'd ask three times in the space of an hour, 'What time is my meeting again?' - and then be late."

Summitt started a foundation in her name to fight Alzheimer's in 2011 that has raised millions of dollars.

After she retired, Summitt was given the title head coach emeritus at Tennessee. She had been cutting back her public appearances over the past few years. She came to a handful of Tennessee games this past season and occasionally also traveled to watch her son Tyler coach at Louisiana Tech the last two years.

Earlier this year, Summitt moved out of her home into an upscale retirement resort when her regular home underwent renovations.

She is survived by son Tyler Summitt. He said a private funeral and burial will be held in Middle Tennessee and asked that the family's privacy be respected. A public memorial service is being planned for Thompson-Boling Arena.