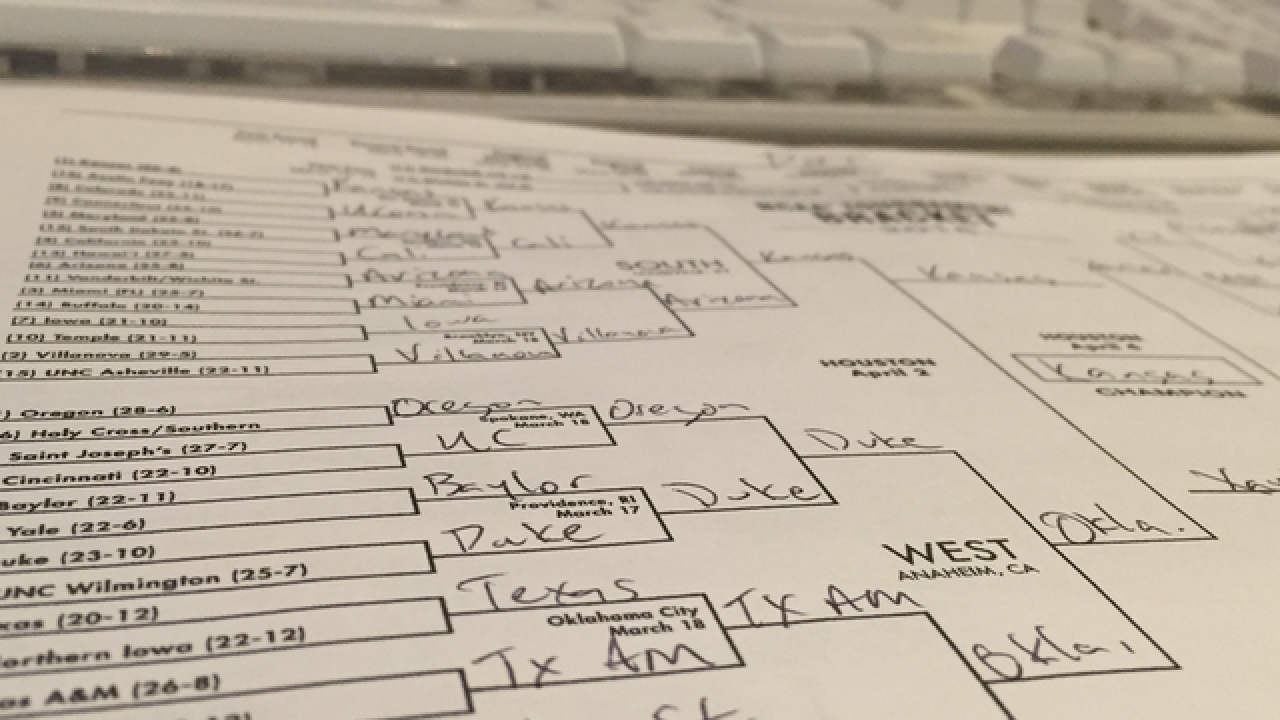 CINCINNATI -- "This is basketball, right?"

My coworker and next-desk-neighbor Austin Fast asked me this when he was about a third of the way through his NCAA men's basketball bracket.

That interaction is pretty indicative of how most of my web editor pals view sports. Or "sportsball" as they typically call any and all sporting events.

Needless to say, most of them were very hesitant to fill out a March Madness bracket -- a first for some of them -- and let me put it out on the Internet for everyone to see.

But they're great sports -- and I bribed them with a baked good prize for the best bracket.

So if you feel a little insecure about your own bracket (or your system for picking teams), have no fear. The WCPO web desk will put your bold -- possibly stupid -- predictions to shame.

To be fair, I'll start with my own (stupid) bracket.

I employed the expertise of the two most knowledgeable and passionate sports fans I know -- my 12 and 10-year-old brothers.

I went through my first round picks pretty quickly on my own. Some picks were obvious, but I was hung up on UC vs. Oregon.

I decided to give the Bearcats my only (dumb) upset in the first round on my bracket. This was against the advice of my two little analysts.

Landin, 12, gave me a hard time on this pick. When I started to Duke beating UC in the next round, he said "Well, if you have UC beating Oregon, you might as well have them winning the whole darn thing."

Eventually, I let UC lose. I had Xavier make to the Elite Eight, then lose to the Tar Heels, who I (begrudgingly) had winning it all.

I had my Butler Bulldogs get all the way to the Midwest finals -- but I don't quite think this is their year.

In the end, Landin and Eli, 10, argued through all of dinner over Kansas vs. UNC. Eli said Kansas, Landin said UNC. Landin's case was a little more compelling (Roy Williams and psychological warfare were discussed), so I put the Tar Heels winning it all.

I mentioned Austin earlier -- he's the one who double checked that the brackets were, indeed, for basketball.

I sat next to Austin as he filled out his bracket. His strategy was multi-faceted; in the beginning, he was paying close attention to the teams' seeding.

Then, he changed gears and began choosing teams based on their names -- particularly, Austin Peay. (Get it? His name is Austin...he also advanced Stephen F. Austin to the Sweet Sixteen.)

He has the Austin Peay Governors going to the Elite Eight, but has them losing to Miami, his predicted champion. Austin went to Miami (of Ohio). I told him that this is Miami in Florida, but he was already pretty sold on making decisions nostalgically with an homage to his college.

In the Midwest, he sent Butler all the way through to the championship game. Which is fine by me, but I worry that my pride may have swayed his picks. That, or he's just trying to score some brownie points.

As for some other picks, Austin made choices based on the scenery and national landmarks near the schools (Hawaii, Oregon). Gonzaga also got to the Sweet Sixteen because "it sounds like Gorgonzola and I love blue cheese."

Next is James, who worked during the Selection Sunday show and was tasked with relaying anything noteworthy from the ceremony to our site and app. This should give him an edge, in theory.

Sports knowledge level: He won the "9 On Your Sideline" fantasy football league, but initially drafted four quarterbacks and no kickers.

James is a strange bird. He marches to the beat of his own drum. His Final Four include Villanova, Xavier, Oregon and Seton Hall. He has Villanova winning it all.

But I found out he picked most of his winners based on where his friends went and go to school.

"Two of my friends played sports in college and they both went to Villanova cause they're really good at sports," he said.

James gave a nod to his New Jersey roots with his picks: He had 16-seed Farleigh Dickinson advance to the Elite Eight (after a first four game, mind you) only to be beaten by Xavier.

"I know that schools from New Jersey do really well," he said. "Oh, and Xavier is just really good this year. I know that from posting AP stories."

He also said he advanced Seton Hall because he listened to the Seton Hall radio station in high school.

He was also very excited for the Oregon vs. Oregon (State) matchup he orchestrated. He was very proud of himself...

"I can't wait for that Oregon vs. Oregon matchup," he said at work on Tuesday. "I bet Oregon will win."

The only exception to the phenom of web editors sports is Greg Noble.

Sports knowledge level: 10+ years as a sports editor -- so you tell me.

Greg is living sports and Cincinnati encyclopedia. But he's modest and said he probably wouldn't have a very good bracket.

"I don't like sports anymore," he told me when I asked why he doesn't watch the Super Bowl. "Now I know too much."

But if I had to put money on the best bracket on the web desk, mine would be on Greg.

"I like UK," he said as I looked over the finished product. He advanced Kentucky to the Final Four, beating UNC.

For the two local teams in the tournament, Greg's calls are pretty daring: Xavier beating Weber State but losing to Wisconsin and UC beating Oregon and Baylor before falling to Oklahoma.

"UC can shoot the ball when the clock runs slow," he said when I asked about UC.

"You know, they say you can usually have a pretty good bracket if you just follow the seeding," he said. "But you also have to go with your gut."

He also told me to feel free to change any of his picks (I didn't).

For someone who prides himself on not following sports, Pat put a lot of time into both of his brackets. Yes, he made two.

Sports knowledge level: He scored last-minute tickets to the Bengals/Steelers wild-card game and followed the game up with a Facebook status saying "What's football?"

Pat's first bracket was full of safe bets. Pretty much everything went according to seeding.

The few outliers: Xavier and Gonzaga.

Pat said he favored local teams (he has UC losing to Oregon, though) and he had Xavier playing UK in the Sweet Sixteen. He has Xavier advancing to the championship but losing to the Jayhawks.

His Gonzaga pick was purely out of nostalgia, he said.

"Back when I was in middle school and we actually cared about this stuff, I think it was a really good year for Gonzaga or something," he said. "So I always have them win at least one game."

He labeled it "ALL THE UPSETS! LITERALLY. EVERY. ONE."

His upset bracket's Final Four consists of Austin Peay, Holy Cross, Farleigh Dickinson and Hampton. Peay and FDU go on to the championship, with the knights emerging victorious.

If that's how this season's tournament goes down there will probably be a LOT of people who quit sports spectating forever.

Buckle up, it's time for Joe's bracket.

Sports knowledge level: I heard the SportsCenter jingle a few weeks ago for the first time in my life.

He worked during the All-Star Game -- I remember him asking how soon "after the coin toss" the homerun derby would start.

His response to seeing the empty bracket -- "Honestly, the bracket just looks like somebody threw some state names into a hat and picked them at random (Austin Peay being the name of the hat manufacturer, and the Dry Clean Only tag somehow got mixed up in the bunch)."

But his bracket wasn't really that bad.

Joe mostly has high-seeded, big name teams advancing on his bracket. However, some of the big name teams (maybe in college football) aren't exactly poised to beat the little guys.

Take USC for example -- they're an eight-seed. Joe has them beating UNC, then Kentucky, then Xavier and Virginia, going all the way to the championship.

But Joe opted for the David-over-Goliath in Gonzaga vs. Iowa State and Syracuse vs. Michigan State.

Gonzaga, he said, because it's a Jesuit school (he went to a Jesuit high school and a Jesuit college).

Also, he said "I went with a lot of Plains states because it seems boring there, so they'd have no distractions."

For later, @Marais_JD is making me do an NCAA bracket... and explain my rationale. The answer to all will be "I have heard of this team."

I saved our fearless leader for last -- Max.

Bracketeer: Maxim Alter. Sports knowledge level: He has seen the Allen Iverson "Practice" interview, but he couldn't tell you who Allen Iverson is or who he played for.

Max dragged his feet the longest on filling out a bracket. And he whined the entire time he filled it out.

"They have a better K/D than these guys." For those of you who like your reality not virtual, a K/D = kill to death ratio in video games.

Max asked two of his next-desk-neighbors to explain where to write team names. He asked anyone who would listen who he should pick for every. Single. Matchup.

"If Texas and Texas A&M play each other, will the world explode?" he asked.

Of course, we didn't help him.

He ended up with an interesting Final Four -- Duke, Villanova, Michigan and Xavier -- with Villanova winning it all. He begged everyone for validation on that pick, but we wouldn't give it to him.

We'll check back in after the tournament to tell you whose bracket did the best (and worst).