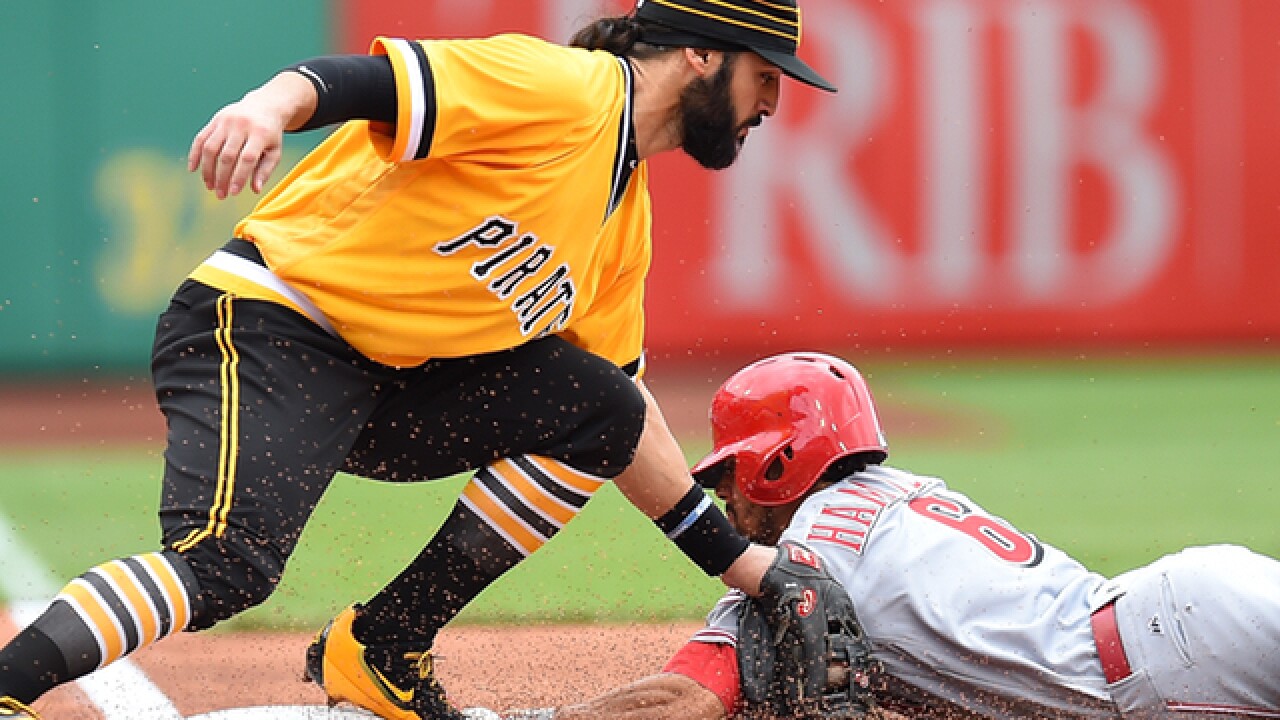 Joe Sargent
<p>PITTSBURGH, PA - MAY 1: Billy Hamilton #6 of the Cincinnati Reds safely steals third base in front of Sean Rodriguez #3 of the Pittsburgh Pirates during the first inning on May 1, 2016 at PNC Park in Pittsburgh, Pennsylvania. (Photo by Joe Sargent/Getty Images)</p>

The Pirates had won six in a row.

Eugenio Suarez led off the Reds 11th with a triple past diving left fielder Starling Marte and scored on Schebler's hit off Ryan Vogelsong (1-1).

Schebler had entered earlier in a double switch. In the ninth, he doubled home Adam Duvall for a 5-4 lead.

The Reds won for only the second time since being no-hit by the Cubs' Jake Arrieta on April 21.

Gregory Polanco and John Jaso homered for the Pirates. Pittsburgh committed a season-high four errors and misplayed other balls.

Jaso hit a solo home run with two outs in the ninth off Ross Ohlendorf that made it 5-all. The drive landed in the first row of seats atop the 21-foot wall in right field.

Polanco led off the fifth with his third homer. It became the 39th home run ball to reach the Allegheny River in the 16 seasons of PNC Park.

The Pirates rallied to tie the game during each the seventh, eighth and ninth innings.

Cincinnati turned to 28-year-old Tim Adelman to make his major league debut after putting scheduled starter Raisel Iglesias on the disabled list earlier Sunday because of an impingement in his right shoulder.

Adelman was pitching in independent leagues in 2012-13 before working his way up the Reds organization from Single-A over the past two-plus years. He allowed five baserunners over six-plus innings and was lifted with a 3-1 lead after allowing a leadoff single to Marte in the seventh.

Adelman's chance at his first major league win were dashed when, after one out, Sean Rodriguez hit an RBI triple and scored on pinch hitter Matt Joyce's broken-bat single.

About Iglesias, manager Bryan Price said, "it doesn't sound like it's going to be a long-tenured stint on the DL." ... Price said RHP Homer Bailey (Tommy John surgery) had "a slight setback" during a rehabilitation outing in Double-A. "We're going to let it cool down and not throw for a few days and then get him back going," Price said. ... Duvall remained in the game after colliding with the outfield wall attempting to make a play on Rodriguez's triple in the seventh. Duvall was checked by the training staff for several minutes after he made a dive into the left field corner.

Cincinnati heads back home to host a familiar face in RHP Johnny Cueto, who will start for San Francisco on Monday at Great American Ball Park. Cueto (4-1, 2.65) spent eight seasons with the Reds, making his first 213 starts before being traded to Kansas City last summer for, among others, LHP Brandon Finnegan. Finnegan (1-1, 3.86) will start vs. Cueto.