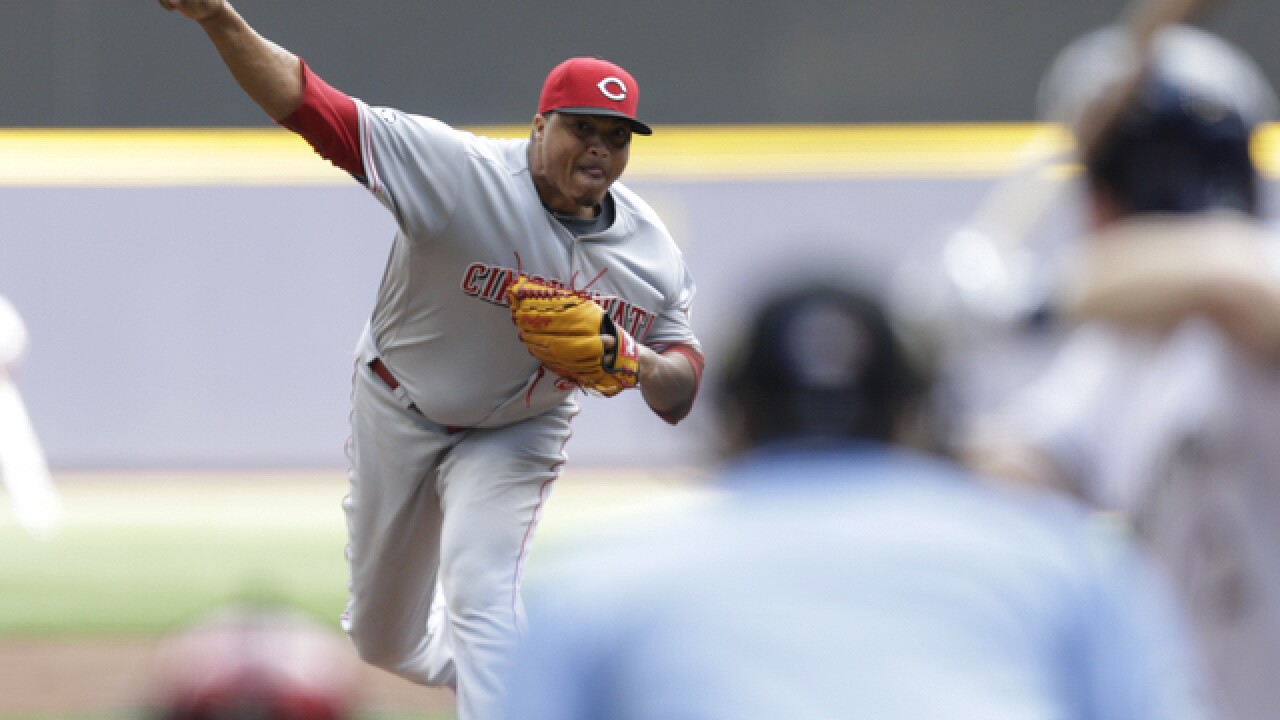 Mike McGinnis
<p>MILWAUKEE, WI - MAY 28: Alfredo Simon #31 of the Cincinnati Reds pitches during the first inning against the Milwaukee Brewers at Miller Park on May 28, 2016 in Milwaukee, Wisconsin. (Photo by Mike McGinnis/Getty Images)</p>

MILWAUKEE (AP) -- Six hit batters between two teams. An ejected starting pitcher. An overturned double play in the ninth that allowed the go-ahead run to score.

The Cincinnati Reds ended nearly two weeks of misery in a wild Saturday afternoon in Milwaukee.

Joey Votto scored the go-ahead run in the ninth after an inning-ending double play was overturned on review, and the Reds rallied from a five-run deficit to snap their 11-game losing streak with a tense 7-6 win over the Brewers.

"Yeah, we kept fighting. Got some timely hits there. Kind of worked out," said outfielder Adam Duvall, who drove in Votto in the ninth with RBI groundout.

But first the umpires had to take a look.

They ruled after the review that infielder Scooter Gennett didn't have his foot on second while trying to turn the double play on Duvall's bouncer.

The review came after manager Bryan Price, who was out of challenges, spoke to crew chief Jim Joyce. Reds video coordinator Rob Coughlan studied the replays.

"He noticed that it was just barely off, but you have to go for it," Price said.

Gennett thought he was on the bag. He said he was surprised it was reviewed because the Brewers had easily beaten both runners.

"It's kind of how I've always turned double plays. I guess I just have to do a better job of staying on just a tick longer," Gennett said.

Blake Wood (4-1) tossed two scoreless innings for the win. Tony Cingrani gave up a two-out walk to Chris Carter in the ninth, but struck out pinch hitter Martin Maldonado to end the game and picked up his fourth save.

Duvall had a three-run homer in the seventh to tie the game at 6.

Brewers manager Craig Counsell sounded frustrated about the replay rules, especially after Price had burned his two challenges in the first.

Counsell said that he heard from umpires that it doesn't matter if a team is out of challenges, that they'll check anyway in situations like the one that arose in the ninth.

"We've certainly benefited from replay calls, so I'm not going to say it's one-sided, but this is the whole can of worms we've opened up by changing the rules," Counsell said.

Simon was ejected in the fifth after hitting Brewers starter Chase Anderson with a pitch in the left shoulder. An inning earlier, Anderson had hit Simon with a pitch with two outs, a sequence that thwarted Tyler Holt's potential steal of home with the Reds trailing by a run. The Brewers later got out of that jam.

Counsell said there no intent when Anderson plunked Simon, who initially squared away as if to bunt. Anderson said he rushed his delivery as he saw Holt break.

"It definitely was not on purpose. I tried to rush and I slipped and the ball slipped out of my hand," Anderson said.

Simon, when asked if he tried to hit Anderson, declined comment.

"The umpires said they felt there was an intent, obviously because Alfredo had been hit," Price said.

LHP Jon Moscot (left intercostal) will do his side work and throw a bullpen session at Triple-A Louisville before joining the team next week on the next stop of their road trip in Colorado. ... RHP Michael Lorenzen (right elbow) will make another start in an extended spring training game on Tuesday before moving his rehab to one of the Reds' minor-league affiliates.

LHP Brandon Finnegan (1-3) is coming off his first career complete game, when he allowed five hits and four walks over eight innings in a 1-0 loss on Monday against the Los Angeles Dodgers and ace Clayton Kershaw.