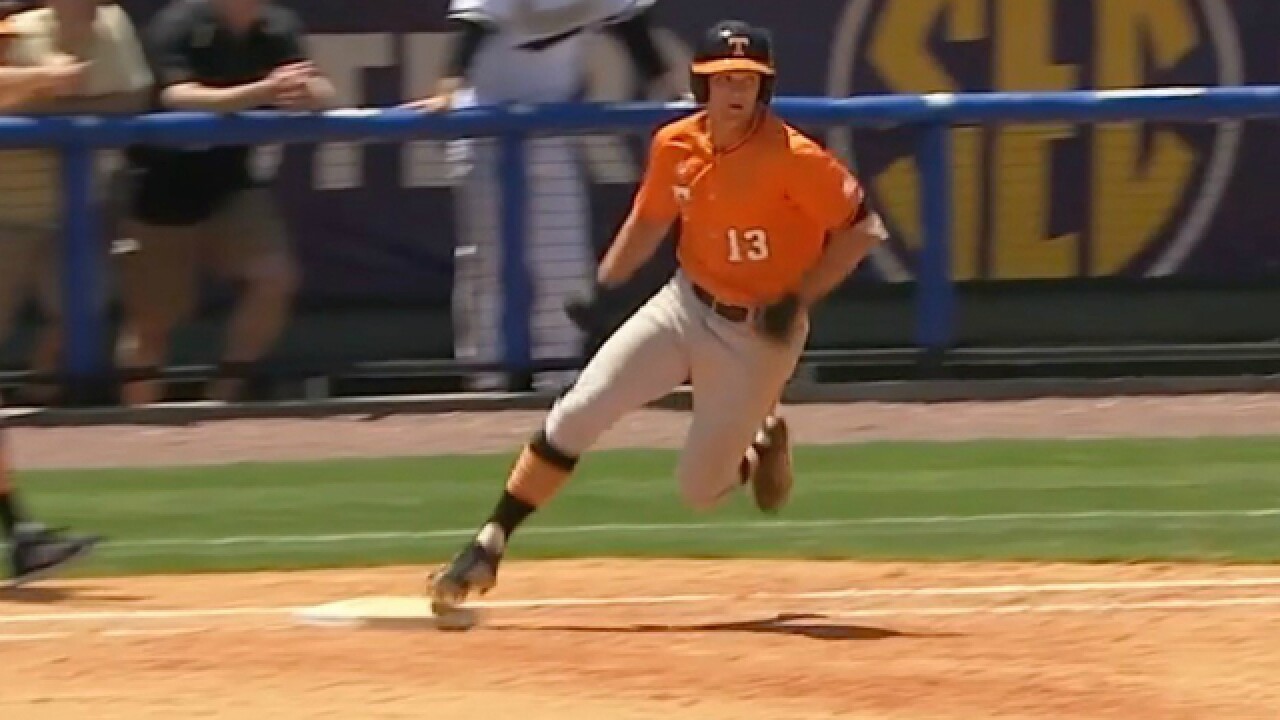 The Reds took Nick Senzel, a third baseman from Tennessee, with the second pick in Major League Draft Thursday night. Dan O’Dowd tabbed Senzel as the next Scott Rolen on the MLB Network broadcast.

Draft Day is big on hyperbole.

Rolen played 17 years in the big league, hit 316 home runs and won eight Gold Gloves. Even Senzel knows the comparison is a reach.

“That’s crazy,” he said. “Scott Rolen is one of the best all-time to play for the Reds.”

Again, everyone is great on Draft Day. When the Reds took Brandon Larson in 1997, the club’s super scout Al Goldis said Larson was “Robino Ventura with speed.” Didn’t turn out that way, of course.

What Senzel turns out to be will play out over the long haul, but as far as the draft goes, he is a safe bet. He was considered the best college bat in the draft and he played in the best college conference, the SEC. Senzel, 20, was the MVP of the Cape Cod League last summer. That helped move him up the draft charts. He solidified his position as a top pick with an outstanding junior year for Tennessee.  Senzel hit .352/.456/.595 this year for Vols with eight home runs and 59 RBI.

PODCAST: Reds in good shape for the draft

The Phillies took Mickey Moniak, a high school outfielder from California, with the first pick. There was speculation that the Reds would go for Florida left-hander A.J. Puk, who was the top-rated pick in the draft by Baseball America. Senzel was rated seventh by BA.

Senzel (pronunciation guide: Rhymes with Denzel Washington’s first name) certainly fills a need for the Reds. Seven of their top 10 rated prospects are starting pitchers. But the Reds have always been a best-player-available team when it comes to the draft.

"We’re really excited, this is the guy we wanted,” Buckley said. “He’s a very polished player, one of the better hitters, if not the best hitter, in the draft. We think his power will improve the more he plays. He’s a complete player, runs, throws and plays his position well.”

But it’s extremely rare for even a college player it to make to the big leagues in less than two full seasons in the minors. So, we’ll wait and see.

Senzel did not know the Reds were going to pick him.

Senzel is represented by Scott Boras, the highest profile agent in baseball. Senzel is ready to play, but Boras drives a hard bargain. Things are generally not easy for the club when he’s involved.

“I’m ready but as you guys know, there is business to be taken care of. I got the best team in the world that takes care of that,” Senzel said. “They’ll let me know when the business side is taken care of. When it’s taken care of, I will be ready to go.”

“Senzel comes from a lauded 2013 Tennessee high school class that included fellow top prospects Jordan Sheffield and Will Craig. Senzel played at the powerhouse program at Farragut High alongside Kyle Serrano, but he was not drafted out of high school. Senzel showed solid tools at the East Coast Pro showcase prior to his senior year, but was not a high priority player for scouts to evaluate in high school. After two years at Tennessee, Senzel’s stock exploded last summer when he was the MVP of the Cape Cod League. His carrying tool is his right-handed bat. Senzel is a patient hitter with a mature approach and a swing that’s geared up for line drives. He makes consistent hard contact in games and in batting practice. Senzel shows the ability to drive the ball with authority to the opposite field or to his pull-side gap. He hits more for doubles than home runs at this point, but he can show raw power in batting practice when he’s asked to, leading some evaluators to believe that he will develop more game power as he continues to mature. This spring, Senzel has shown significantly improved defense in the infield, shifting to shortstop later in the season from third base. He reacts quickly and shows solid first-step quickness. Senzel has average arm strength and projects to stay in the left side of the infield. He runs well, with average speed down the line, but he has good base-running instincts, allowing his speed to play even better.”