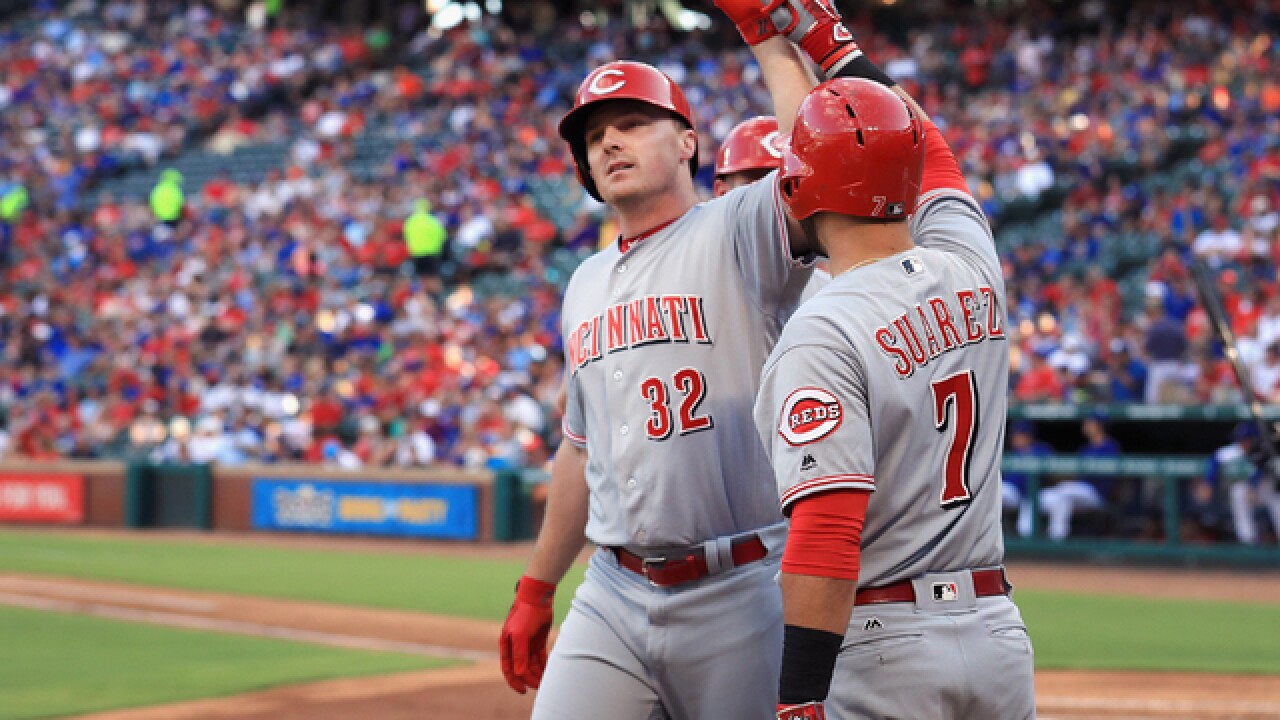 ARLINGTON, Texas -- Cole Hamels struck out eight in six solid innings, Prince Fielder had a two-run single and the Texas Rangers beat the Cincinnati Reds 6-4 on Wednesday night for a split in the two-game interleague series.

Ian Desmond hit his 12th homer for Texas after entering in the seventh inning on a night when the center fielder got a scheduled break from the starting lineup. Shin-Soo Choo led off the eighth with his second homer.

The Rangers, who have the American League's best record at 47-26, went ahead to stay with four runs in the fourth off Dan Straily (4-4). The Rangers had the bases loaded without a hit before Adrian Beltre had an RBI single and Fielder immediately followed with a hard liner to right.

Eugenio Suarez hit a three-run homer in the eighth for the Reds, his 14th of the season coming off reliever Jake Diekman.

Sam Dyson worked the ninth for his 15th save in 16 chances. He has converted 13 straight since being named the closer May 18, the most in the majors during that stretch.

Strailey faced the minimum nine hitters his first three innings, and also retired the last nine batters he faced. But the first five Rangers reached to start the fourth inning, including two walks and a hit batsman to load the bases with no outs before the consecutive singles by the sluggers in the middle of their lineup.

Reds: 1B Joey Votto missed both games in Texas after getting a stomach bug. He was at the ballpark Wednesday after not even going there Tuesday for the series opener.

Rangers: LHP Derek Holland was put on the 15-day DL with shoulder inflammation, and the Rangers said RHP Colby Lewis would be going on the DL as well with a strained lat muscle. Lewis won't throw for at least four weeks. ... RHP Yu Darvish, on the DL with right shoulder discomfort, threw off flat ground and had no issues.

Reds: After a 4-5 road trip, the Reds go home for their next seven games. They host San Diego on Thursday night.

Rangers: Texas has a day off before opening a three-game series at home against the Boston Red Sox on Friday night.