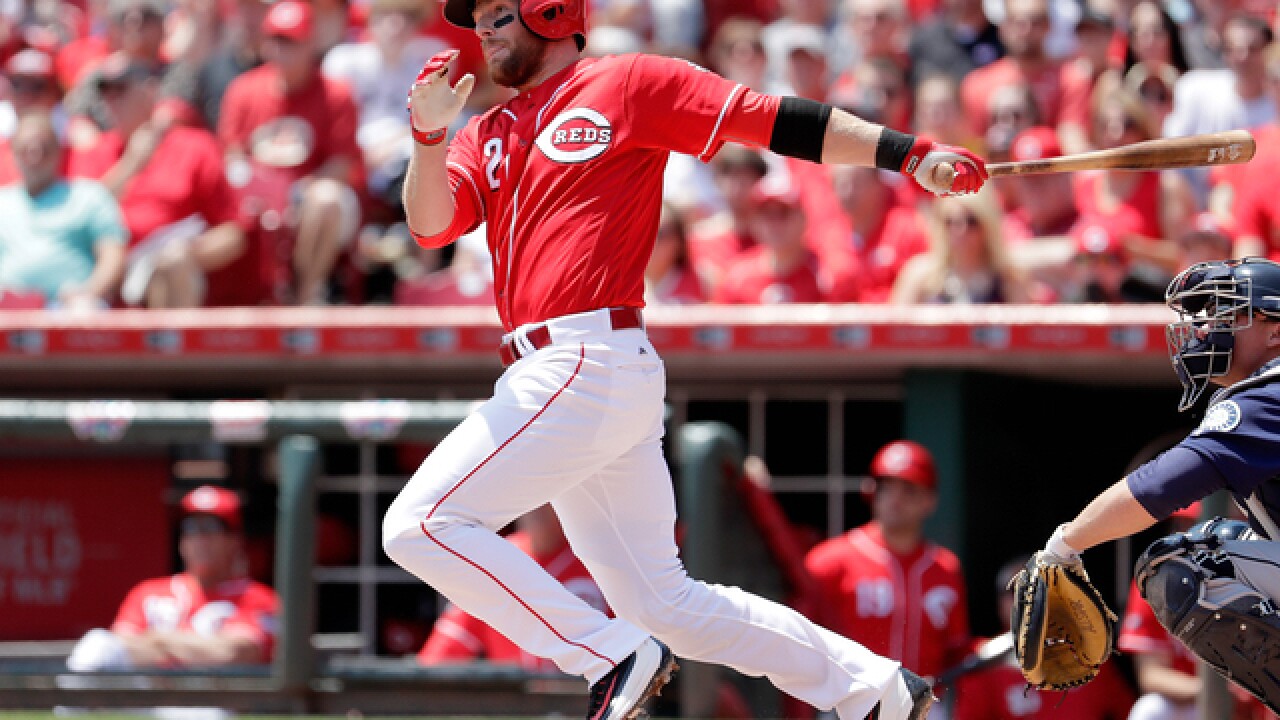 Andy Lyons
<p>CINCINNATI, OH - MAY 22: Zack Cozart #2 of the Cincinnati Reds hits a double in the first inning against the Seattle Mariners at Great American Ball Park on May 22, 2016 in Cincinnati, Ohio. (Photo by Andy Lyons/Getty Images)</p>

Steve Clevenger hit a tiebreaking single during a three-run fifth inning. The Mariners won all three games at Great American Ball Park and posted their fourth win in a row.

The Reds went 0-5 on their homestand. Brandon Phillips drove in two runs with a double during a three-run first inning and Adam Duvall later hit his eighth homer.

Wade Miley (5-2) shook off that rocky first inning to last six innings, giving up eight hits and four runs with six strikeouts and a walk. He improved to 5-0 over his last six starts, all Seattle victories.

Steve Cishek pitched a perfect ninth for his 10th save.

Alfredo Simon (1-5), who allowed a career-high 10 runs while not getting through the fifth inning of his previous start, gave up nine hits and five runs in five innings.

The Mariners have won eight of their last nine one-run decisions after starting the season 1-5. They are 13-2 against the Reds in interleague play.

Martin, who's batted higher than seventh just once this season, excelled in the leadoff spot. He scored the first run on Cano's sacrifice fly.

Jay Bruce capped Cincinnati's first-inning burst with a sacrifice fly. Duvall led off the fourth with a 457-foot drive deep into the left-center field seats.

Miley led off the third with a single in his first plate appearance of the season, his first hit since he was in the National League with Arizona in 2014. He scored on Cano's single and Nelson Cruz followed with an RBI groundout.

Bruce returned to the starting lineup after sitting out a day with a sore left knee. He got hurt banging into the outfield wall on Friday.

Open an 11-day, 10-game road trip at Dodger Stadium. LHP Brandon Finnegan (1-2) is scheduled to start after giving up a career-high eight hits in 5 2/3 innings last Wednesday against Cleveland. Clayton Kershaw (6-1) is set to pitch for Los Angeles.