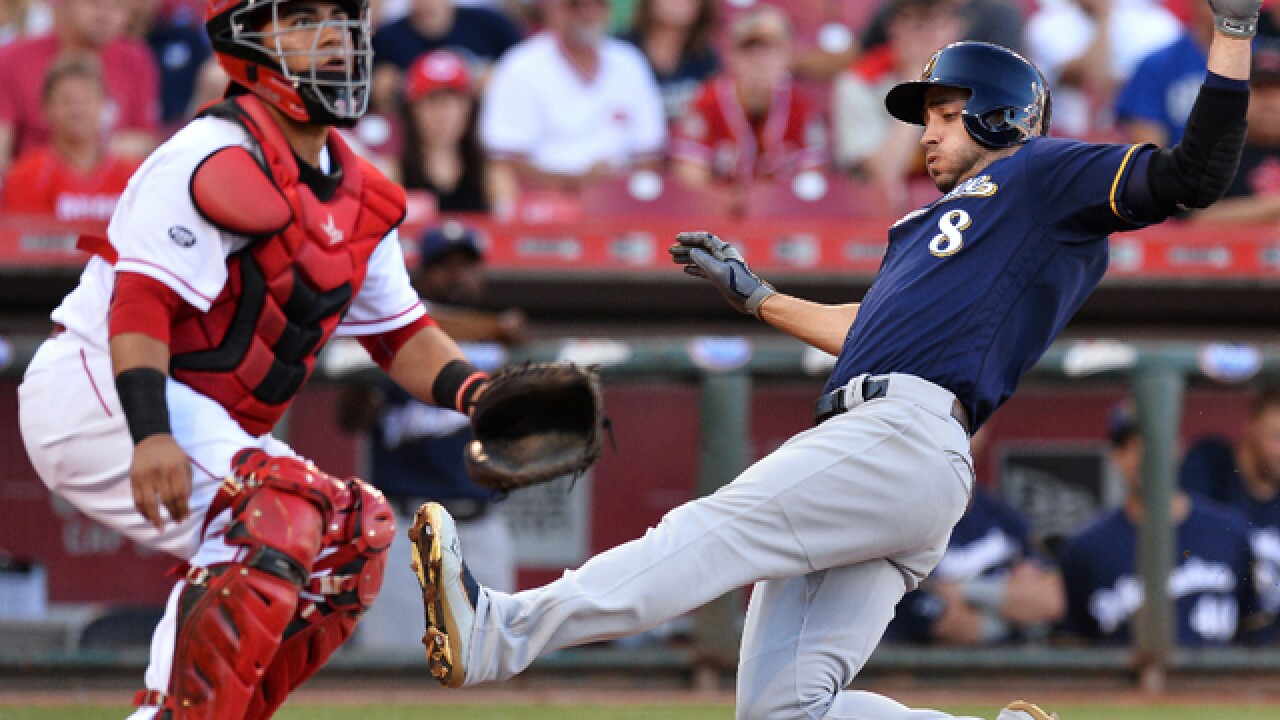 <p>CINCINNATI, OH - JULY 16: Ryan Braun #8 of the Milwaukee Brewers scores from second base in the first inning as Ramon Cabrera #37 of the Cincinnati Reds awaits the throw at Great American Ball Park on July 16, 2016 in Cincinnati, Ohio. (Photo by Jamie Sabau/Getty Images)</p>

CINCINNATI (AP) -- Jonathan Lucroy missed the two-strike pitch but got the call. His next swing produced a home run that sparked a big inning.

Lucroy's two-run homer started Milwaukee's five-run third inning, and the Brewers rolled to a 9-1 victory over the Cincinnati Reds on Saturday night with their best offensive showing in nearly two months.

The bottom two teams in the NL Central have split the first two games of their series.

Lucroy connected off left-hander John Lamb (1-7) in the third as he continued taking advantage of the last-place Reds. The All-Star catcher is 14 for 31 (.452) against Cincinnati this season, with five of his 12 homers and 15 RBIs.

First, there was some controversy. Lucroy swung at a two-strike pitch that landed in the dirt, but plate umpire Quinn Wolcott heard a sound and called a foul tip, extending the at-bat. Replays indicated that Lucroy missed the ball, but the tip of his bat hit the plate, causing the sound. Lucroy initially thought his bat hit the ball but later realized he'd hit only the plate.

Reds manager Bryan Price immediately came out to argue but got nowhere.

"It was an honest mistake," Lucroy said. "I don't blame (Price). I don't blame him at all. I really thought I'd foul-tipped it. He (Wolcott) did, too. That's one of those crazy things that happen during a game."

When Price went out to change pitchers later during the long inning, he got into it again with the umpire, who gave him his third ejection of the season.

"There was more into it than that, and we'll leave it at that," Price said. "Quinn does a great job. I have no problems with effort. We had a difference of opinion and it got out of hand."

Lamb and reliever Keyvius Sampson needed 53 pitches to get through the inning as the Brewers sent 11 batters to the plate and piled up five hits, three walks and five runs for a 9-0 lead. Jimmy Nelson (6-7) faked a bunt and slapped a two-run single during the spurt.

The Brewers hadn't scored nine runs in a game since May 27, when they beat the Reds 9-5. Cincinnati's starting pitcher that game: Lamb.

Hernan Perez also hit a two-run homer off Lamb, who gave up nine runs and nine hits. He left after the first five Brewers reached in the third inning. The left-hander has lost his last three starts, giving up 20 runs in 11 1/3 innings.

Nelson gave up six hits and a pair of walks in seven shutout innings, emerging from his slump. He had been 0-4 with a 5.14 ERA in his last seven starts. Joey Votto had four of Cincinnati's nine hits.

"It felt good to be back to where I was early on," said Nelson, who has been working on pushing off harder with his legs during his delivery. "My pitches seemed to have better life on them."

Jonathan Villar had three of the Brewers' 12 hits. Each of the top seven batters in the order scored.