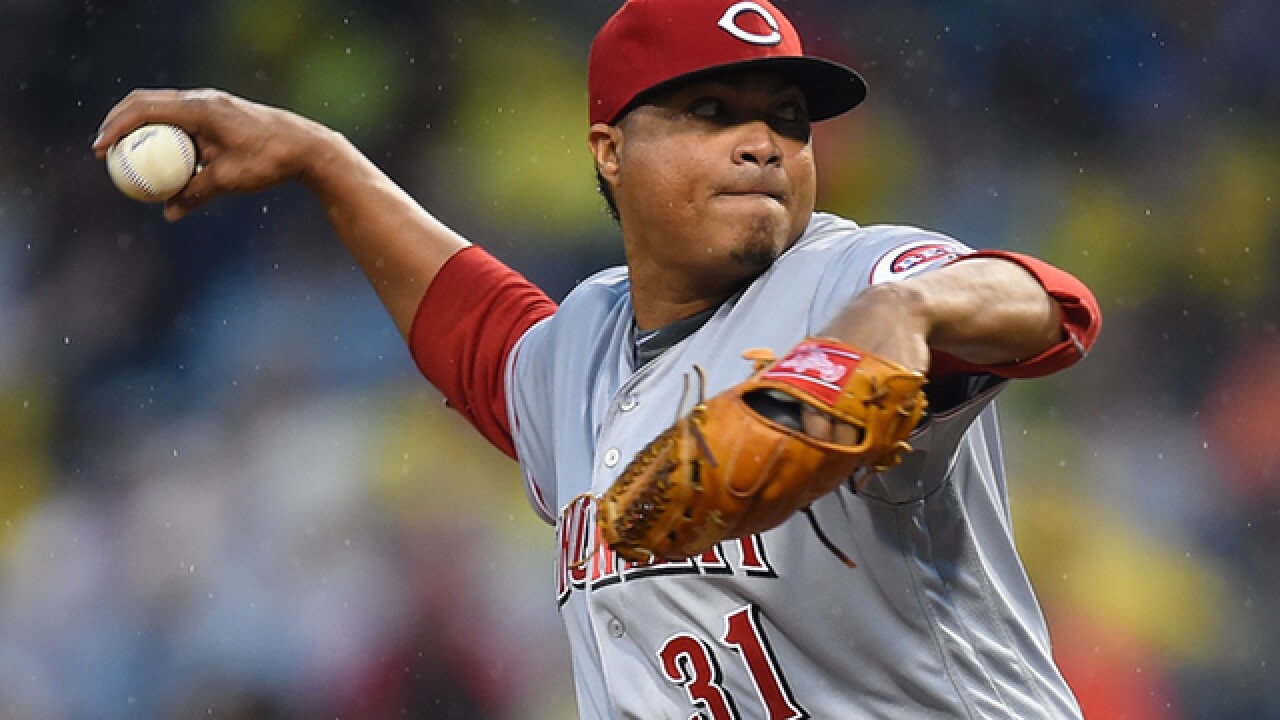 Joe Sargent
<p>PITTSBURGH, PA - APRIL 30: Alfredo Simon #31 of the Cincinnati Reds pitches during the second inning against the Pittsburgh Pirates on April 30, 2016 at PNC Park in Pittsburgh, Pennsylvania. (Photo by Joe Sargent/Getty Images)</p>

PITTSBURGH (AP) -- Francisco Liriano won for the first time since opening day and John Jaso homered to open the bottom of the first as Pittsburgh beat Cincinnati 5-1 Saturday night for the Pirates' sixth straight win and Reds their sixth consecutive loss.

Liriano (2-1) allowed one run in 6 2/3 innings for his first win since April 3 when he pitched six scoreless innings against St. Louis. The left-hander also held the Reds to five hits and struck out six while walking none after allowing 17 bases on balls in his first four starts.

Jaso hit the first pitch of the game from Alfredo Simon (0-3) out to right-center field for his first home run of the season. It was also his fifth career homer leading off the first.

Simon lowered his ERA to 13.50 from 16.39 by allowing three runs and six-plus innings. He walked four and struck out four.

Francisco Cervelli's RBI single in the fifth for the Pirates snapped a 1-1 tie and chased Simon. Josh Harrison added a sacrifice fly later in the inning.

Cervelli and David Freese each had two hits of the Pirates' 10 hits.

Sean Rodriguez hit a two-run homer, his fourth, in the eighth to make it 5-1 after entering the game in the top of the inning at first base as a defensive replacement for Jaso.

Mark Melancon got the last out for his seventh save, striking out Zack Cozart with runners on first and second.

Billy Hamilton had three hits for the Reds and scored their only run in the fifth, tying it at 1 when he came around from first base on Cozart's double. Cincinnati has scored just 10 runs during its losing streak.

RHP Raisel Iglesias may miss his scheduled start Sunday against the Pirates in the finale of the three-game series after feeling discomfort in his shoulder Friday during a throwing session. ... RHP Anthony DeSclafani (strained oblique) felt tightness in his side late in his rehab start Friday when he pitched five scoreless innings for Class A Dayton and will be evaluated by the team's medical staff. ... C Devin Mesoraco (sore left shoulder) missed his second straight game but could be in the lineup Sunday.

Major League Baseball medical director Gary Green held an hour-long meeting with the Pirates prior to the game. Players from both the Pirates and Miami Marlins have expressed concerns about playing their scheduled two-game series in San Juan, Puerto Rico, from May 30-31 over fears of contracting the Zika virus.

According to the Center for Disease Control, Zika can cause a birth defect called microcephaly, which causes infants to be born with very small heads and underdeveloped brains. The virus is spread by mosquito bites and sexual intercourse and those infected might not show symptoms, which can heighten the risk of spreading the infection.

PLAY OF THE DAY

Reds second baseman Brandon Phillips made an outstanding play to retire Jaso in the sixth inning. He charged a slow roller and made a behind-the-back throw to first baseman Joey Votto.

If Iglesias (1-1, 3.49) is unable to pitch, RHP Tim Adleman is expected to be called up from Triple-A Louisville and make his major league debut.