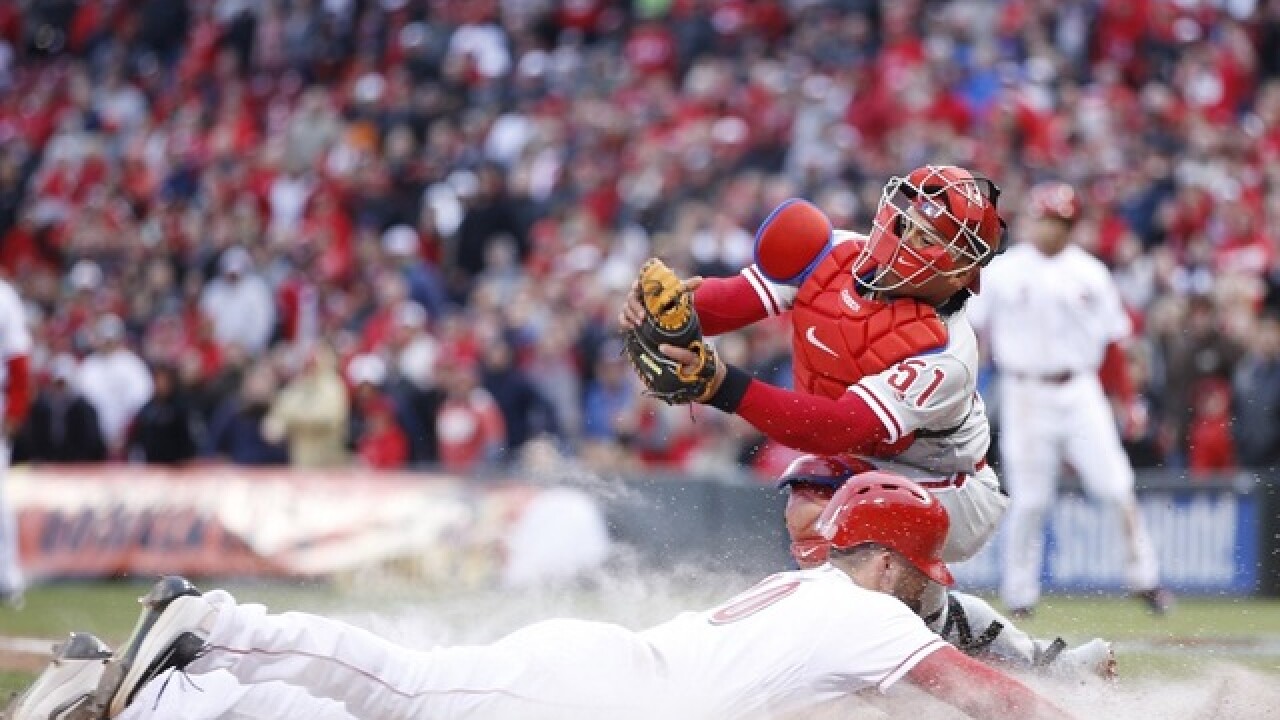 Joe Robbins/Getty Images
<p>CINCINNATI, OH - APRIL 4: Tyler Holt #40 of the Cincinnati Reds slides home with the tying run ahead of the throw to Carlos Ruiz #51 of the Philadelphia Phillies after a sacrifice fly by Zack Cozart in the eighth inning of the opening day game at Great American Ball Park on April 4, 2016 in Cincinnati, Ohio. The Reds defeated the Phillies 6-2.</p> 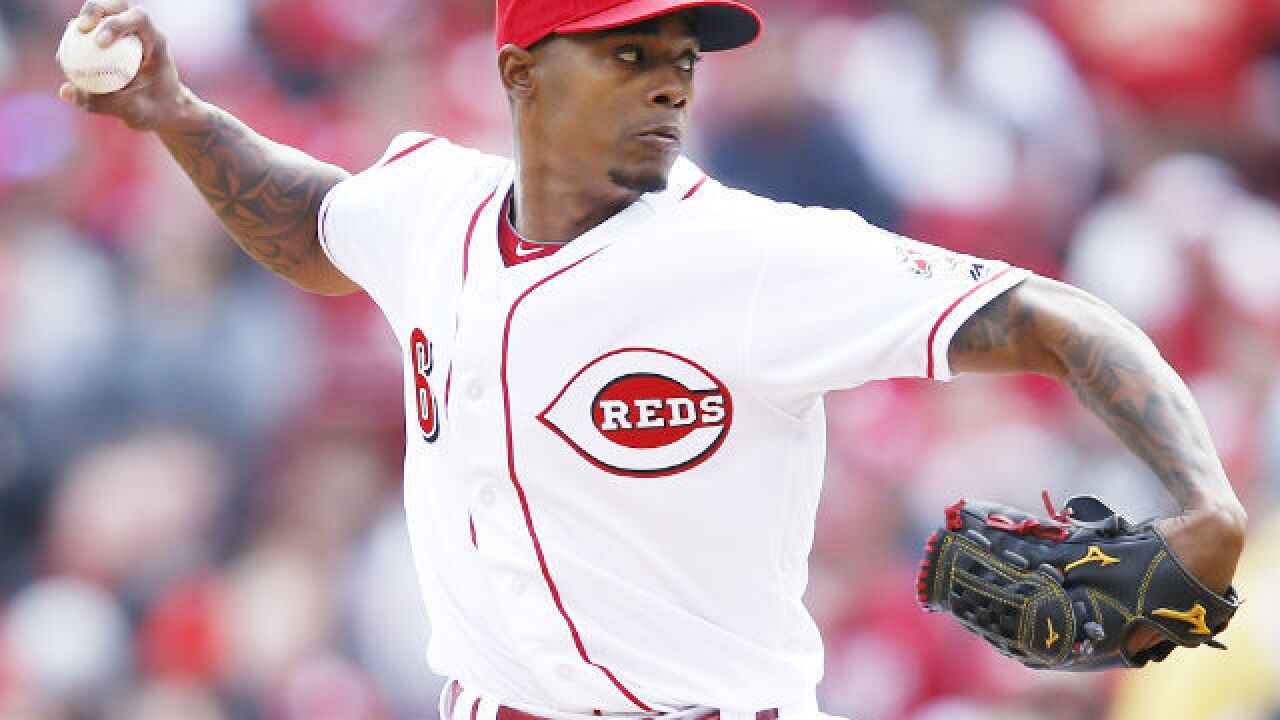 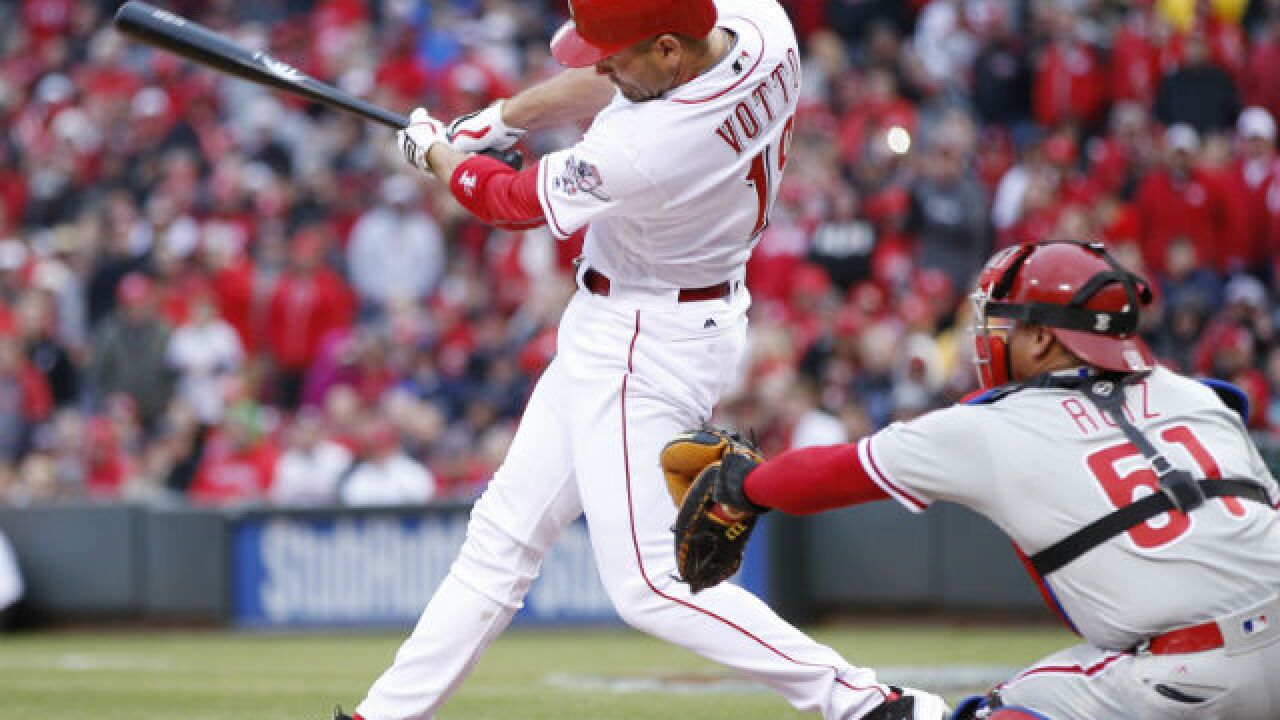 CINCINNATI -- Joey Votto looked like he couldn’t hit with a tennis racquet in his first three at-bats on Opening Day.

On his fourth, he won the game.

Votto’s two-run single in the eighth keyed a five-run rally that lifted the Reds to a 6-2 victory over the Philadelphia Phillies before a regular-season record crowd of 43,683 at Great American Ball Park on Monday.

Votto was able to put the bad at-bats behind him and get a hit off a pitcher, James Russell, he'd struggled against.

“That’s why they pay me the big bucks,” Votto said. “I have an obligation. That’s something I pride myself in — not taking at-bats to at-bats. I try to think of the season as one big at-bat. I’m trying to get better every single at-bat. The fact that I struggled the first three at-bats ... I learned from those and took it into that at-bat.”

How difficult is that to do?

“I’m human. I’m going to have my moments. You’ve got to train yourself to have a robotic side and just move on from things immediately.”

GALLERY: See all the action inside GABP

The Reds only had three hits — all from Zack Cozart — entering the eighth and hadn’t threatened since the first inning.

But after David Hernandez walked Adam Duvall, pinch-hitter Scott Schebler bounced one over first baseman Darin Ruf’s head for a double. It was Schebler’s first at-bat as a Red.

The Phillies brought in left-hander James Russell to face Cozart, who lofted one to right. It looked too shallow to score pinch-runner Tyler Holt, but new third base coach Billy Hatcher sent him. He made it with a headfirst slide. Schebler and Hamilton moved up.

Eugenio Suarez then walked to reload the bases. Votto had struck out in his first three at-bats and looked bad on the last two. The third strikeout was especially tough. It came with the tying run at third and two outs in the sixth.

This time, Votto lined one into left-center to give the Reds a 4-2 lead. The Reds added two more runs on Jay Bruce’s RBI single.

WATCH diving catches by Billy Hamilton and Tyson Holt in the ninth.

Votto was AWOL during introductions.

“I did the LeBron,” he said, referring to his spring training antics. “I did the Ronaldo. So I figured Opening Day I’d do the no-show.”

“I still haven't solved that caper,” Price said. “I don't know. I imagine they got to the point where he was going to feel a little uncomfortable jogging out there three minutes after he was introduced. I don't know where he was. Once I had visual contact with him, I said, 'OK he's here.' I knew he was at the ballpark, I just didn't know exactly where he was when we were all standing on the line.”

Votto, of course, was there where the Reds needed it most.

“He’s showing up when it counts the most for a long time,” Bruce said.