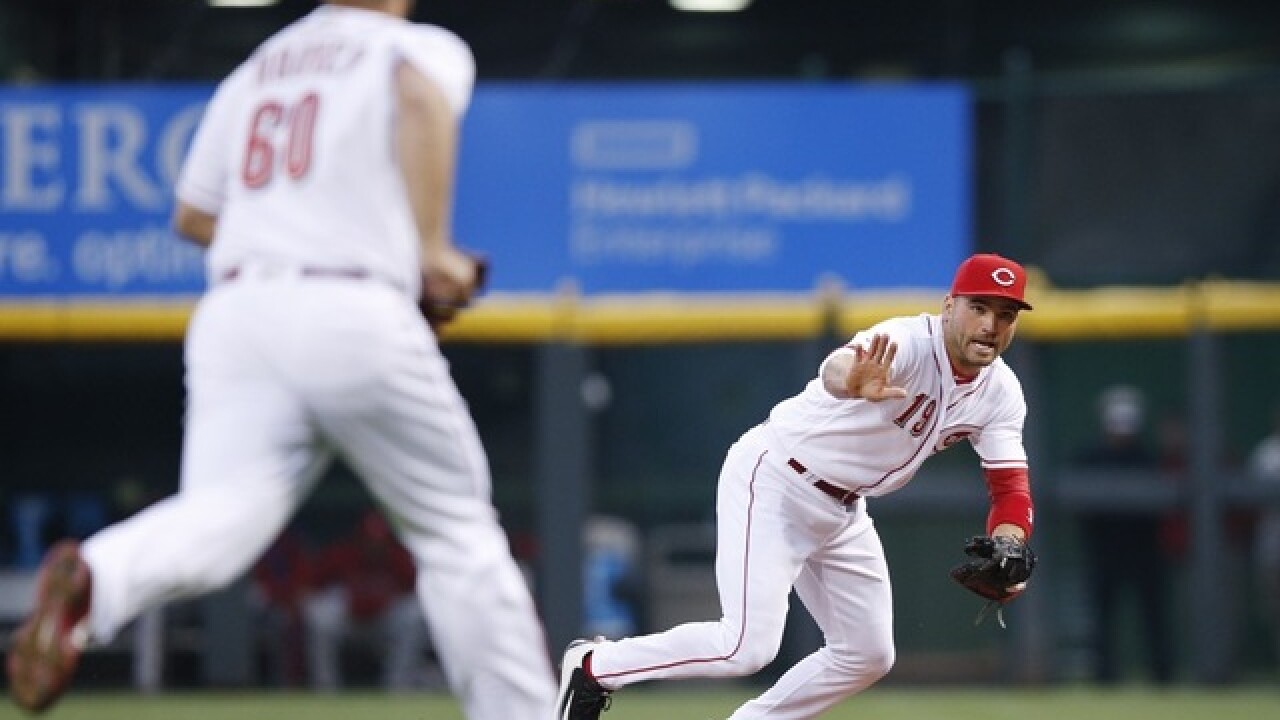 Joe Robbins/Getty Images
<p>CINCINNATI, OH - APRIL 4: Joey Votto #19 of the Cincinnati Reds waves off J.J. Hoover #60 after fielding the ball for the final out in the ninth inning of the opening day game against the Philadelphia Phillies at Great American Ball Park on April 4, 2016 in Cincinnati, Ohio. The Reds defeated the Phillies 6-2.</p>

CINCINNATI — Joey Votto chose to dwell on one statistic.

Votto was referring to the Reds record. Votto’s record so far this year is not so good. He went into Thursday night’s game with the Chicago Cubs hitting .188 with a .270 on-base percentage and a .255 slugging percentage.

He went into Thursday hitless in his last 16 at-bats with six strikeouts, including three on Wednesday.

“I haven’t played particularly well,” he said. “As long as the team plays well and I’m part of wins and everybody’s contributing, that’s the priority.”

“I’ve talked to Joey,” Price said. “Jay (Bruce’s) wife is pregnant, so he could be gone at any time. I’ve talked to Joey. He wants to see the pitches and get the at-bats. If I feel like it’s going to benefit him to take the day off, then I would do it for sure, just take the initiative.

“Right now, he likes playing and wants to figure things out like any competitive guy would.”

Votto lined two balls into the shift Wednesday, but he would not bite on the hard-luck excuse.

“No,” Votto said. “That’s not bad luck. That’s just me hitting the ball at people. I’m supposed to hit balls where nobody is. That’s me working on my swing. I’m not there yet. But I’m working daily.

“Rome wasn’t built in a day. My swing’s a fine piece of machinery. Everybody wants to rush the Ferrari, but it comes out every four to six years. It takes time.”

Votto was out early Thursday working with hitting coach Don Long. Price made a special appearance to throw to Votto, although that had more to do with Price being left-handed for the flip drill.

It wasn’t a new drill per se.

“I’m just trying to tighten up my swing,” Votto said. “Make sure that  I get to a place that I make it repeatable and I can help this team win and carry this wining record to hopefully playoff berth and surprise people and win the World Series.

“That’s all we care about here.”