Fay: Jay Bruce days were great while they lasted 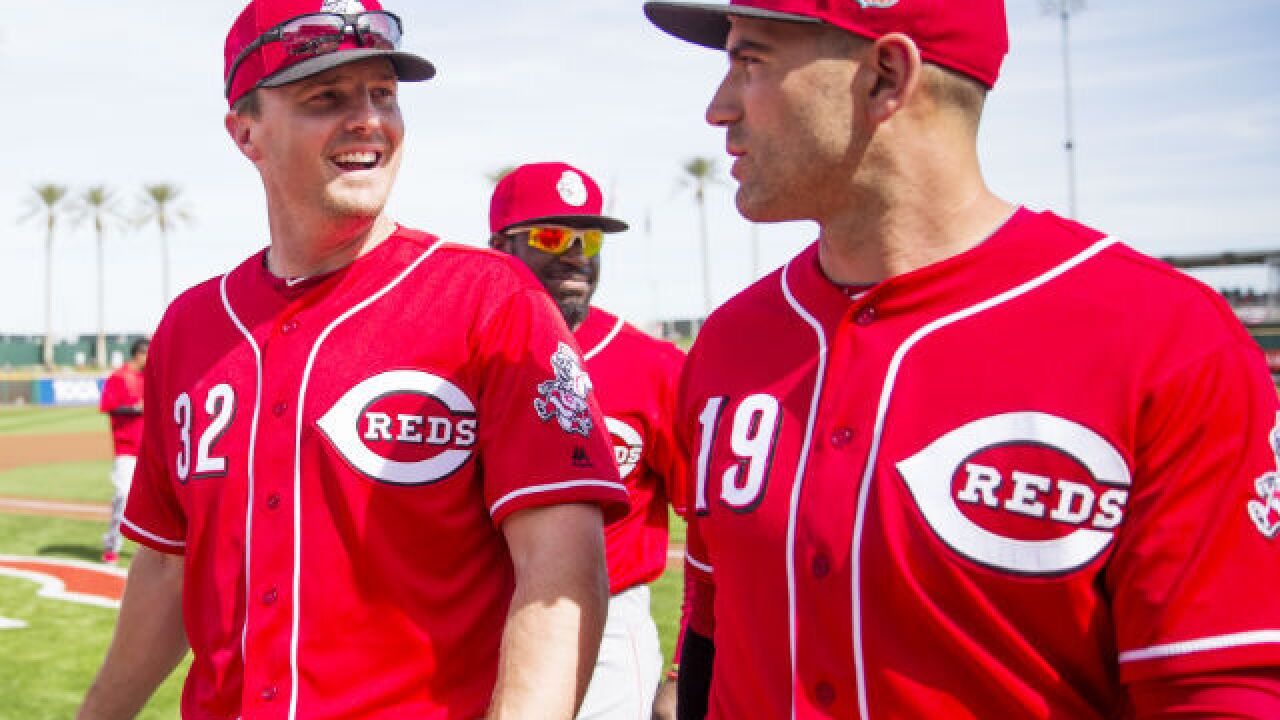 <p>GOODYEAR, AZ - Jay Bruce #32 and Joey Votto #19 of the Cincinnati Reds look on before a spring training game against the Cleveland Indians at Goodyear Ballpark on March 1, 2016. (Photo by Rob Tringali/Getty Images)</p><p> </p>

CINCINNATI - It was one of my last days at spring training in Goodyear. I figured it might be the last time I’d have a chance to talk Jay Bruce while he is still a Red.

Bruce, of course, has been the subject of trade rumors since the deadline last season. He was nearly traded to the New York Mets then. He was traded to the Toronto Blue Jays on the day after he reported to spring training. That trade was nixed when one of the prospects coming to the Reds had a medical issue.

It seems like only a matter of time before Bruce is moved.

Bruce has always said he wants to be a Red for life. So I asked him if he’s disappointed that it seems highly unlikely that that will happen.

Bruce would have none of the talk that his days as a Red are numbered.

“I don’t think that’s fair to say,” he said. “I don’t know what’s going to happen. I’m on the Reds until I’m not. I try not to speculate past that. If something does happen, we’ll address it then. Until I get traded, I’m a Red. I’m happy to be here, excited to get the year going.

And that’s the attitude Bruce ought to take.

Several factors led to where the Reds are with Bruce.

Factor 1: After a good four-year run, things went bad for the Reds the last two years.

Factor 2: Rather than try to tweak things on the fly, the Reds went for the full rebuild.

Factor 3: When you go for the full rebuild, you trade anyone who’s not signed on the other side of the rebuild and is making big money.

Bruce turns 29 the day before Opening Day. I think if he had  hit the last two years like he did in 2012 and 2013, the Reds might have signed long-term — or be willing to sign him long-term. He is, after all, still in his prime years.

In this short attention span world, people tend to forget how good Bruce was. He won the Silver Slugger as the best hitting right fielder in the National League in ’12 and ’13. He finished 10th in the NL MVP vote each of those years.

On top of that, Bruce is the kind of player Bob Castellini likes. Bruce has never been in trouble. He plays hard. He says the right things. His teammates love him.

But Bruce will be the first to tell you his performance at the plate the last two years stinks.

Whether Bruce can be a top 10 player again remains to be seen. I talked to scouts about what led to Bruce’s struggles and a couple of them thought he was holding his back elbow too high. Bruce told Zach Buchanan of The Enquirer that he has lowered his hands.

That may work. My take on Bruce is when he gets more selective, i.e., walks more, he hits better.

That’s why I’ve maintained it makes sense to wait to trade Bruce. His value can only rise. Bruce is under contract at $12 million this year with a club option for $12.5 million next year. That’s small change in baseball for a good-hitting right fielder. Jason Heyward will make $24 million next year.

Bruce is true power hitter in an era where power is in short supply. He has hit more home runs than any right fielder in baseball over the last eight years. He’s 10th in the majors in home runs and tied for eighth in RBI overall over the last five years.

Meanwhile, Bruce will carry on as a Red. He says he feels no different this spring.

“It would be different if I wasn’t here,” he said. “I feel at home here like I always have. I feel very good health-wise. I feel great. I don’t speculate on future plans until they happen. You try to help this team win. I try to get back to the player I was before 2014."