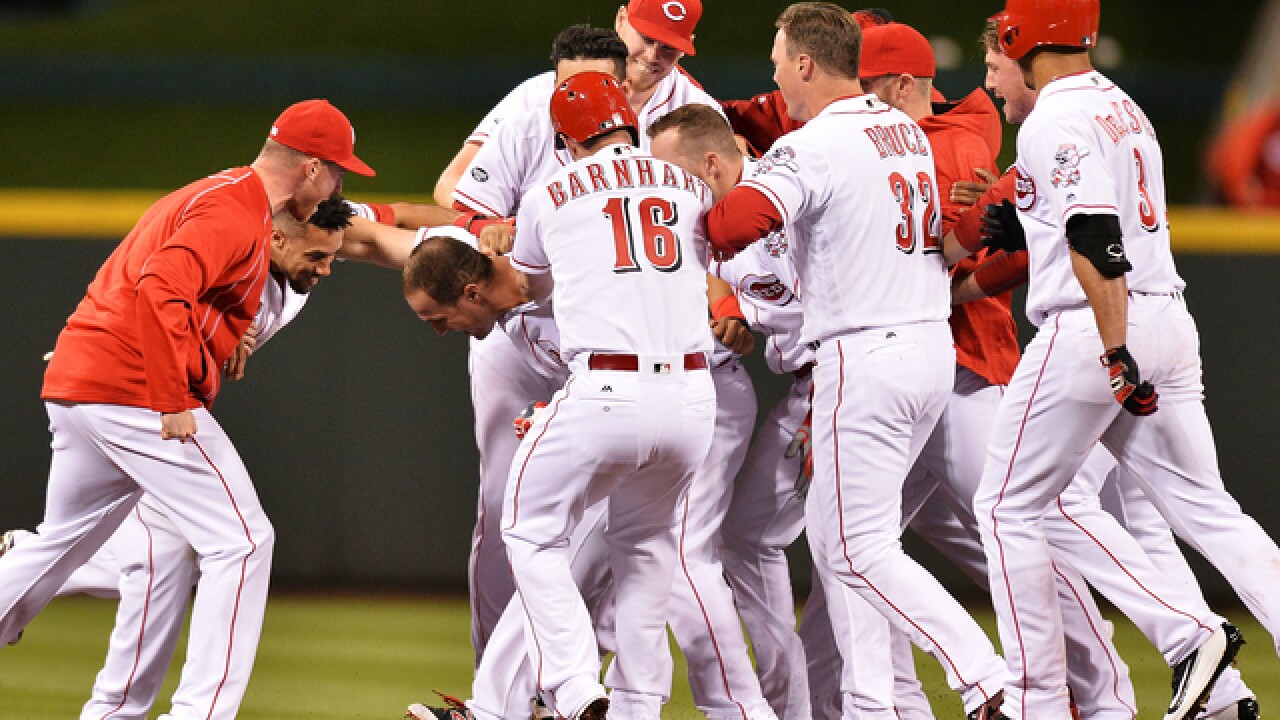 CINCINNATI — For the Reds to be any good this season, their young players are going to have to play well and build a little confidence early.

Scott Schebler’s did that Wednesday.

Schebler’s bolt to left center for a two-run double lifted the Reds to a 3-2,  walk-off victory over the Philadelphia Phillies on Opening Night. The Reds won with a five-run eighth on Opening Day.

Two wins, two tons of drama. They may have come against the Phillies — one of the few teams picked below the Reds by the experts — but, again, for this Reds team to be competitive, it’s going to have get some of these young players believing they can be successful. Night’s like Wednesday help.

“I think they believe we can come back,” Reds manager Bryan Price said. “We were slow to get started in the opener and tonight in the second game of the series.

“But I think the guys feel we have the ability. It’s not going to be like this all year. We’ve got a nice offensive ball club. But in games like this, I don’t feel like anyone in our lineup feels like we’re going to be behind even with tough setup guys and closers.

Eugenio Suarez, who homered in the first, started the rally in the ninth with a single. Joey Votto gave one a ride, but it died in the wind in left-center. Devin Mesoraco hit a slower roll up the third-base line that he beat out for a hit.

Jay Bruce followed with a single, but Suarez was held at third.

Schebler, obtained in the Todd Frazier trade, went down swinging in his first three at-bats. Dalier Hinojosa quickly got two strikes on him.

Schebler hit it to the wall in left-center with authority.

“He drove that ball in a tough environment to hit,” Price said. "The ball wasn’t carrying well today. Joey hit the ball well earlier in the inning and it didn’t go anywhere. Scott cut that ball through the wind.”

“I struggled those first couple of at-bats,” Schebler said. “I just couldn't figure it out. I finally made an adjustment. Jay was telling me, ‘Hey, you don't gotta hit it 500 feet, just put the bat on the ball.' That really helped. Him talking to me, talking me down, he said, ‘Hey, it's going to come down to you in this game. I promise you. That’s just how this game works. You struggle in this game, and it ends up coming down to you.' And he was telling me the whole game, and it certainly did. And it came down to me.”

Schebler was rewarded with with a Gatorade bath.

“Man, I’m extremely happy,” Schebler said. “We grinded one out today. That was really big.”

The pitching put the Reds in a position to win again. Left-hander Brandon Finnegan went seven innings and allowed two runs on three hits. He walked one and struck out nine.

“He did a really good job,” Price said. “It looked like the way (Aaron) Nola was throwing the ball there weren’t going to be any add-on runs. He did a nice job to give us six quality innings.”

The bullpen — Caleb Cotham and Blake Wood — put up three zeros. The bullpen was a huge question coming to the season, especially after nearly everyone got hit around in the spring, but so far, so good.

“It helps guys build confidence,” Price said. “A lot of these guys are pitching the big leagues for the first time.”