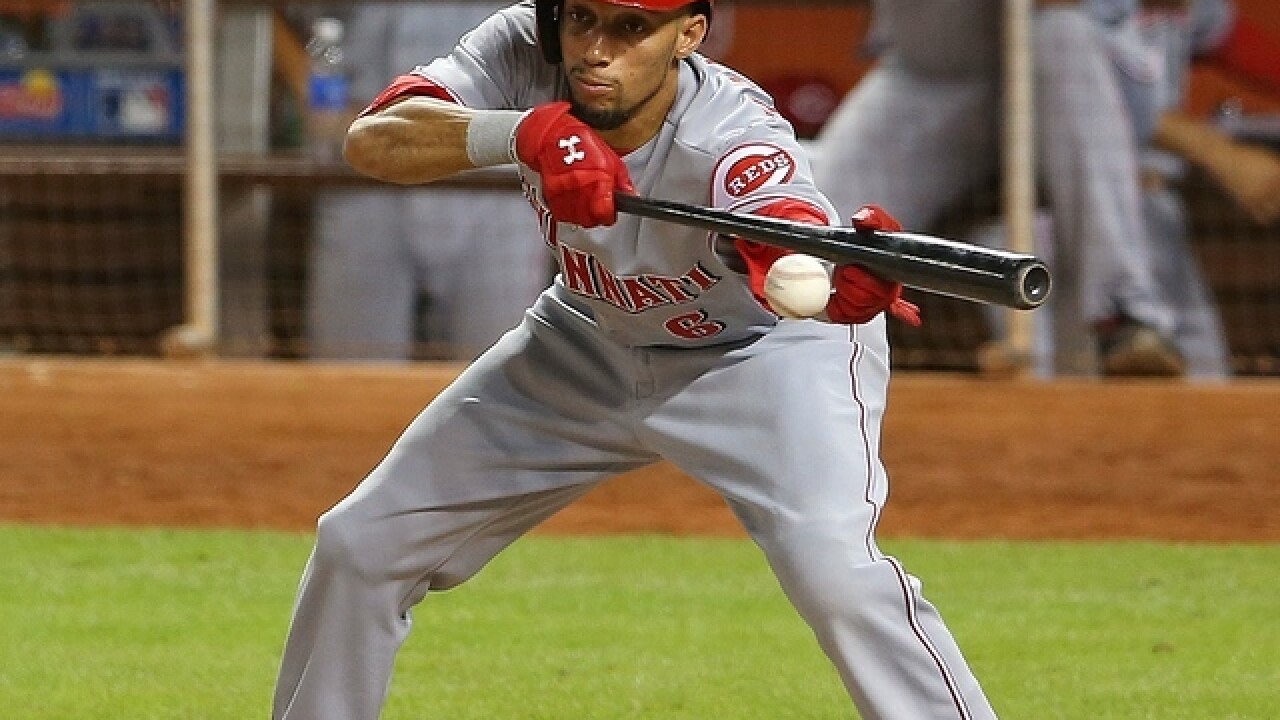 WCPO-file photo
<p>Billy Hamilton, shown here in 2014, <a href="http://www.wcpo.com/sports/baseball/reds/reds-billy-hamilton-finishes-second-for-national-league-rookie-of-the-year" target="_blank">impressed many that year as a rookie</a>. The Reds hope he can return to that form this year. WCPO file photo.</p>

CINCINNATI — Billy Hamilton would like to return to leading off.

But he figures he’s in the second-best spot right now — second in the order, oddly enough. Reds manager Bryan Price moved him up to hit behind leadoff man Zack Cozart.

“I wanted to get a chance,” Hamilton said. “I can bunt without worrying about it being a hit. If Cozart hits a double, I can get him over. I always wanted to do this. Of course, I still like the one hole. But this is good.”

Hamilton was hitting .296 over his last nine games going into Thursday, but the move up had something to do with moving Eugenio Suarez to sixth.

“In order for this to work, he has to swing the bat well and get on base.”

Hamilton has hit leadoff six times this year (when Cozart was out of the line) and ninth 13 times. Thursday was the second time in the second spot. Price didn’t consider putting Hamilton first.

“I love what Zack is doing,” Price said. “There are certain things you don’t want to mess with. With Billy hitting first, Zack’s in position where he has to take more pitches. He can go up now and zone a pitch. He’s taking advantage of pitches early in the count.”

Hamilton says some eavesdropping has helped his bat come around.

“I’ve been working with Joey (Votto) for these last few weeks. He’s been talking — not to me — but talking to (hitting coach) Don Long,” Hamilton said. “I’ve been listening to it and seeing things he’s working on.

“It’s been coming along good for me. If I continue to hit and stay healthy, it should be fine.”

Hamilton has only attempted five bunts for hits. He’s been successful on one. He said he’ll bring back his bunting game as his bat comes around.

Right now, the defense is taking away the bunt.

“The other day, Denard Span was leading off the Giants, (Reds third baseman) Suarez was playing even with the bag,” Hamilton said. “I said, ‘Why can’t they play me like that?’ They’re playing me halfway in. You’re just bunting into out with them there.”

Hamilton knows a few hits will back them up.

“Once I start hitting, my bunts will come,” Hamilton said.