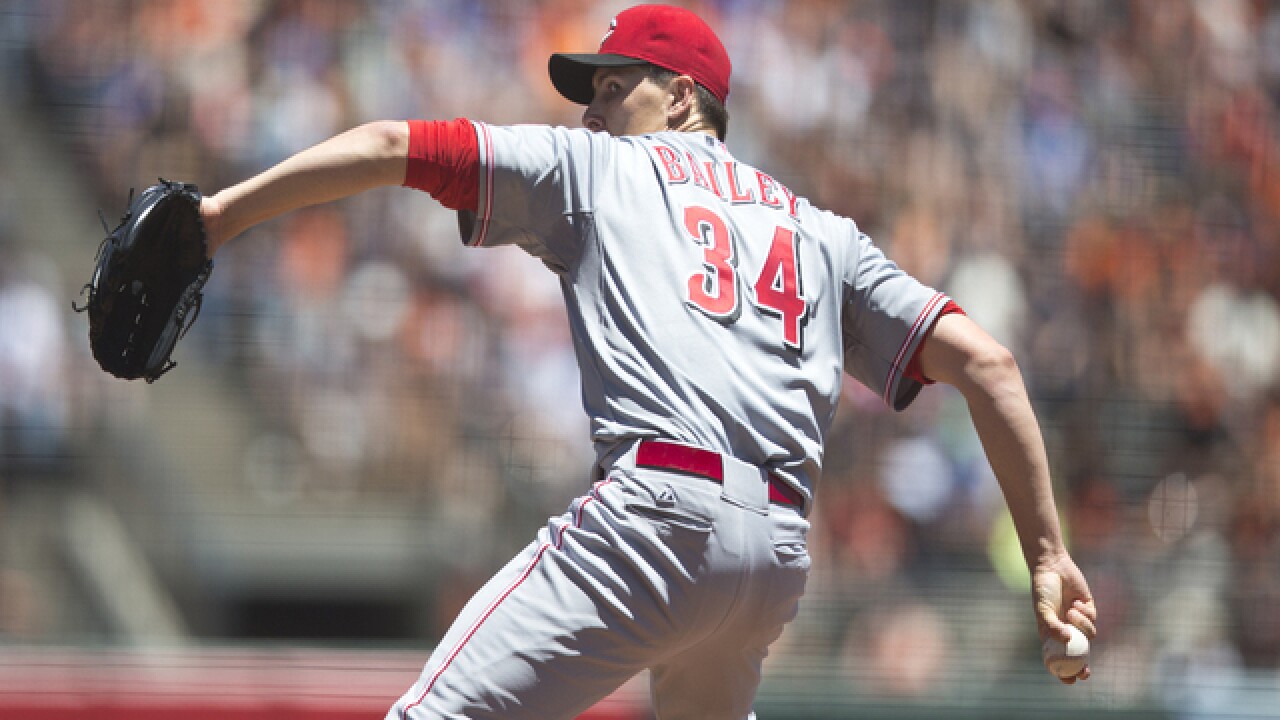 CINCINNATI — Homer Bailey’s return is going to be delayed.

How long is hard to say, but Bailey said it will be early June at the earliest to begin a rehab assignment.

Bailey feels fine after having a setback in his recovery from Tommy John surgery. But he took 10 days off throwing.

“Anyone who throws a lot knows that's a long damn time not to throw,” he said. “We're almost having to build pretty significantly all the way up.”

The time off is reason for the delay.

“I don't see a rehab assignment starting for at least a month, maybe a month,” he said. “It could be early June. I don't see it happening anytime soon, not because I feel anything, but more because I have to build all the way back up. That may come back quicker, it may come up later.

Bailey’s setback occurred on April 30 in his third rehab start. It was inflammation. He said a second opinion confirmed the original diagnosis. He has resumed throwing.

“I've got a pretty good feel as to how things react,” he said. “I haven't thrown today. I kind of wanted to, but I threw (Tuesday) without anything. We were 110, 120 feet out and everything was nice and clean. I wanted to get out today just to see how it responded.

“I feel great but they said to wait a little bit.”

Bailey said he isn’t concerned because of setback.

“I think they said it's more uncommon that I didn't have one as opposed to having one,” Bailey said. “We’re a little over a year out and that's pretty quick to come back. We're going to take our time and do this thing right. It's kind of the same thing I've said all along. You don't want to do it again, obviously. One of the things that was brought to my attention was there's a lot of research about guys who come back at the 12-month mark have a higher probability of it happening again, as opposed to maybe 14 months then the numbers are pretty skewed.”

Bailey was going to meet with Dr. Tim Kremchek to formulate a new plan.

The Reds have dealt with injuries to the starting pitchers all season. Anthony DeSclafani is still trying to come back from a strained oblique suffered in spring training. He’s throwing, but not off the mound.

“We’ve had some bad injury mojo,” he said. “We’ve got to push through it.”

Left-hander John Lamb had to leave his last start with a strained left thumb. He threw Wednesday but still can’t throw his curveball. He’s scheduled to start Monday in Cleveland. He’s thinks he can do that.

“I sure hope so,” he said. “Moving forward, it's better and better each day. I'm not extremely happy with the fact that I can't spin the curveball right now, but again, that's just pick my battles. I’m happy I could throw and get the arm moving. I certainly don't hope to miss much moving forward, if any.”