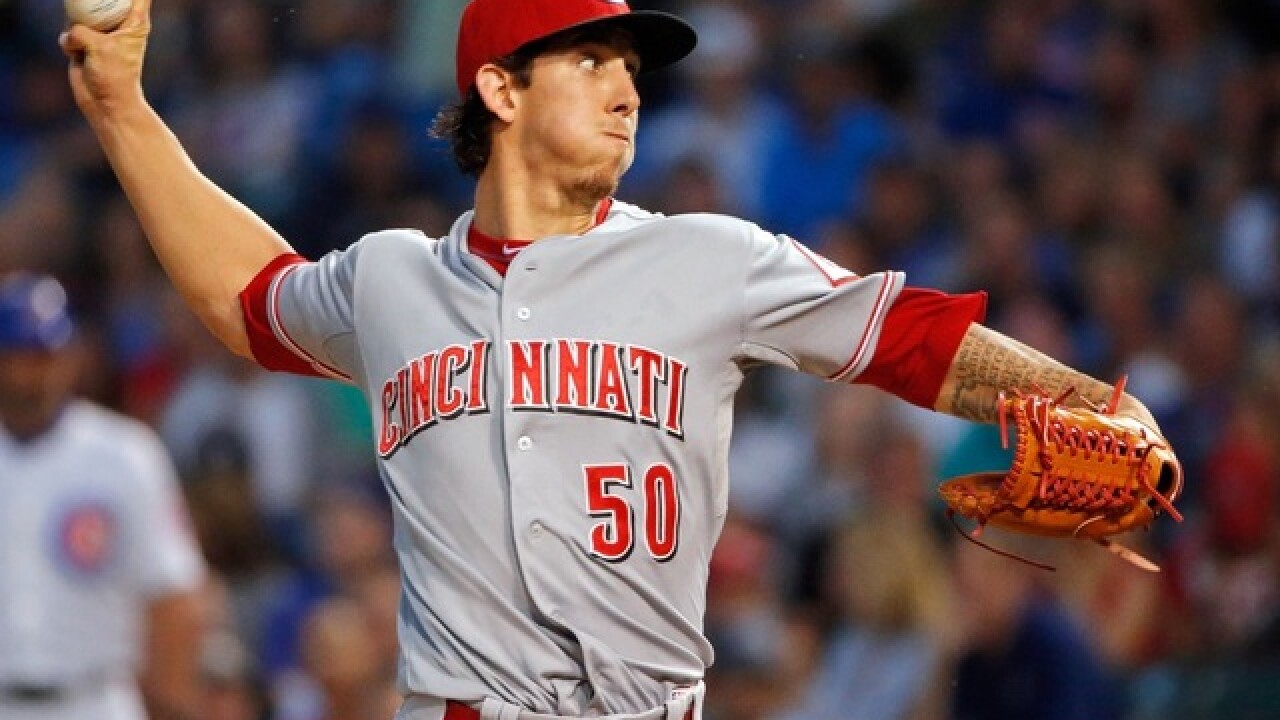 Image copyright 2017 Getty Images. All rights reserved. This material may not be published, broadcast, rewritten, or redistributed.
Jon Durr/Getty Images
<p>CHICAGO, IL - AUGUST 31: Michael Lorenzen #50 of the Cincinnati Reds pitches against the Chicago Cubs during the first inning at Wrigley Field on August 31, 2015 in Chicago, Illinois.</p>

CINCINNATI — Michael Lorenzen has had a rough spring physically. First, his elbow acted up. Then, he had bout with a nasty case of mono.

But one thing is certain: Lorenzen’s confidence was not shaken.

For now, Lorenzen is a reliever. Lorenzen rejoined the Reds in Cincinnati Friday. Next step on his return is a rehab assignment. He thinks he’ll be ready to go after three outings or so with Triple-A Louisville.

A relief role is fine by him.

“I just prepare myself to come here and say: What do you need me to do?” Lorenzen said. “They could ask me to play center field again and I’ll be ready and do it with a smile. They want me in the bullpen, I’m going to come out of bullpen and do the best I can. From the shoulders up, I’m ready. That’s the most important thing. Mentally, I’ve learned a lot about myself. I’ve learned how to discipline my mind, my thoughts. That was what Arizona was about.”

It sounded like Lorenzen’s arm is ready as well.

“I’m throwing really good,” he said. “My first outing was in (Marydale, Arizona at Milwaukee’s complex). I was 97, 98. The velo, the arm strength is there. The secondary stuff is there. I feel great. It’s coming out great.”

Lorenzen, 24, started 21 games for the Reds last year. He showed flashes of greatness. But he was 4-9 with a 5.40 ERA overall. Part of the reason he’s going to bullpen is need. Another part of the reason is he can come back more quickly.

Lorenzen says he does not prefer starting over relieving. He was a center fielder/closer in college at Cal State-Fullerton.

For the time being, Lorenzen is just happy to be out of the Arizona heat — Cincinnati weather was like a cold front to him — and back with his teammates.

“I’m extremely excited to be back,” Lorenzen said. “Being in Arizona that long going through obstacle after obstacle, getting through it, I visualized this day multiple times, just about everyday I was out there. It feels great to be back.”

It was quite the ordeal. Lorenzen was shut down in March 14 with a strained ulnar collateral ligament. He came down with mono in early April and lost 20 pounds. He had to restart his throwing program from scratch.

“It’s been difficult,” he said. “No wants to rehab. The Reds pay to play not rehab. That’s been difficult. But it’s been an amazing learning experience going through it. It’s not all sunshine and rainbows all the time. When you learn the most about yourself, it’s going to be sunshine and rainbows. It’s going to be going through obstacles and trials.

“I’ve learned a lot about myself on a mental note as a Christian man. And just maturing and learning more about my body as I’m rehabbing. I’m essentially new to pitching. Learning all this stuff is going to help. I won’t have to deal with this again.”

The mono was as tough to overcome as the elbow.

“The mono was tough. Losing the weight, having no energy. Thankfully, with the staff in Arizona, Timmy the chef, he had meals prepped that I was able to take home. I was able to put the weight back on. It was a team effort to get me back out here.”