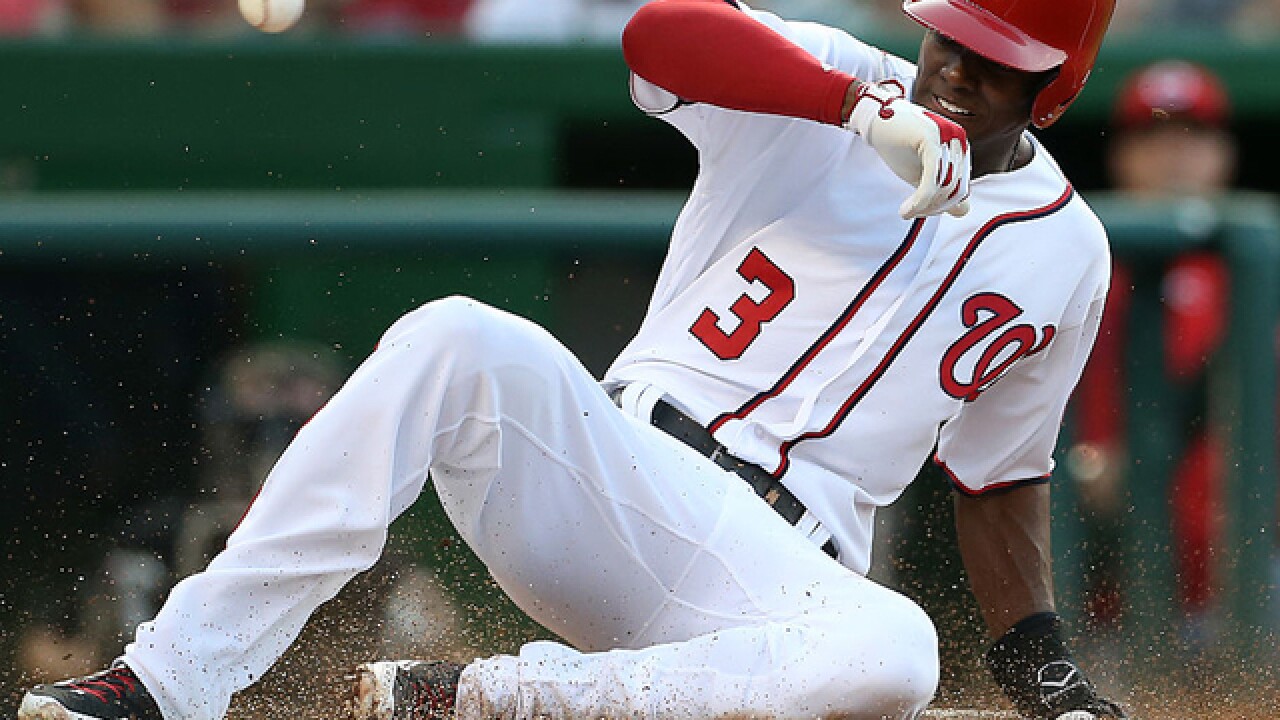 So, after the Nationals' shortstop hit a grand slam and a three-run homer in a 13-4 rout of Cincinnati on Thursday night, manager Dusty Baker offered some perspective on the performance.

"That's quite a night," Baker said. "That's a week and month for some guys."

Espinosa's second career slam put Washington up 8-1 in the third inning, and his next drive made it 13-1 in the fourth. Espinosa ranks second on the team with 15 homers despite usually batting eighth.

The switch-hitter connected off Brandon Finnegan (3-7) batting right-handed, then went deep from the left side against Josh Smith. He is the first Nationals player ever to homer from both sides of the plate, according to the Elias Sports Bureau.

As his second home run cleared the fence in center field, Espinosa recalled, "I was just happy. I had never done that in the big leagues, hitting a home run from both sides."

Espinosa's previous career high for RBIs was six, and his only other grand slam came in his fifth major league game on Sept. 6, 2010.

It was a rocky April for Espinosa - as evidenced by those eight RBIs - and May was only slightly better. June, however, was a different story.

"He's persevered," Baker said. "I'm happy for him. Now, he just needs to keep it going."

Gio Gonzalez (4-7) gave up four runs and struck out nine over six innings for the NL East-leading Nationals, whose current winning streak comes on the heels of a seven-game skid. Gonzalez was 0-6 with an 8.44 ERA in his previous seven starts.

Ryan Zimmerman got the rout started with a three-run homer in the first inning against the lowly Reds, who have lost eight of nine.

Joey Votto homered for Cincinnati, which has yielded 40 runs in its last four games - all of them defeats.

"You all saw the game. Not much to say about it," Finnegan said. "It was definitely my worst outing of the year - of my life, honestly. Just have to get ready for my next start."

He had never given up more runs, or gotten fewer outs as a starter.

The lesson learned? It wasn't as much about the home runs as the five walks.

Washington tied a season high for runs in a game without receiving a contribution from reigning NL MVP Bryce Harper, who was given the night off by Baker.

"His legs are a little tired," Baker said, noting that Harper twisted his ankle earlier in the week. "He's been playing through things the last couple days."

Reds: It was the second time in seven games that Cincinnati lost by nine runs. The Reds have allowed at least 13 runs eight times this season.

Nationals: During its five-game winning streak, Washington has outscored the opposition 36-12.

Reds: RHP Caleb Cotham (right shoulder inflammation) was scheduled to begin a rehab assignment Thursday night at Class-AA Pensacola against Chattanooga. Manager Bryan Price said the plan is to have Cotham pitch around five times in the minors, "and then we'll reassess." Cotham has been on the DL since May 31. ... OF Billy Hamilton passed concussion protocol and was in the starting lineup after being struck in the face by a deflected line drive Wednesday.

Nationals: RHP Stephen Strasburg (back, ribs) is eligible to return from the DL on Friday, but that almost certainly will not happen. "I'm more inclined not to rush him," Baker said.