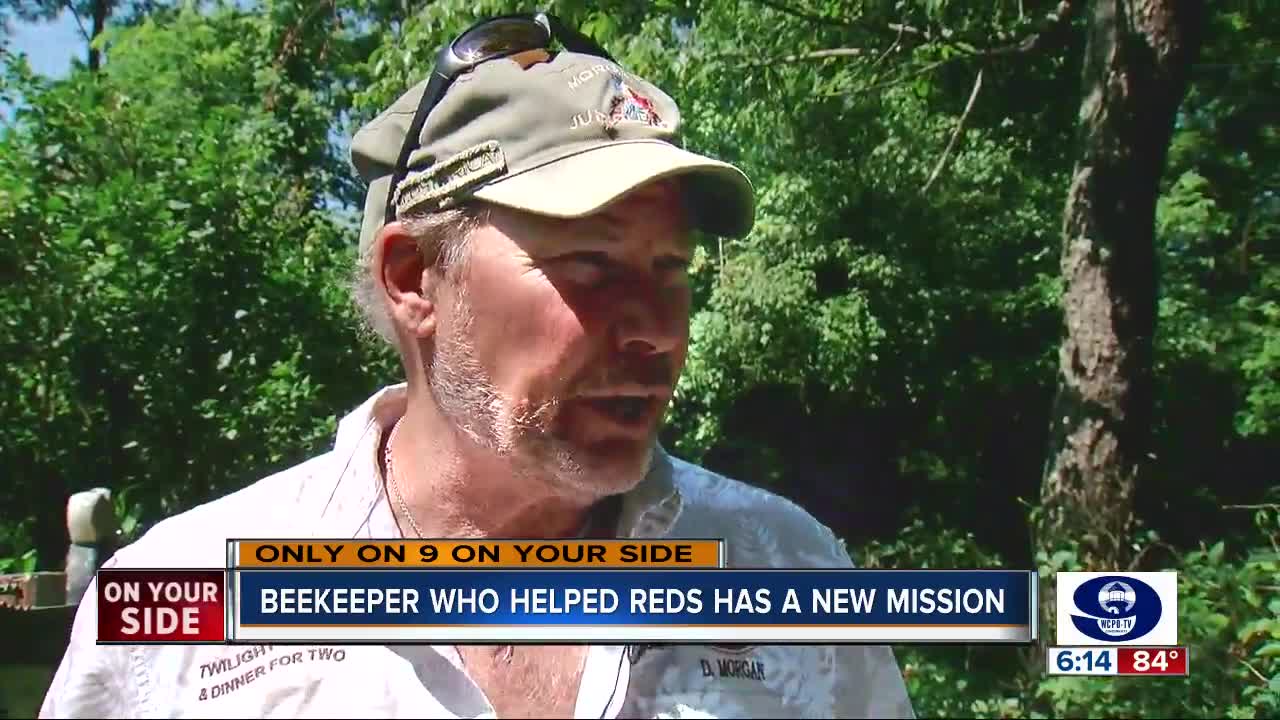 Don't bee scared, honey! Humans need these little pollinators, and Dirk Morgan wants to give you a hands-on opportunity to learn about them.

It's a story just begging for puns.

He's a fascinating guy who couldn't bee more anxious to help the Tri-State break out in hives.

Dirk Morgan saved the day when a swarm of 75,000 bees temporarily halted a Reds game at Great American Ball Park in May.

Now, he hopes to create a new buzz about his plans to make more people bee friendly. Or, rather, bee-friendly.

He and his wife, Lori, are offering a "Bee and Butterfly Experience" focused on familiarizing humans with the wonderful world of honeybees and other pollinators at their home and their nearby Airbnb in the Fort Ancient area.

"When people come out, we talk about the benefits of bees," Morgan said. "We let them taste the honey and my wife, Lori, will create some awesome lunches that they can taste raw honey as well as what it's like as an ingredient. Then we'll talk about different parts of the beehive, what's going on inside the beehive."

Those who don't want to get hands-on with the bees can watch how they work through a plexiglass wall he installed in his apiary.

But for those who want to give it a try?

"We'll put a suit on, we'll let them use a smoker, we give them a hive tool," Morgan said.

The Morgans tailor the roughly two-hour experience to the participants, taking into account whether they have interest in becoming beekeepers themselves or just want to know how to help increase the planet's dwindling, vital population of bees.

Bees play a role in about 70 percent of the world's food supply, said Morgan, who does routine inspections of his fifteen hives to protect them.

"I don’t really consider myself a beekeeper as much as a bee advocate," Morgan said. "Bees have been keeping themselves for millions of years, and they do well without us, too, but they do need our help now that we’re encroaching so much upon them."

The Morgans said the experience tens of thousands of fans had with bees at the Reds' ballpark inspired them to do more to help bees.

The couple happened to be in Reds owner Phil Castellini's suite when the swarm stopped the game. Morgan's knowledge — that a hive will follow its queen, and that you can corral a swarm by finding her — enabled him and another beekeeper at the game, Jonathan Beers, to box up the little insects and get them to a place they could thrive.

Some inside “buzz” here: Beers will be presenting a jar of honey made by that hive to Castellini in the coming week, and the Reds organization is planning a family day focusing on bee-related education for next June during Bee Pollinator Month.

“We’ve learned so much about bees and how important they are,” said Reds senior vice president of business operations Karen Forgus, who said she is working on demonstrations, a pre-game ceremony and maybe a kids' giveaway for the “bee-friendly” family day.

Morgan said the Reds organization did something big the day the bees swarmed the ballpark.

"They brought awareness to millions of people around the country, if not the world, about honeybees," Morgan said. "And more people know now that when they swarm they're really not aggressive. Not one person in the stadium was stung. And now they have a good home."

It was a perfect game for a guy who values preservation.

Morgan is one of the eponymous owners of Morgan's Canoes, which he co-owns with his brothers. They've all been dedicated to teaching people to preserve and protect the Little Miami River.

Right at the entrance at Morgan's Riverside Campground & Cabins, guests will see an old canoe re-purposed as a container garden. Morgan hopes this will inspire visitors to do something similar.

"Creating habitat is something that everybody can do," Morgan said. "And just a small 20x20 patch of perennial wildflowers in your backyard will not only help honey bees and native bees but all of the rest of the pollinators and monarchs as well."

Lori Morgan said growing up on a farm imbued her with a passion for the outdoors.

"And then when I met Dirk, it's like we have this whole platform to help educate people, and it's very rewarding," she said.

The couple would like to see the Little Miami Trail, which runs the length of the river, become a pathway of interconnected gardens that would serve as a hopscotch for pollinators. They said meetings are already underway with the Cincinnati Zoo, Pollination and Little Miami Conservancy to make it happen.

"My parents believed in a philosophy of preservation through utilization in that, in order to really protect and save a beautiful river like this, you needed to get people out to experience it and see what it’s like and get on the water," he added.

Morgan said he is applying that philosophy to their new bee experience, too.

"It transcends renting a canoe down a scenic river," Morgan said. "It's the whole experience and making people more aware of what we have here. Come out, enjoy the country, and unwind a little bit, and find out what the buzz is all about."

For more information about the experience, send an email to morgansnaturalbuzzhoney@gmail.com.