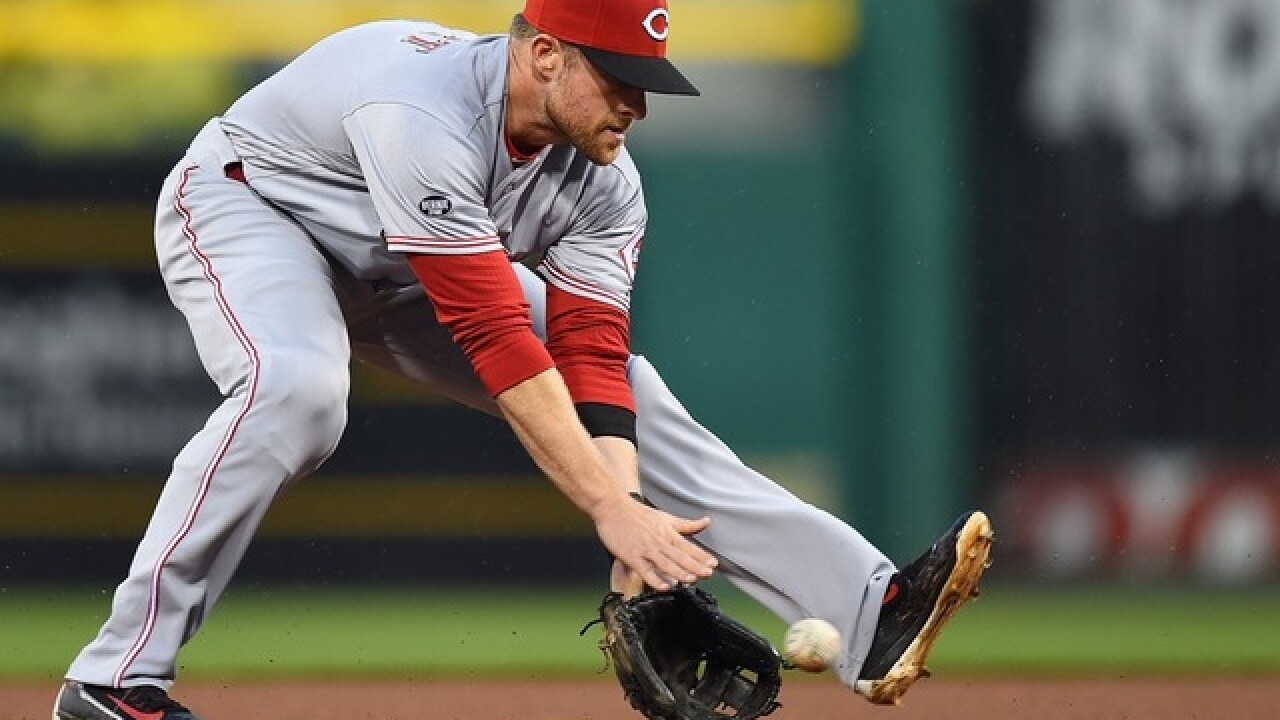 Joe Sargent/Getty Images
<p>Zack Cozart is a free agent after this season.</p>

The Reds are quickly entering the “if it weren’t for bad luck, we’d have no luck at all” category on the injury front.

“Unfortunately, I’m getting conditioned to this,” Price said. “That’s the problem. We’re dealing with a lot of injuries dating back to Ryan Ludwick Opening Day of 2013 separating his shoulder and missing the bulk of the season. Then certainly all of ’14 and a good portion of ’15, and now entering ’16.

“The health of our players — keeping them healthy — has been challenging.”

Devin Mesoraco (left shoulder) and Zack Cozart (right knee) were out of the lineup Monday night, with Mesoraco being placed on the disabled list for 15 days. Starters Homer Bailey and Anthony DeSclafani had setbacks in rehab starts. Jon Moscot is listed at Tuesday’s starter, but the Reds aren’t sure he’ll be able to start because his left shoulder (non-throwing) is sore. Adam Duvall was out of the lineup after banging his head in the Pittsburgh series. Raisel Iglesias (shoulder) went on the disabled list Sunday.

Price doesn’t blame the injuries on anything the Reds do, but he is looking into it.

“I’ve been through this before,” he said. “We had a really nice team in the 2003 season in Seattle. All the starters made all their starts. No one was asked to do too much. Everything you would want. The next year we had a lot of injuries. It was immediately suggested that the pitchers were overworked or the system that they were in didn’t work out.

“Now, that being said, I think anybody who has injuries that are copious and run over a stretch of time you have to look at if there’s anything we’re doing. I have great confidence in what we’re doing here. . . There’s no reason to suggest there’s anything wrong with our protocols.”

The Reds had all five pitching starters make every start in 2012.

“We haven’t changed our protocols,” Price said. “I don’t think there’s anything to find. I think it’s a bad stretch.”

Here’s a run down in injuries:

> Cozart: He left Sunday’s game after running out a two-base error. He was having pain in his right knee.

Cozart will have to deal with tendinitis as part of his recovery from the major knee surgery he had in June. Certain movements worsen the condition.

“When he triggers it, it’s a very acute, sharp pain,” Price said.

> Mesoraco: He saw Dr. Timothy Kremchek to get his left shoulder checked out. The Reds were awaiting the results.

> Bailey: Bailey had some inflammation in his surgically repaired right elbow.

“It’s the triceps nerve,” Bailey said. “I’ll probably be shut down five days to a week.”

> DeSclafani: He still hasn’t gotten over the oblique strain suffered in spring training.

“He had some discomfort with the oblique,” Price said. “I don’t know if that’s just scar tissue breaking away or the injury’s not healed. I talked to him today. He’s not 100 percent.  I don’t what the next step is.”

> Duvall: He was available Monday. “I haven’t heard anything that he’s not capable of playing,” Price said

John Lamb, who is coming back from offseason back surgery, was scheduled to start Monday for Triple-A Louisville, but ultimately spent that game in the bullpen. He would seem to be a candidate to start Tuesday — if Moscot can’t go.

Tim Adleman started for Iglesias (shoulder) on Sunday. Edelman is scheduled to make another start on Friday.

Price said the club has not talked about going with top prospect Robert Stephenson or No. 2 prospect Cody Reed.

Reed returned to the Louisville rotation Sunday and allowed one hit over seven shutout innings.

“It’s still electric stuff,” Price said. “The game reports are off the charts as far as make-up.”