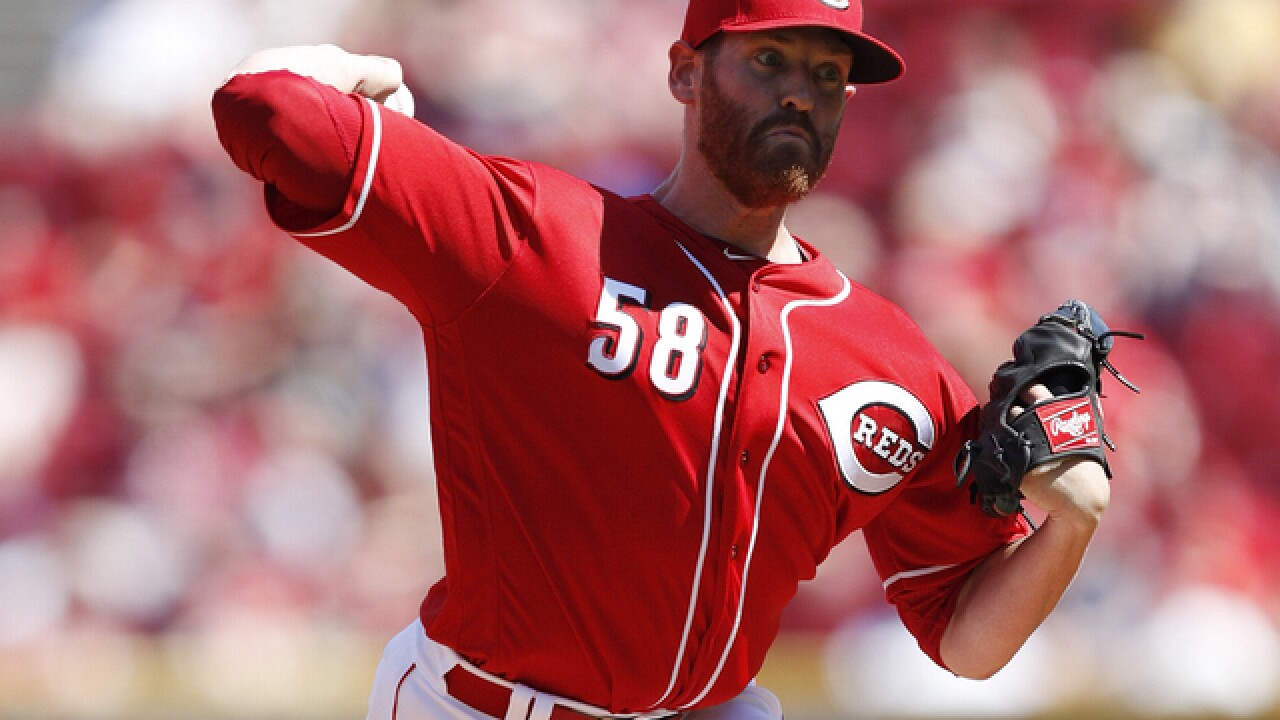 Joe Robbins
<p>CINCINNATI, OH - JUNE 11: Dan Straily #58 of the Cincinnati Reds pitches against the Oakland Athletics in the first inning of the game at Great American Ball Park on June 11, 2016 in Cincinnati, Ohio. (Photo by Joe Robbins/Getty Images)</p>

CINCINNATI (AP) -- Jay Bruce long home run early in the game put the Reds ahead. His running catch in the ninth kept them there.

Bruce hit a two-run homer off Daniel Mengden, who made his major league debut after a speedy rise through the minors, and made a run-saving catch at the end on Saturday as the Cincinnati Reds held on for a 2-1 victory over the Oakland Athletics.

The A's have dropped seven in a row - all on the road - and have scored two runs or less five times. Bruce provided what the Reds needed to beat a struggling team.

"The home run and the catch in the corner - he saved the game for us," starter Dan Straily said.

Also, he took the luster off an impressive big league debut.

The 23-year-old Mengden (0-1) was acquired from Houston last July as part of the deal for Scott Kazmir. The fourth-round draft pick in 2014 started the season in Double-A, but he needed only two months to make it to the majors. He gave up six hits, walked four and struck out five in 5 2/3 innings, throwing 104 pitches to hitters he used to play in video games.

"You try to stay as calm as possible," Mengden said. "The first inning was something I've been dreaming about since I was 6 years old. It was a little nerve-racking.

"After that first inning, I thought I slowly settled in, inning after inning, as the game went along. It was a lot of fun."

Straily (4-2) allowed Danny Valencia's RBI single during seven innings against his former team. Ross Ohlendorf gave up a pair of singles in the ninth, but Bruce made a running catch of Marcus Semien's fly ball into the corner to save a run. Ohlendorf fanned pinch hitter Billy Butler to end it, getting his second career save and his first of the season.

For Oakland, it was a chance to see a pitcher expected to play a big role in coming years. Mengden wasn't considered for the rotation during spring training after getting no higher than Class A last year.

The righty has an unusual windup, one that started with him emulating Dontrelle Willis' high leg kick. He gets the sign with his glove held in front of his face, and then briefly pauses after raising his hands behind his head. In the stretch, he brings his hands high above his head before setting them again at his waist.

Mengden fanned Zack Cozart, the first batter he faced. He got in trouble in the third by walking Joey Votto and leaving a fastball up and over the middle of the plate to Bruce, whose estimated 439-foot drive to right field landed a few rows from the top of the stands. Bruce's 14th homer gave him a team-high 44 RBIs.

Bruce has hit six homers in his last 14 games.

Straily pitched for Oakland from 2012-14, including a playoff game in 2013. He repeatedly pitched out of trouble against one of the AL's least-productive offenses. Oakland loaded the bases with two outs in the fourth, but center fielder Tyler Holt made a diving catch of Billy Burns' line drive to end the threat.

The A's have lost their last nine road games overall, their worst slide since they dropped 11 in a row on the road in 2005. They're 12-20 on the road this season.

RH Daniel Wright will start for the Reds on Monday in Atlanta instead of Alfredo Simon, who is moving to the bullpen. Simon was 2-5 with an 8.67 ERA in his last nine starts. Wright has made one start and two relief appearances.

Holt jammed his left hand and wrist while diving headfirst into third base in the second inning. He immediately grabbed the wrist and winced, but stayed in the game.

LHP John Lamb (1-3) has gone seven innings in two straight starts, the only Reds pitcher to do that this season.