Reds could be better than they look this year 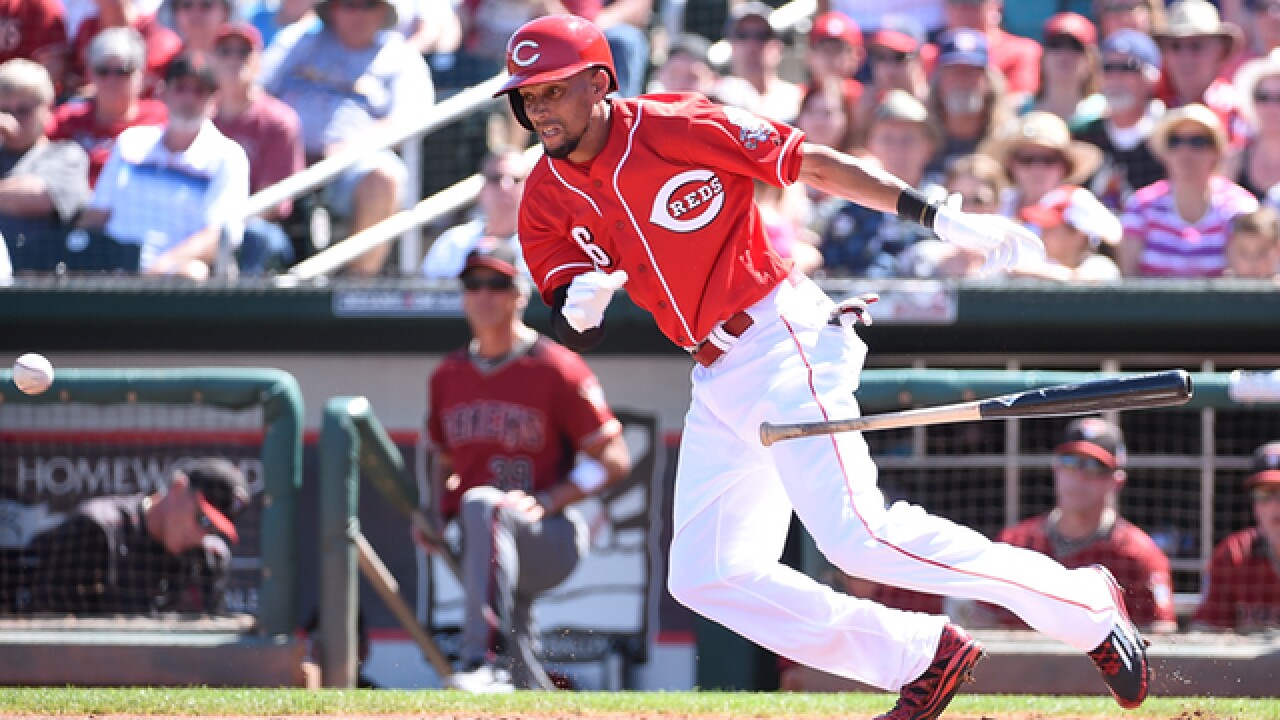 Norm Hall
<p>GOODYEAR, AZ - MARCH 20: Billy Hamilton #6 of the Cincinnati Reds runs out of the batter's box to first base after laying down a bunt during the first inning of a spring training game against the Arizona Diamondbacks at Goodyear Ballpark on March 20, 2016 in Goodyear, Arizona. He reached base safely on a throwing error. (Photo by Norm Hall/Getty Images)</p>

CINCINNATI -- It's a lot easier to talk about why something isn't going to happen than why it might. It's the way life is: negatives are always easier to talk about because it usually only takes one negative to completely nuke everything positive in just about any situation.

Think about it: you do 99 things right in whatever your job is, or your personal life, and do one thing wrong and you seem like a total idiot. it's no different in sports and it applies a lot to what the 2016 Cincinnati Reds are all about. Ask around, judge for yourself. Listen to what's said in your world, in the world of radio and TV. Read what is written, and it's not hard to come to the conclusion that this season is going to be baseball's version of a root canal: lot of discomfort and a good chance you'll spend more time trying to get over it than enjoy what it might lead to.

Every expert and anyone with an opinion believes the Reds are going to be awful this year. They'll point to trades that have dispatched stars like Todd Frazier, Aroldis Chapman, Mike Leake and Johnny Cueto. They'll point to a pitching staff that's been desiccated by injuries this spring and populated with too much inexperience. They'll hold up as evidence a bullpen as porous as cheese cloth and management and ownership that has dumped salary at every chance. And none of that is untrue.

Look, I'm not into blowing smoke, puffing sunshine, sea shells and balloons. If my opinion runs in that direction, great. But I've always been a realist. At the risk of abdicating that, let me give you seven good reasons why I think this season may not be the dumpster fire a lot of people think. Don't get me wrong: I think the Reds and the Cubs, Pirates and Cardinals will go in opposite directions for a good part of this coming season. But here's why I think it won't be Dunkirk, circa 1944.

1: Robert Stephenson and Cody Reed. The starting pitching will get better as the season rolls along. Both Stephenson and Reed will be on the Major League roster sooner than later. They were only sent to the minor league camp because of one thing: money. If they had been with the team Opening Day, their Major League "clocks" would be ticking. By leaving them in the minors to start the season, the Reds will have an extra year before having to deal with both in free agency.

Stephenson struggled for most of last season. But he remains the Reds' top prospect. His robust 9.58 ERA in four spring starts this year could be alarming. But last season in AA and AAA, Stephenson had a 25 percent strikeout rate. Reed, I believe, was the steal of last year's trades. Some metrics have Reed comparable to what Roy Halladay was at his age. He's 6-5 and his fastball tops out in the mid-90s. And, Reed is left handed.

2: Eugenio Suarez. Think about this: the Reds got Suarez in a deal a year ago from the Tigers for Alfredo Simon. Now, they have Simon back on the roster. Suarez played in 22 games this spring and reached base in all of them. He hit .356 with a .457 OBP. And this is after hitting .280 last season.

3: Joey Votto. This is a fact even the Votto haters can't dispute. If elite is defined as a player in the 90th percentile, then Joey Votto is more than elite. Seven hundred fifty players will make Major League rosters. Votto is clearly among the top 75 players in the game. This Spring, Votto hit an insane .455 and got on base at a .529 clip.

4: Jose Peraza. In a phrase, Peraza is Billy Hamilton insurance. Hamilton had a miserable spring. But the Reds will ride with him because he's fast and he plays good defense. But that will only last for so long. He's batting 9th again to start this season. That's of absolutely no value to a team that desperately needs him to lead off.

If Hamilton starts out 2-25 or 3-37, which is very real since he walked just twice this spring and got on base just over 25 percent of the time, here comes Peraza. This guy can play short, second and center and corner outfield. He hit .281 and got on base less than 30 percent of his plate appearances. But in AAA last year, Peraza hit just a tick below .300.

5: Injured pitchers will return soon. The Reds will start this season with two pitchers some projected to be starters, hurt. They'll also start the season with Homer Bailey on the DL. But Bailey is on track to join the team in early May. And Moscot, who threw pain-free this past Monday, could be ready by the end of April. Michael Lorenzen's situation is a bit dicier. He was diagnosed mid-camp with a UCL sprain. That's the ligament in the elbow that, when torn, requires Tommy John surgery. The Reds believe rehabilitation will get Lorenzen pitching again soon. The bottom line on all of this: when Moscot, Lorenzen and John Lamb, who's recovering from back surgery and is expected to return in early May, the Reds will have a wealth of options for their five man starting rotation. The odd men out could go to the bullpen. And that will help solve the problem there.

6: Scott Schebler and Adam Duvall. This could conjure up memories of the Lance Nix-Johnny Gomes platoon that helped the Reds to playoff appearances a few years back. Schebler was part of the deal that sent Frazier to the White Sox. Duvall came to Cincinnati in the Mike Leake trade. Both have had decent springs. Schebler hit .288 and got on base at a .354 clip. Duvall hit .313 with an on base percentage of .324.

7: Jay Bruce. Let's face it: the Reds would've traded Bruce this winter for you. Wisely, when a three-team deal fell apart about six weeks ago, they became more selective in what to do with him. Bruce has had a decent spring. He hit .286 and got on base at a .355 clip. But here's the better stat: Bruce struck out only nine times in 59 plate appearances. He's got one year to go on his contract. The Reds hold an option on him for 2017 which they'll surely decline. So Bruce knows on this, his 29th birthday, that if he can hit like he did in 2012 and 2013, he'll have a big contract waiting for him somewhere. I think he has now become a valuable asset for the Reds come the trade deadline.

Will any of this happen? Is it more of a hope than a probability? I don't know. There's no one, anywhere, who knows for sure. Baseball is a business where you only have to be right 30 percent of the time and Cooperstown could be calling. But I think for all of this, those who believe this team will win just 60 games or 70 games are wrong. I may be too. It's all just lip flapping until they start keeping score.