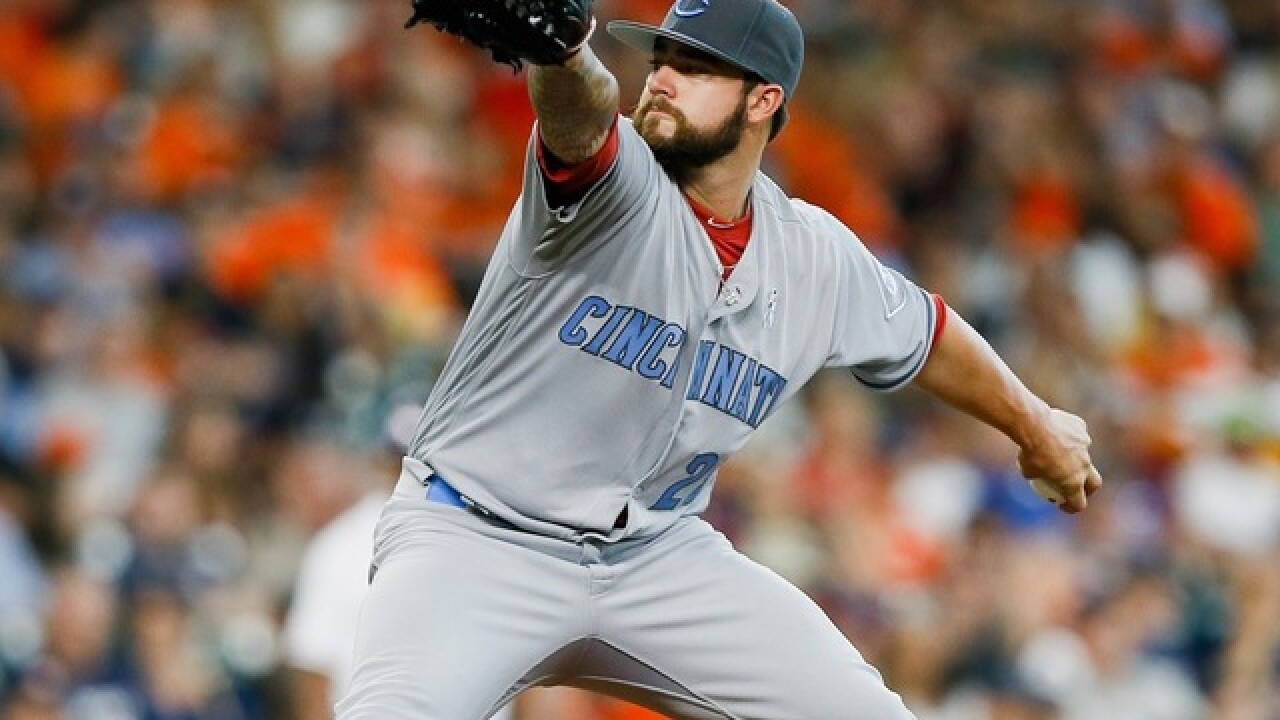 Bob Levey/Getty Images
<p>HOUSTON, TX - JUNE 19: Brandon Finnegan #29 of the Cincinnati Reds pitches in the first inning against the Houston Astros at Minute Maid Park on June 19, 2016 in Houston, Texas.</p>

HOUSTON -- Evan Gattis and Luis Valbuena homered, driving in two runs each, to help the Houston Astros to 6-0 win over the Cincinnati Reds on Sunday.

Mike Fiers (5-3) allowed four hits and struck out five in 5 2/3 scoreless innings. He left the game when Jay Bruce's line drive hit him in the thigh for a single with two outs in the sixth. Chris Devenski took over and allowed one hit in 3 1/3 innings to complete the shutout and pick up his first save.

Brandon Finnegan yielded five hits and four runs in five innings to snap a streak of five straight games where he lasted at least six innings.

Gattis drove in a run with a double in the second and Valbuena followed with a single in that inning to put Houston up 2.

Valbuena added a solo home run in the fifth inning off Finnegan (3-5) and Jose Altuve added a sacrifice fly in that frame. The home run by Gattis came in the seventh to make it 5-0.

Carlos Gomez, who has struggled most of the season, extended his hitting streak to a season-high five games with an RBI double in the eighth.

Danny Worth singled with two outs in the second before scoring on the double by Gattis to make it 1-0. Valbuena followed with his single to center field to push the lead to 2-0.

Fiers plunked Eugenio Suarez to start the fifth before a one-out single by Tucker Barnhart. But the Reds came away empty-handed when Suarez was caught trying to steal third and Fiers struck out Tyler Holt.

Valbuena sent the first pitch of Houston's fifth into the seats in right field for his eighth homer to make it 3-0. Jake Marisnick walked before George Springer grounded into a force out that left Marisnick out at second. Springer stole second base and took third on a wild pitch before Marwin Gonzalez walked.

Altuve's sacrifice fly came next to make it 4-0. Billy Hamilton robbed Altuve of extra bases when he ran it down almost to the warning track in center field and dived to grab it. Hamilton jumped up after the catch and got it to Brandon Phillips who threw it to first base to double up Gonzalez at first and limit the damage.

Gattis homered for the second straight day after not getting a hit in the previous six games when he launched a pitch from JC Ramirez to left field to push it to 5-0 in the seventh.

Marisnick denied Votto of a hit when he sailed through the air to snag his fly ball to left field for the third out of the eighth inning.

Reds: Cincinnati has an off day on Monday before Anthony DeSclafani (0-0, 2.08) pitches in the opener of a two-game series at Texas. DeSclafani allowed six hits and four runs in 2 2/3 innings in a 9-8 loss to Atlanta in his last start on Wednesday.

Astros: Doug Fister (7-3, 3.26) will pitch for Houston in the opener of a three-game series with the Los Angeles Angels on Monday. Fister picked up his sixth straight win by allowing five hits and two runs and driving in two runs in 7 1/3 innings of a 5-2 win at St. Louis on Wednesday.