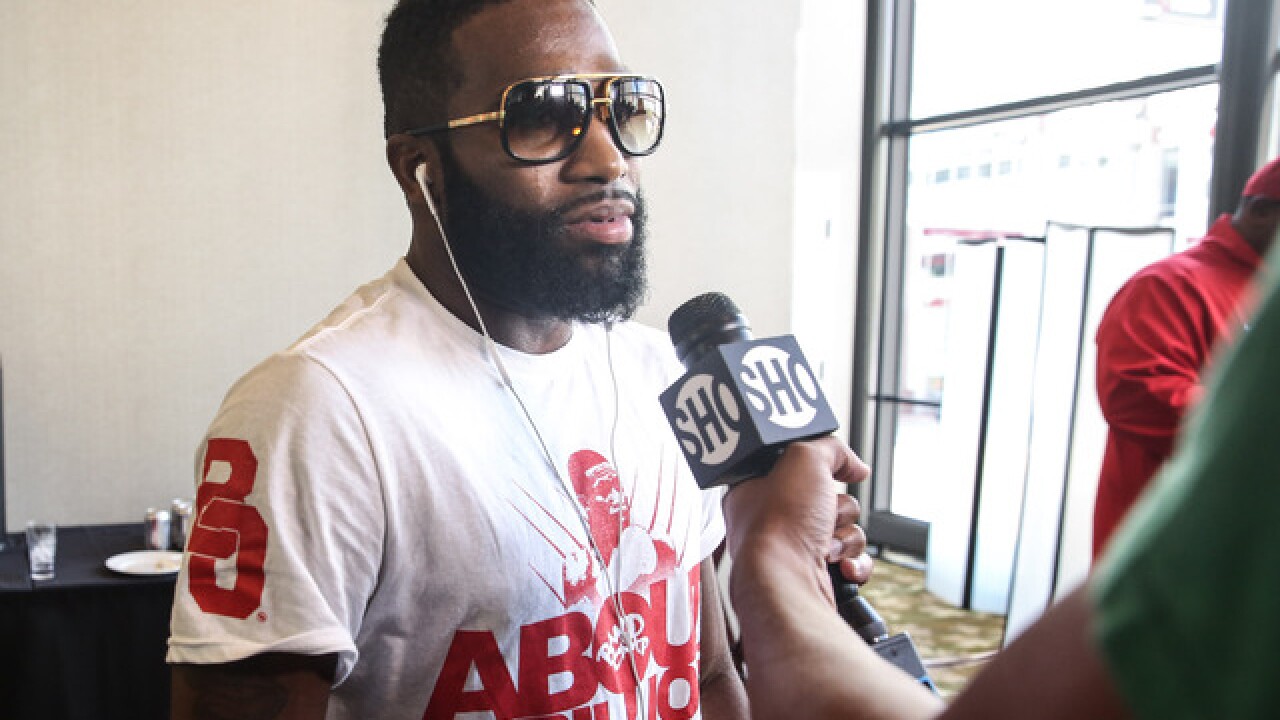 Showtime
<p>Adrien Broner is asked a question by a TV reporter during a press event for his upcoming fight against Emmanuel Taylor. (Stephanie Trapp / SHOWTIME)</p>

WASHINGTON (AP) -- Adrien Broner spent much of the time before his latest fight trading verbal barbs with Floyd Mayweather.

"Somebody that I look up to, someone that I admire took the chance to do an interview and talk bad about me," Broner said. "I'm a man - Floyd has got to see me."

Broner's defeat of Theophane, a fighter promoted by Mayweather, leaves the WBA super lightweight title vacant. The bout was supposed to be Broner's first defense of the belt, but he weighed in 0.4 pounds over the 140-pound limit Thursday and was stripped of the title.

That setback appeared far from Broner's mind, though, as he continued his words with Mayweather during TV an interview.

Mayweather retired following the 49th and final victory of his unblemished career last September. He sat ringside throughout the fight, and laughed and flashed a wide smile during Broner's comments.

Now 26, Broner (32-2, 24 KOs) has been compared to Mayweather throughout his career, both in terms of his counterpunching style and image.

Broner's latest fight went on amid reports of warrants for his arrest on felony assault and robbery charges in Ohio, stemming from an incident in January.

"As you know, I've been going through a lot and for me to come in here and bottle everything up and do what I did, I want to give myself a pat on the back," Broner said.

Broner is expected to turn himself in to authorities on Monday.

Theophane (39-7-1) could've won the title with a victory, but he never looked like a serious threat before referee Luis Pabon stopped the fight 1:10 into the ninth round.

First, Broner caught Theophane with a body shot and then a right hook, chasing him onto the ropes. With Broner punching furiously, Theophane slipped away, backpedaled and appeared to lift his glove toward Pabon, who stepped in immediately.

Broner promised a stoppage on Wednesday, but for a time, Theophane looked to have weathered the worst. And by the eighth, a scattering of boos could be heard amid the crowd of 8,172 at the DC Armory in a city Broner calls his second home.

Still, he thanked the city after the fight, even if he couldn't have the same affection for Mayweather, someone he said was once a mentor.

"You say you love somebody, and you call somebody your little brother, and somebody that look up to you," Broner said of Mayweather. "But on every interview that you do ... you talking down on this man. How the (heck) can you talk down on your little brother?"