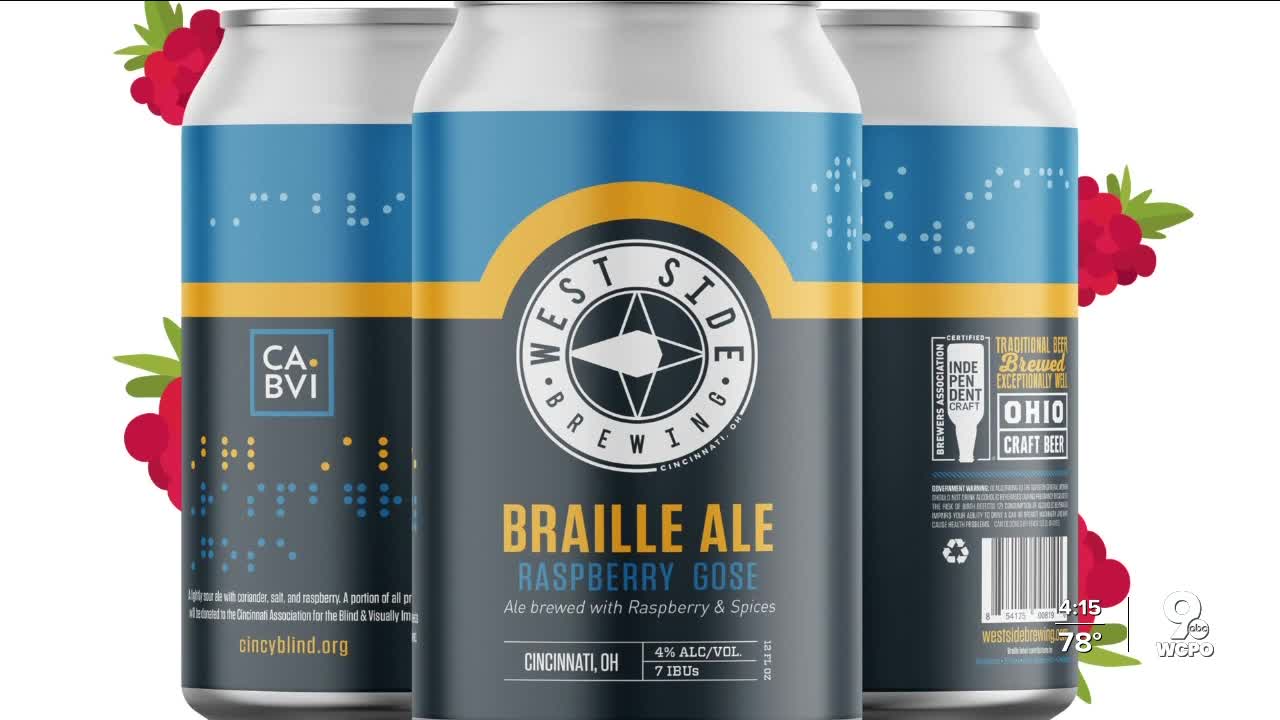 CINCINNATI — Imagine walking into a gas station or grocery store, blindfolded, placed in front of a refrigerated display case full of canned drinks and told to grab something to drink.

"If you think about being blind or visually impaired, how do you know if you are drinking a beer or a soda?" said Hanna Firestone, community relations and development specialist for the Cincinnati Association for the Blind and Visually Impaired (CABVI).

She added that the question is, in part, why CABVI exists.

"Our mission at CABVI is to empower blind and visually impaired people of Cincinnati to lead more independent lives," Firestone said.

In order to further that mission through fundraising, and to drive the point home, CABVI has partnered with West Side Brewing on a new collaborative beer, the Braille Ale. The raspberry gose ale will debut in a uniquely labeled can in the brewery's Westwood taproom on Aug. 27.

"As far as we're aware, no brewery has ever put braille on an actual beer can," said Joe Mumper, co-founder and CEO of West Side Brewing. "And so, the beer can itself will have visible print, but it will also have raised braille print."

Mumper said the collaboration began in late 2019 after one of the brewery's salespeople brainstormed with friends who work at CABVI.

"We've done a variety of events with different non-profits and charities," Mumper said. "We have events here in the taproom where we donate a percentage of our sales in a given night to a charity."

Firestone said the idea to design a beer can label with braille printed on it made the best sense.

"I come from a design background, so I think accessible design is really important," she said. "Assuming sighted is the norm is not the best thing to do. So we want to be able to bring that out to anyone who is blind or visually impaired -- that they know what kind of beer they are drinking and they don't have to ask anybody else."

What neither CABVI nor West Side Brewing realized until they started was just how difficult it would be to produce a Braille beer can label.

"I know the process was complicated," Firestone said. "I know they had to order a part from Germany to be able to get this Braille on the can."

West Side Brewing will start distributing the six-packs of cans to local retail outlets for sale on Aug. 28. Mumper said a portion of each sale will be donated to CABVI. That money will help support the organization's radio reading program and audio mobility services among other things, Firestone said.

"We do all of that only with the support of our community and the dollars that we can bring in," she said.

Mumper said when the planning for the collaboration first began, the brewery wanted to host a bigger kickoff event. COVID-19, though, changed those plans.

"We're hoping this is the first of many collaborations with the CABVI," Mumper said. "We're wanting to do this beer on an annual basis."