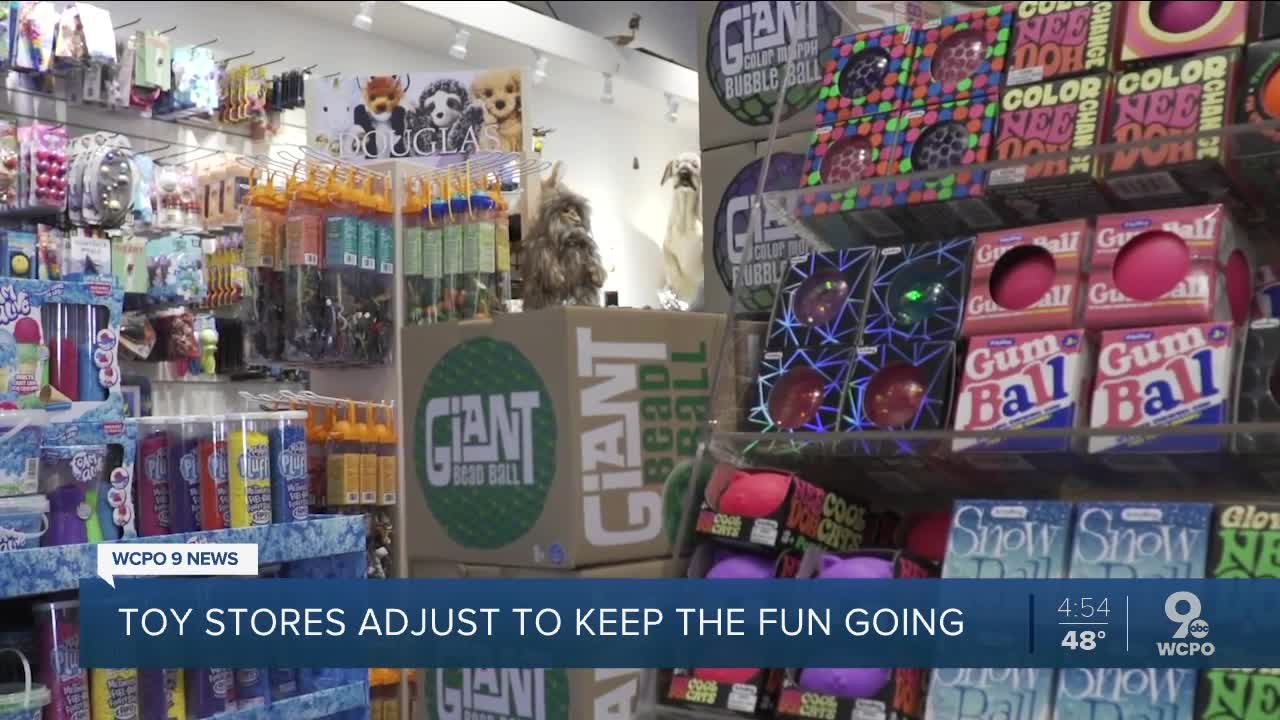 Toy stores in the Tri-State are finding new ways to bring fun to your home while storefronts are closed.

No matter the situation, kids need to have fun.

In the midst of the coronavirus pandemic, that is what two local toy store owners are trying to do — bring a little levity to children, including their own, during uncertain times.

"My wife and I, we have four kids," said Elliot Warner, owner of Coolest Toys on Earth.

Warner operates two Coolest Toys on Earth locations. He opened his first store 15 years ago at 314 Main St. in Milford and the second three years ago at 6840 Wooster Pike in Mariemont. Why get into the toy business?

"Life is short," he said. "You gotta go to work. There’s no way out of that, so you might as well sell toys for a living.”

In Northern Kentucky, Kelley Stevens shared a similar passion for play. The mother of eight began working at the Learning Express, located at 2812 Town Center Blvd. in Crestview Hills, Kentucky, in 2013.

She then bought the store from its former owners in 2015 after they decided to not renew their lease at the Crestview Hills Town Center.

Warner and Stevens are both now innovating to save their stores and get toys into the hands of children during the COVID-19 pandemic.

"We have adjusted by taking pictures (of toys) and posting them on Facebook and having virtual shopping through pictures, and then they can message us with what they want,” Stevens said. "They’ll circle a little thing on the wall, you know, ‘Do you still have this in stock?’ And then we get back to them.”

Warner said he has built an online ordering system for customers and plans to launch an entirely new website in May.

"We can allow you to take advantage of curbside pickup, free shipping, free delivery," Warner said.

He added that puzzles are the hot ticket item right now, and he has made sure his store has plenty of them.

Both toy store owners emphasized they have a large selection of learning and play toys to help the whole family play together, too.

“We have this giant soccer ball, and we break that thing out and it’s 'go, go, go' until sundown," Warner said. "I mean, that’s fun stuff that gets the whole family outside."

Stevens added "when parents tell us what their children are interested in or what they are studying at that point, then we can find options for them.”

More than anything else though, Warner and Stevens said they are both appreciative of their customers and glad to offer healthy distractions that help children cope.

"And we try not to think about this COVID-19," Warner said. "Of course, we want to maintain social distancing whenever we are doing business ... but we gotta have fun and learn."