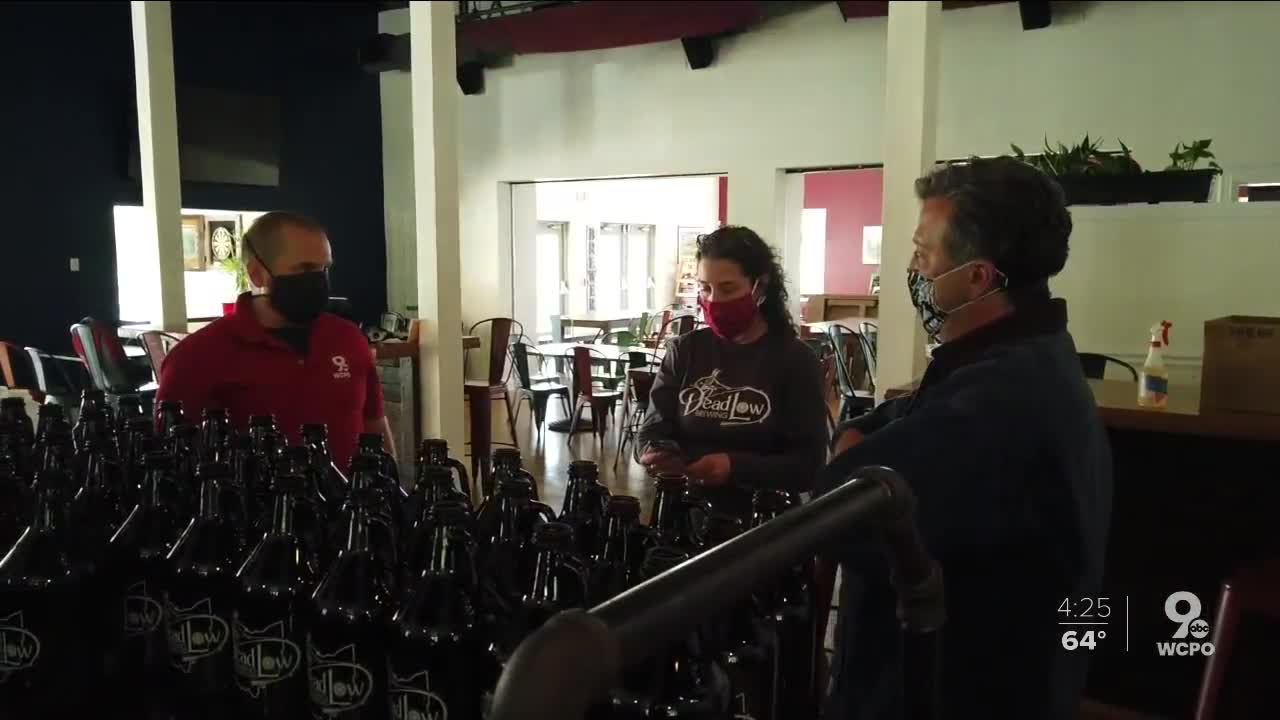 "It was just a natural transition to say, 'We have all of this beautiful, empty space. Let's put it to good use.'"

CINCINNATI — For Catherine Hall and her fellow Dead Low Brewing co-founders, deciding to close the brewery's doors after Ohio's ban on dine-in service went into affect was one of the hardest decisions they ever hope to make as business owners.

"Closing down was just a very difficult decision to begin with," Hall said. "We had only been open five-and-a-half months."

Closing also meant laying off all 69 of Dead Low's employees. Paul Ganim, another of Dead Low's co-founders said those layoffs actually influenced his decision to close completely, even if breweries are considered essential businesses in Ohio able to offer carryout and delivery services during the pandemic.

"We felt it was the best thing to do for the safety and health of our crew," he said.

Ganim added he views Dead Low's staff as family and he would never want to put family in harms way. And he understands the potential dangers the coronavirus pandemic presents to the public.

"You know we have a lot of front line healthcare providers in our immediate family," Ganim said.

Those relationships are what also led Dead Low to make a unique offer to medical providers after the brewery locked its doors on March 15. The founders put out a call on social media asking RV owners to park their vehicles in Dead Low's empty parking lot off of Kellogg Avenue, so medical workers exposed to COVID-19 could temporarily live in them for free.

"It was just a natural transition to say, 'We have all of this beautiful, empty space. Let's put it to good use,'" Ganim said.

Local Curry Electric volunteered to run electric to each RV and Rumpke offered to take care of sanitation. Local law enforcement are currently patrolling the RV lot as well.

"We're even able to do laundry service," Ganim said.

"Primarily because they have immunocompromised family members at home,"Ganim said.

He added those medical personnel are welcome to stay in the RVs for as long as they need.

Meanwhile, as Ohio slowly starts reopening businesses closed under the stay-at-home order, the founders are starting to look at how to rehire and bring those laid-off employees back to work.

"Right now, it's really a balancing act of running a bunch of different scenarios," Hall said of what Dead Low's 300-seat dining area will look like once dine-in service returns. "We've already set up the tables, spread them out."

Hall and Ganim said they have no doubt when Dead Low reopens it will return strong thanks to loyal customers.

"We know we have a great place and a great brand," Hall said.

"And we're prepared for whatever the governor authorizes, and we're ready to get back to work," added Ganim.