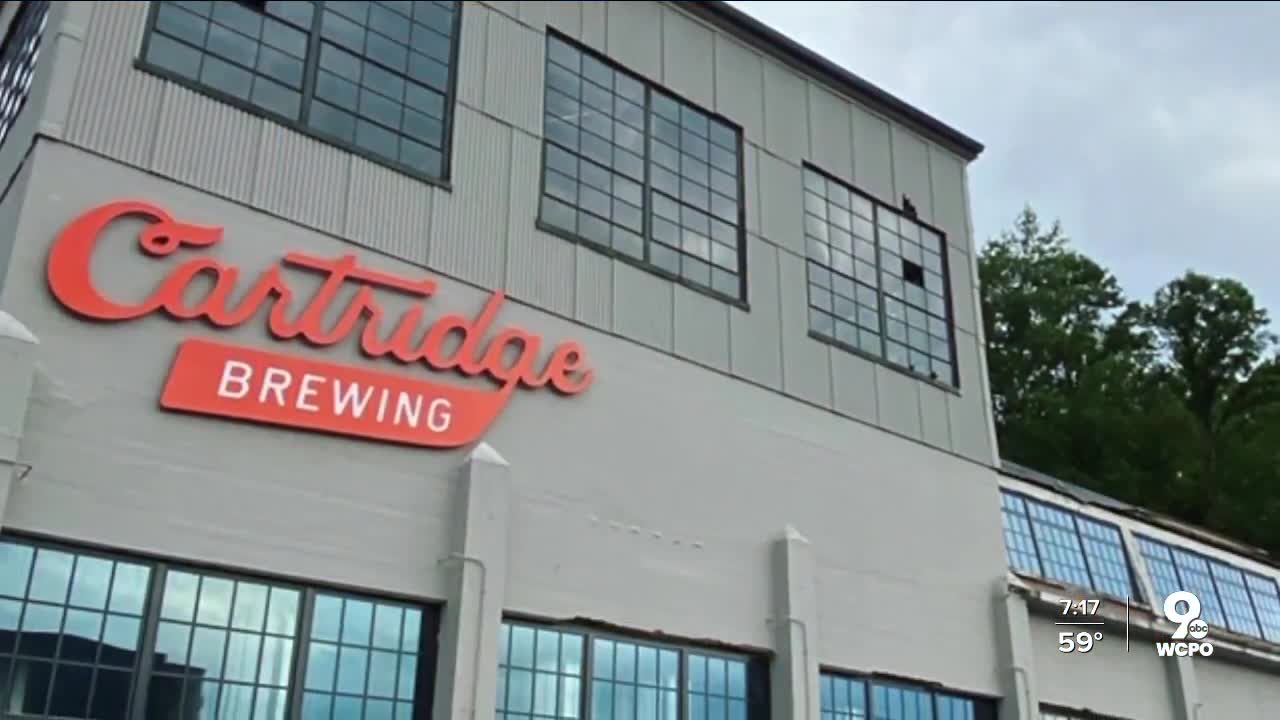 In less than a month, Peters Cartridge Factory in Kings Mills will be reborn as a brewery and then as 135 apartments by the new year.

KINGS MILLS, Ohio — A century ago it was the factory that helped the United States and its allies to win World War I.

In less than a month, Peters Cartridge Factory in Kings Mills will be reborn as a brewery and then as 135 apartments by the new year.

"We just had to find and rebuild into something beautiful, which is what we are trying to accomplish," said Kyle Hackbarth, chief operating officer of Cartridge Brewing Company.

Hackbarth, along with his wife, Lindsey, and other business partners, has spent the past three years working to convert one of the outbuildings that made up the Peters Cartridge Factory into the Cartridge Brewing Co.

"The name 'Cartridge' just evokes back to what this place is and was," Hackbarth said.

Peters Cartridge Company began as Kings Powder Company in the late 1800s. By the early 1900s, thanks to mergers and growth, Kings became Peters, a premier manufacturer of shotgun casings and bullets.

According to Hackbarth, during its height of production, Peters produced a million cartridges a day for American soldiers fighting in Europe during World War I.

The original plant ceased production before the end of World War II. For a time, the facility manufactured vinyl records for Columbia Records and then acted as a rickhouse for Seagram before closing completely in 1968.

The factory's location was then declared a Superfund cleanup site in 2012 by the Environmental Protection Agency after contaminants such as lead left by the manufacturing of cartridges were found in the site's soil.

"It looked as if a bomb had gone off in here and had then just been neglected for years," Hackbarth said, describing the building Cartridge Brewing will be located in when he first saw it in 2017. "So, every roof had a forest growing on it. There were full-grown oak trees growing above us. There was a tree that would be located directly behind me if we still had it there."

He said it was an uphill battle to gain federal approval to even begin rehabilitation on the site due to its Superfund Site status. Three times longer than either Hackbarth or his business partners originally anticipated.

"We are very, very close," Hackbarth said after the brewery buildout experienced a series of delays beginning in 2018. "So, there is a date in mind and we think we'll be able to put that out to the public in the next week or so."

When the brewery does open it will initially be a ticketed event. People will be able to enjoy a full-service kitchen and bar, along with 10 craft beers on tap.

The decor and feel of the brewery also will reflect the facility's history, Lindsey Hackbarth said.

"We've been floored over the last three years with how much community excitement there is about this project," she said.

So much so that Lindsey Hackbarth has set up a Kickstarter campaign to allow patrons to purchase a share of ownership into the brewery.

"We have everything from $15 for two stickers to a cozy and cartridge bundle," she said.

The brewery will also tell the history of Peters Cartridge Factory through photos.

And honoring the past is ultimately what Kyle Hackbarth said he hopes his brewery does.

"This was a community hub that we are trying to bring back to life," he said.