As they are rescued, focus shifts to health of boys on Thai soccer team 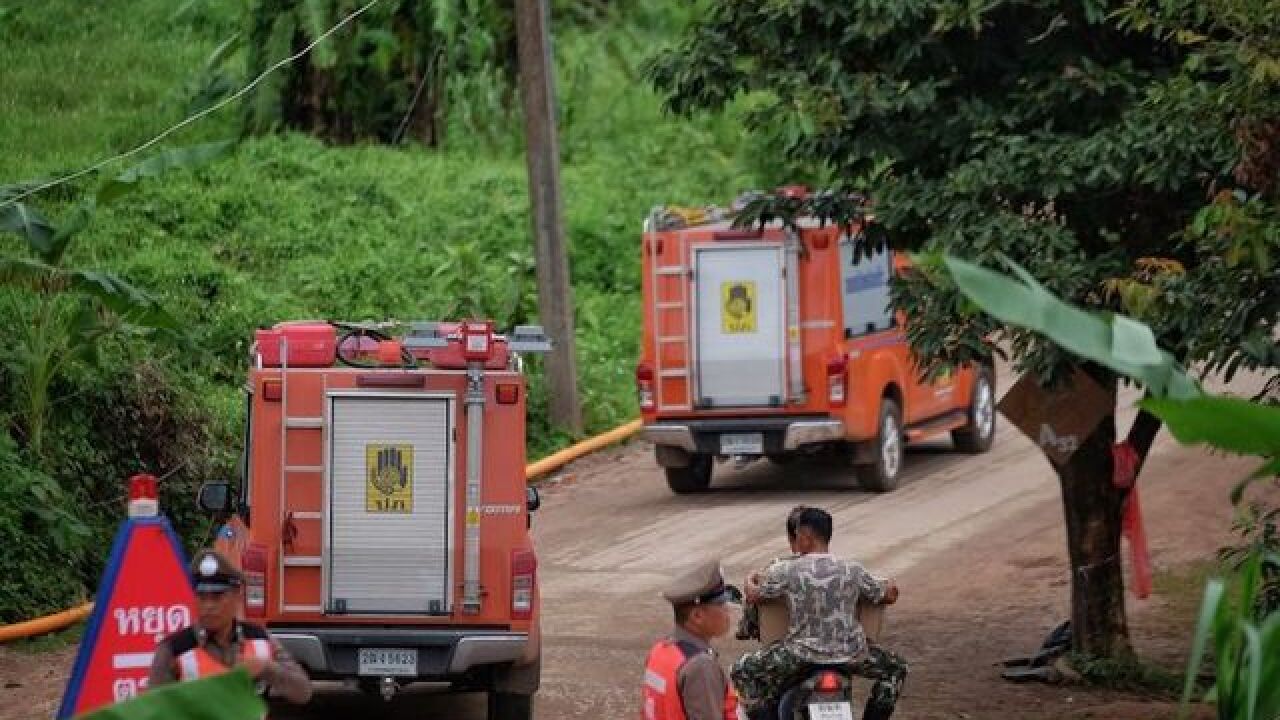 Image copyright 2018 Getty Images. All rights reserved. This material may not be published, broadcast, rewritten, or redistributed.
Linh Pham
<p>Fire trucks are seen heading to the scene at Tham Luang Nang Non cave on July 9, 2018 in Chiang Rai, Thailand. Divers began an effort to pull the 12 boys and their soccer coach on Sunday morning after they were found alive in the cave at northern Thailand. Videos released by the Thai Navy SEAL shows the boys, aged 11 to 16, and their 25-year-old coach are in good health in Tham Luang Nang Non cave and the challenge now will be to extract the rest of the party safely. </p>

As members of the boys' soccer team trapped in a cave in Thailand continued to be rescued Monday, the focus shifted to the boys' long-term health and getting them proper medical aid.

The plight of the 12 boys and their soccer coach captured international attention after they became trapped in the flooded cave more than two weeks ago. The boys range in age from 11 to 16.

Four boys were rescued Sunday, and four more boys were brought out of the flooded cave system Monday, according to a witness working with the rescue team, leaving four boys and their coach still inside.

A contingent of 13 international cave diving experts and five Thai Navy Seals descended into the watery network of underground tunnels below the Mae Sai mountains to reach the boys Sunday. The divers navigated a series of dark, flooded tunnels for up to six hours.

The rescue is two-pronged: to help the boys who have been brought out of the cave, while working to save the remaining boys and coach still trapped inside. The operation paused overnight for rescue workers to get some rest and refill supplies, such as oxygen tanks, and was suspended Monday after four more were rescued.

Health experts said, authorities would first be checking the rescued boys' exposure to a lack of oxygen while in the cave. Thai officials on Friday said oxygen levels in the cave air plummeted dangerously to just 15%.

"One of the major concerns is oxygen right now. They've been in an area where oxygen levels are low," Dr. Darria Long Gillespie of the University of Tennessee School of Medicine told CNN. "As soon as they get out, that's what they'll be checking: their oxygen levels and their breathing."

They will also be checked for malnutrition, dehydration and an array of other health effects.

Dr. Carole Lieberman, a psychiatrist who is also a scuba diver, called it "an amazing feat" that some of the boys had been rescued. She said officials would need to check for post-traumatic stress and other psychological effects on the boys.

The lack of oxygen in the cave, she said, "makes people feel less alert. It makes them move less. Some people describe it as being drunk, and it also decreases their mood."

She said it would be extremely important to relay the good news of the first boys' rescue dto the others who remain trapped inside. "That would be such a boost for their confidence," Lieberman said.

The four boys rescued Sunday are recovering under quarantine in a nearby hospital and are yet to see their parents. A family member told CNN Monday that they hadn't been told which boys had been pulled out, and who is still trapped in the cave.

Thailand's health secretary, Dr. Jessada Chokedamrongsook, said the boys may not be able to see their parents for a day or two after their rescues while they undergo treatment at the hospital.

The boys will "be evaluated by doctors for five to seven days," the secretary said. "They will be monitored day by day."

The hospital also issued a statement, saying the "next step is to make sure those kids and their families are safe because living in a cave has a different environment, which might contain animals that could transmit any disease."

"Anyone that has had contact with the boys, including their close family, will be closely monitored to make sure they are disease free," the hospital said. "They have been informed to call the disease control hot line ... if they have symptoms such as headaches, nausea, muscle plain, or difficulties breathing."

Thai Navy Seal chief Rear Adm. Aphakorn Yoo-kongkaew on Friday said oxygen levels in the cave air had dipped to just 15%. According to the US Department of Labor's Occupational Safety and Health Administration, the "optimal range" of oxygen needed in the air a person breathes in order to maintain normal function is between 19.5 percent and 23.5 percent.

As oxygen drops below the lower threshold of the optimal level, the body begins to undergo changes and may face the serious risk of hypoxia, the condition that causes altitude sickness, according to OSHA.

Dr. Norman H. Edelman, senior science adviser to the American Lung Association, said the boys' ability to survive "all depends on the mechanics of the ventilation and how big the air space is."

Because the boys and their coach have been trapped for more than two weeks, Edelman "hypothesized" that some ventilation is taking place, though he cautioned that he did not have detailed knowledge of the situation.

"The first thing that happens to the body as oxygen levels decline is, you have a signal to make you breathe more. It's totally analogous to climbing a mountain and going up to, say, 10,000 to 12,000 feet when the oxygen pressure declines," Edelman said.

The other problem the boys may experience with declining oxygen is increasing carbon dioxide, the gas we exhale with each breath, Edelman said.

"When carbon dioxide goes up, that's a strong stimulus to breathe, so they'll begin to feel short of breath," he said. "They may be dizzy, they may be confused, but if it happens slowly enough, they will adapt. It's just like climbing a mountain. They will eventually adapt to the low oxygen, unless it goes too low, of course."

Gillespie at the University of Tennessee said the youth of the boys actually plays to their advantage for survival.

"They are in the prime of their health," she said. "If anybody can endure these moments of potential lower oxygen and other physical challenges, it's going to be young, teenage boys."