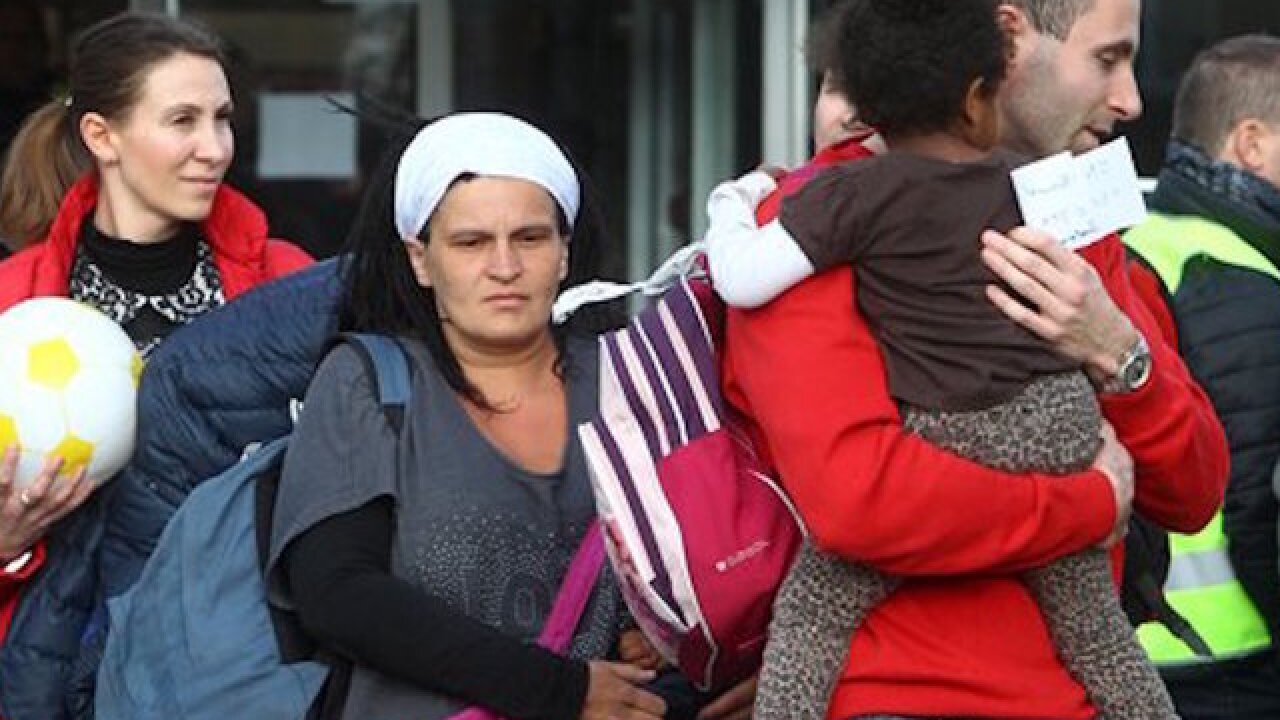 Copyright Associated Press
Michel Spingler
<p>Passengers leave a gym where they took shelter after the explosions, near the Zaventem Airport in Brussels, Tuesday, March 22, 2016. Bombs struck the Brussels airport and one of the city's metro stations Tuesday, killing and wounding dozens of people, as a European capital was again locked down amid heightened security threats. (AP Photo/Michel Spingler)</p>

A tearful, beloved cartoon adventurer, Tintin, quickly emerged as a symbol of solidarity in the chaotic aftermath of the Brussels bombings as social media users worldwide took to Facebook and other Web streams for check ins by loved ones potentially in harm's way.

On Twitter, on Instagram and elsewhere around the internet, the red-haired reporter in his signature trench coat with his white dog Snowy — the creations of Belgian cartoonist Herge — were shared as shocked and saddened versions of their usually indomitable and irrepressible selves.

Some cartoonists drew "too soon" criticism for depicting the stars of the comic series "The Adventures of Tintin" — made into a movie in 2011 by Steven Spielberg — as bloodied and battered.

Others on social media borrowed from the January 2015 Charlie Hebdo tragedy, using the hashtag "JeSuisBruxelles," or "I am Brussels," just as those after the Paris attacks did when spreading the sentiment "JeSuisCharlie."

Facebook, meanwhile, activated its "safety check" system yet again to help Tuesday within hours of the three deadly explosions at the Brussels airport and a metro station.

The system can provide an easy way for people to mark themselves as "safe" after a major disaster or crisis so that people searching for them will know they are unharmed. It has been used recently to help people communicate after major floods, earthquakes and other deadly attacks.

Facebook first deployed the service after the 2011 Fukushima tsunami and nuclear disaster in Japan. The company said it is still "working through" how and when it should be used. It was activated six times last year, providing notifications to more than 950 million people.

The Tintin cartoon books have been translated into 70-plus languages, from Chinese to Armenian, English to Spanish, just as social media users are lending their languages and voices of outrage, fear, defiance and concern to the cacophony following the blasts in Brussels.

The books have sold in the tens of millions of copies, but only in Belgium has the fearless reporter and his dog been ingrained in the DNA of most youngsters since the 1950s. Herge died in 1983 and is considered a national treasure in his native Belgium.

A more popular version of the Tintin meme in response to the explosions has him shedding a single tear as he hovers over a newspaper with a headline about the explosions, pal Snowy shaking nearby. Tintin utters "Mon Dieu," or "My God."

Accompanying Tintin in the flood of social media sentiment were altered images of Manneken Pis, a bronze statue of a naked boy urinating into a fountain's basin not far from Brussels Town Hall.

One showed the boy as a simple red line drawing against a black background as he urinated from on high onto a machine gun. Another had him doing the same on taped-together sticks of dynamite with the words: "Pis and Love," a peace sign drawn into the letter o.

The boy, dating to around 1619, was created by Brussels sculptor Hieronimus Duquesnoy the Elder. He's the father of sculptor François Duquesnoy. The statue has been repeatedly stolen and replaced. It is dressed in costumes on a regular weekly schedule, his wardrobe of several hundred outfits permanently housed in a museum.

Elsewhere around the Web, kind-hearted Belgians were tweeting offers of shelter to stranded travelers using the hashtag "PorteOuverte" or "OpenHouse" for non-French speakers. One in Antwerp threw in "food and Belgian beers for 1-3 people."

Others taking to social media found comfort in sharing YouTube clips, photos and drawings of another famous figure in Belgium, singer-songwriter-actor Jacques Brel, who was known for his soothing ballads.

The straightforward hashtag "Brussels" continued with "JeSuisBruxelles" through the day on Twitter around the world, also accompanied by "PrayForBelgium." Comment threads included "Tous Ensemble," or "All Together," but some social media users were more defiant.

An image of a cluster of Belgium's famous "frites," with one French fry standing above the others in a middle-finger salute, was accompanied by "I dont pray #jesuisbelge," the latter for "I Am Belgian."