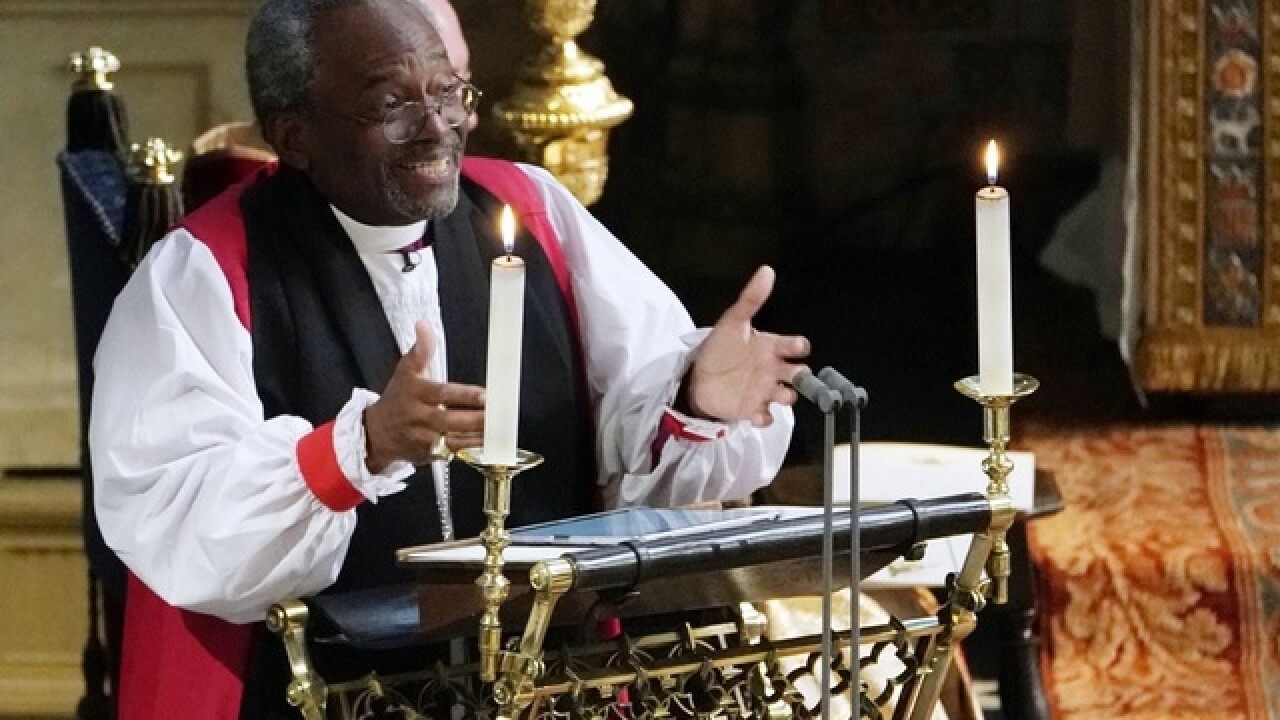 Image copyright 2018 Getty Images. All rights reserved. This material may not be published, broadcast, rewritten, or redistributed.
Owen Humphreys - WPA Pool/Getty Images
<p>WINDSOR, UNITED KINGDOM - MAY 19: The Most Rev Bishop Michael Curry, primate of the Episcopal Church, gives an address during the wedding of Prince Harry and Meghan Markle in St George's Chapel at Windsor Castle on May 19, 2018 in Windsor, England.</p>

WINDSOR, England -- Nothing captured the trans-Atlantic nature of Saturday's royal wedding as much as the guest preacher whose sermon brought American fire and flair to a very English church service.

The Most Rev. Michael Bruce Curry, the first black leader of the Episcopal Church in the United States, was hand-picked by Prince Harry and Meghan Markle to address their 600 wedding guests.

Curry was once pastor of St. Simon of Cyrene in Lincoln Heights, a Cincinnati suburb.

His passionate sermon on the theme of love, studded with quotes from the bible, Martin Luther King Jr and African-American spirituals, was a contrast to the more solemn and muted Anglican style the royal family is used to.

Many observers were surprised and delighted. BBC broadcaster Jeremy Vine tweeted: "The preacher is doing 50 in a 30 zone and it's brilliant."

Rewatch the entire ceremony in the player below. Curry's sermon begins about 2 hours 20 minutes in:

READ the full text of the sermon below.

Quoting civil rights King on the "redemptive power of love," Curry told the bride and groom "it's not just for, and about, a young couple who we rejoice with, it's more than that."

Curry, who like Markle's mother has African ancestors who were slaves in the U.S., said that even during their time of bondage, love helped those in captivity persevere.

"When love is the way, we actually treat each other, well, like we are actual family," he said in a sermon that touched on poverty, inequality and the healing power of love.

Harry and Markle exchanged a quick glance at one another at one point as Curry drifted from his prepared remarks and ad libbed while the queen looked on stoically. Camilla and Kate -- the Duchess of Cornwall and the Duchess of Cambridge -- traded sidelong glances.

Queen Elizabeth II, who as monarch holds the title of Supreme Governor of the Church of England, did not show any sign of discomfort and looked as stoic as she had through the entire ceremony.

There may have been a touch of royal relief when Curry wrapped up with "We gotta get y'all married now."

The crowds waiting outside for a glimpse of the royal couple loved it. Cheers greeted Curry as he walked uphill from the chapel along the procession route after the service. One man shouted "well done" -- prompting a smile and "God bless you" from the bishop.

The Episcopal Church is an offshoot of the Church of England in the United States and has been the spiritual home of many of the American founding fathers and U.S. presidents.

Even though its support for gay marriage has recently caused friction with the greater Anglican Communion, Archbishop of Canterbury Justin Welby said ahead of the ceremony that he was "thrilled" Curry would be speaking there, calling him a "stunning preacher."

Curry, 65, who is married and has two grown daughters, was born in Chicago and raised in Buffalo, New York. He began his ministry in Winston-Salem, North Carolina and also served as rector in Baltimore, Maryland, in addition to his time in Greater Cincinnati.

Selecting him to give the sermon was one of several personal touches Harry and Meghan put on the service, held in the 15th century St. George's Chapel at Windsor Castle.

Markle, who attended a Roman Catholic school, was baptized in March into the Church of England in preparation for the wedding and joining the royal family.

The ceremony was based on Common Worship -- the most modern of several Church of England service options -- and included prayers and hymns, as well as readings and musical selections chosen by the couple and their families.

That included a fusion of American and British elements, including by London-based gospel ensemble the Kingdom Choir's renditions of Ben. E. King's "Stand By Me" and Etta James' "Amen/This Little Light of Mine."

Teenage cellist Sheku Kanneh-Mason wowed the 600 guests with works including Franz Schubert's "Ave Maria." The cellist won the BBC's Young Musician of the Year contest in 2016, the first black musician to do so.

For all the individual touches, the service was dominated by tradition.

The pair read the Church of England wedding vows, promising to have and to hold, "for better, for worse, for richer, for poorer, in sickness and in health, to love and to cherish, till death us do part."

Then the archbishop pronounced them husband and wife.

"Those whom God has joined together let no one put asunder," he said.

And now in the name of our loving, liberating and life-giving God, Father, Son and Holy Spirit. Amen.

From the Song of Solomon, in the Bible:

"Set me as a seal upon your heart,

as a seal upon your arm;

for love is strong as death,

passion fierce as the grave.

Its flashes are flashes of fire,

neither can floods drown it."

The late Dr. Martin Luther King, Jr once said, and I quote: "We must discover the power of love, the redemptive power of love. And when we discover that, we will be able to make of this old world a new world, for love is the only way."

And there's a reason for it. The reason has to do with the source. We were made by a power of love, and our lives were meant - and are meant - to be lived in that love. That's why we are here.

There's an old medieval poem that says: "Where true love is found, God himself is there".

The New Testament says it this way: "Beloved, let us love one another, because love is of God, and those who love are born of God and know God. Those who do not love do not know God. Why? For God is love."

But love is not only about a young couple. Now the power of love is demonstrated by the fact that we're all here. Two young people fell in love, and we all showed up. But it's not just for and about a young couple, who we rejoice with. It's more than that.

Jesus of Nazareth on one occasion was asked by a lawyer to sum up the essence of the teachings of Moses, and he went back and he reached back into the Hebrew scriptures, to Deuteronomy and Leviticus, and Jesus said: "You shall love the Lord your God with all your heart, all your soul, all your mind and all your strength. This is the first and great commandment. And the second is like it: Love your neighbor as yourself."

Now, someone once said that Jesus began the most revolutionary movement in all of human history. A movement grounded in the unconditional love of God for the world and a movement mandating people to live that love. And in so doing to change not only their lives but the very life of the world itself.

I'm talking about some power. Real power. Power to change the world. If you don't believe me, well, there were some old slaves in America's Antebellum South who explained the dynamic power of love and why it has the power to transform. They explained it this way. They sang a spiritual, even in the midst of their captivity. It's one that says "There's a balm in Gilead..." a healing balm, something that can make things right.

"There is a balm in Gilead to make the wounded whole.

"There is a balm in Gilead

"To heal the sin sick soul."

And one of the stanzas actually explains why. They said:

You just tell the love of Jesus,

How he died to save us all."

Oh, that's the balm in Gilead! This way of love, it is the way of life. They got it. He died to save us all. He didn't die for anything he could get out of it. Jesus did not get an honorary doctorate for dying. He wasn't getting anything out of it. He gave up his life, he sacrificed his life, for the good of others, for the good of the other, for the wellbeing of the world, for us.

That's what love is. Love is not selfish and self-centered. Love can be sacrificial, and in so doing, becomes redemptive. And that way of unselfish, sacrificial, redemptive love changes lives, and it can change this world.

If you don't believe me, just stop and imagine. Think and imagine a world where love is the way.

Imagine our homes and families where love is the way.

Imagine our neighborhoods and communities where love is the way.

Imagine our governments and nations where love is the way.

Imagine business and commerce where this love is the way.

Imagine this tired old world where love is the way.

When love is the way - unselfish, sacrificial, redemptive.

When love is the way, then no child will go to bed hungry in this world ever again.

When love is the way, we will let justice roll down like a mighty stream and righteousness like an ever-flowing brook.

When love is the way, poverty will become history.

When love is the way, the earth will be a sanctuary.

When love is the way, we will lay down our swords and shields, down by the riverside, to study war no more.

When love is the way, we know that God is the source of us all, and we are brothers and sisters, children of God.

My brothers and sisters, that's a new heaven, a new earth, a new world, a new human family.

And let me tell you something, old Solomon was right in the Old Testament: that's fire.

Fire to a great extent made human civilization possible. Fire made it possible to cook food and to provide sanitary ways of eating, which reduced the spread of disease in its time.

Fire made it possible to heat warm environments and thereby made human migration around the world a possibility, even into colder climates.

Anybody get here in a car today? An automobile? Nod your heads if you did - I know there were some carriages. But those of us who came in cars, fire - controlled, harnessed fire - made that possible.

I know that the Bible says, and I believe it, that Jesus walked on the water. But I have to tell you, I did not walk across the Atlantic Ocean to get here.

Controlled fire in that plane got me here. Fire makes it possible for us to text and tweet and email and Instagram and Facebook and socially be dysfunctional with each other.

Dr. King was right: we must discover love - the redemptive power of love. And when we do that, we will make of this old world, a new world.

My brother, my sister, God love you, God bless you, and may God hold us all in those almighty hands of love.