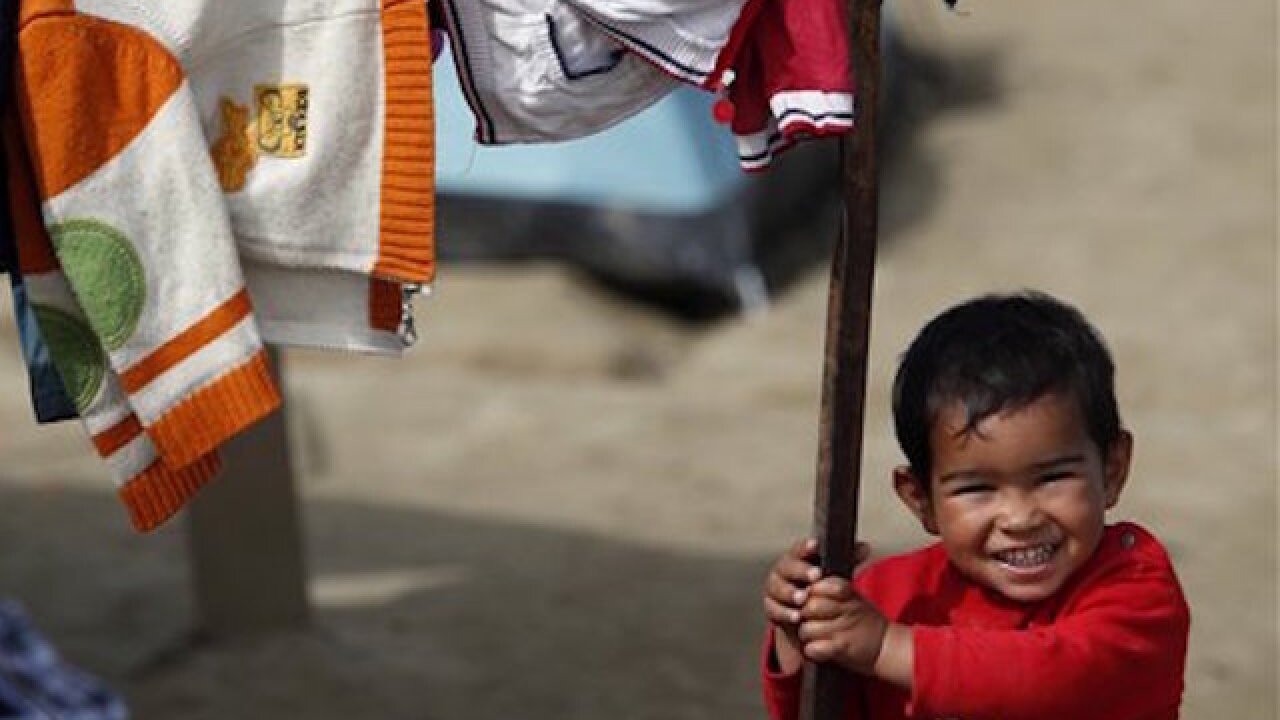 Copyright Associated Press
Amel Emric
<p>A migrant boy plays near his tent at the northern Greek border point of Idomeni, Greece, Thursday, April 14, 2016. More than 12,000 people have been stuck her for more than a month amid hopes that the border would reopen.(AP Photo/Amel Emric)</p>

LESBOS, Greece (AP) — Municipal crews were pressure-hosing streets, pruning trees and touching up building facades on this Greek island where Pope Francis will visit Saturday, a mission human rights groups hope will highlight the plight of refugees who fled their war-ravaged homes only to be denied entry to Europe.

The Vatican insists Francis' five-hour visit is purely humanitarian and religious in nature and isn't a direct criticism of the European Union's new deportation plan. But the image of Francis meeting with refugees slated for deportation will likely bring the controversy back to the world's attention, if briefly.

Francis will be joined by Ecumenical Patriarch Bartholomew, the spiritual leader of the world's 300 million Orthodox Christians.

The head of the Orthodox Church of Greece, Athens Archbishop Ieronymos II, arrived in Lesbos on Friday ahead of Francis' visit and said the ecumenical mission had one aim: "To take the problem we have been dealing with for so long and make it an international issue — to be not just a problem for Greeks, but for Europe and for all humanity."

The three religious leaders will visit a camp on Lesbos where 2,300 migrants and refugees are being detained for deportation to Turkey under the agreement between Ankara and the European Union to ease the flow of migrants to Europe.

"The pope's visit comes at a pivotal moment: Right as Europe is gearing up to send thousands of refugees back to Turkey, locking them up in the meantime in horrible conditions, frightened of the future," Gauri van Gulik, deputy Europe director at Amnesty International, told The Associated Press.

"These are people who fled the horrors of Islamic State, the Taliban, bombings in Syria and more. They deserve Europe's protection and care, and hopefully the pope can shed light on their plight."

Refugees and migrants reaching Greece have been arrested since March 20, when the EU-Turkey deal took full effect. Assisted by police officers sent from across the EU, Greece has so far deported 325 migrants, most on small ferries from Lesbos, which lies just 8 kilometers (6 miles) from the coast of Turkey.

But most will have to wait months to have their asylum applications reviewed as they remain at camps created to register masses of migrants heading toward central Europe, but now being used to stop them.

"It's clear conditions at the camps are unacceptable. There are unaccompanied minors locked up behind barbed wire," said Jerome Oberreit, secretary general of the relief agency Doctors Without Borders, or MSF.

"I hope a leader who influences opinion, like the pope, will voice the worry that Europe is actually not going the right way, and that this deal will have repercussions. It's a historical dismantling of the right to asylum," he told the AP.

"You can't outsource people's rights. They have to be upheld inside Europe."

More than a million refugees and migrants traveled to the EU last year, about half landing on the beaches of Lesbos, some of which are still littered with orange life vests. The migration was halted earlier this year after Austria and Balkan countries imposed strict border controls — leaving some 50,000 people transiting through Greece stranded.

On Lesbos Friday, hundreds of police personnel were taking up positions after being sent to Lesbos on a chartered ferry from the mainland for the visit. They include anti-terrorism officers, riot squads, and plain clothed officers who will be deployed at the Moria detention camp where the leaders plan to meet some 250 asylum seekers in a large tent, make a public address, and join a group of detainees for lunch.

Syrian refugee Muhammad Mansour reached Lesbos before the March 20 cutoff date and stays in an open camp run by the United Nations refugee agency. Though unlikely he would see the pope, he welcomed the visit.

A hospital nurse, the 23-year-old from Damascus is hoping to work in Europe through an EU placement scheme.

"Actually, I hope it will make a difference because (Pope Francis) is a respected person," Mansour said. "I think it will be something new for the refugees."