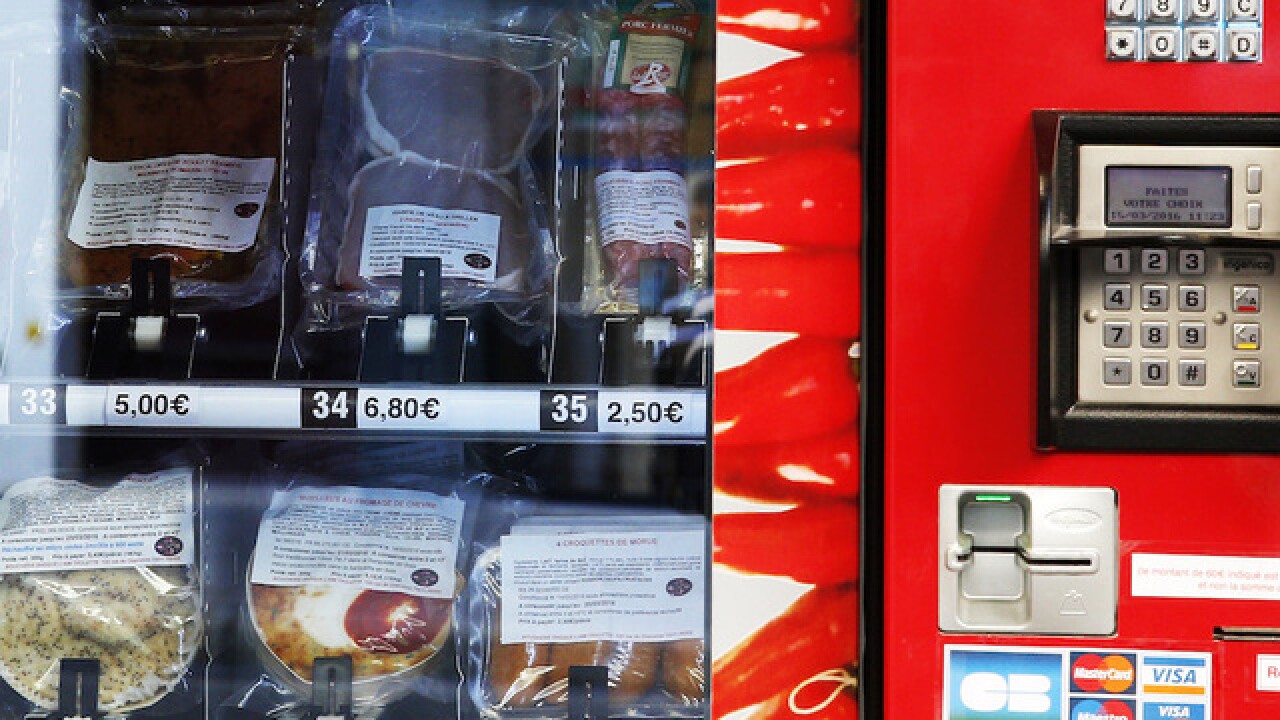 PARIS (AP) — With their beloved baguette already available 24 hours a day, it seems only logical that Parisians can now get the Bayonne ham and Basque pate that goes so well with the bread from the first meat vending machine installed in the French capital.

In a city filled with small shops where long lunches remain a crucial part of the French "art de vivre," the gleaming red machine set up on the lively Rue de Charonne in eastern Paris seems a bit incongruous.

The area has at least two dozen butcher's shops and no shortage of meat, but that didn't deter the owners of one of those shops, Florence and Michel Pouzol of "L'ami Txulette," from investing 40,000 euros ($45,000) to set up their project, selling vacuum-packed meat from the refrigerated machine.

"We're closed two days: Sundays and Mondays," Florence Pouzol told The Associated Press. "So this is to cater for customers over the weekend. ... The idea was also to serve people after the shop's closing hours. We close at 8 p.m. but some people leave work very late and find the shop closed when they walk past it."

L'ami Txulette specializes in products from the Basque Country. From their machine, which takes cash or credit cards, customers can also get a large choice of traditional delicatessen including duck confit and beef carpaccio. There are also faux-filet steaks on display, priced at 34 euros per kilogram. On average, the products are 20 euro cents more expensive than those sold inside the shop.

A majority of shops remain closed on Sundays in France, but the Pouzols are confident that France is changing fast and so are their customers' habits.

"Our customers are young. There are also quite a few bars and restaurants along the boulevard," Florence Pouzol said. "When we see them during the day, they tell us: "Last night, I bought this, or that, and it was really helpful." We also have those who work in the cafes and restaurants and who come off work at 2 a.m. They tell us they were happy to buy an entrecote or something else to eat."

But not all residents, especially the older ones, seem ready to stop running errands at their favorite shop and switch to the meat dispenser.

"I'm so happy that I can actually go to the butcher's shop now that I'm retired and go there in person", said local resident Lydie Aparacio. "I think that it can be useful for people who are busier than a retiree. I don't use it because I have time."

While baguette dispensers have been enjoying a large success across France over the past five years, the meat vending machines business remains in in the embryonic stage in France. The first machine of this type was installed three years ago in the small western town of Garat by a butcher who set it up outside a bar.

According to the bar owner, it adds extra comfort in an area lacking services.

"We don't have a butcher's shop in town, the first one is located three kilometers (two miles) away," Jo Ferreira told the AP in a phone interview. "When you finish work at 7 p.m., it's very convenient to have this machine available. I love their minced burger steaks."

In the central medieval town of Mennetou-sur-Cher, popular with tourists, Pascal Bidron has installed a machine to sell his locally made andouillette, a sausage prepared with pig's intestines.

He bought a second-hand machine and put it next to his shop, which is closed for more than three hours during the daytime.

"I have customers coming from afar to buy my andouillettes and I wanted to serve them even when the shop is closed" Bidron told the AP. "I recently went away for two weeks and managed to sell 250 andouillettes during my vacation thanks to that machine. It's more than I expected."