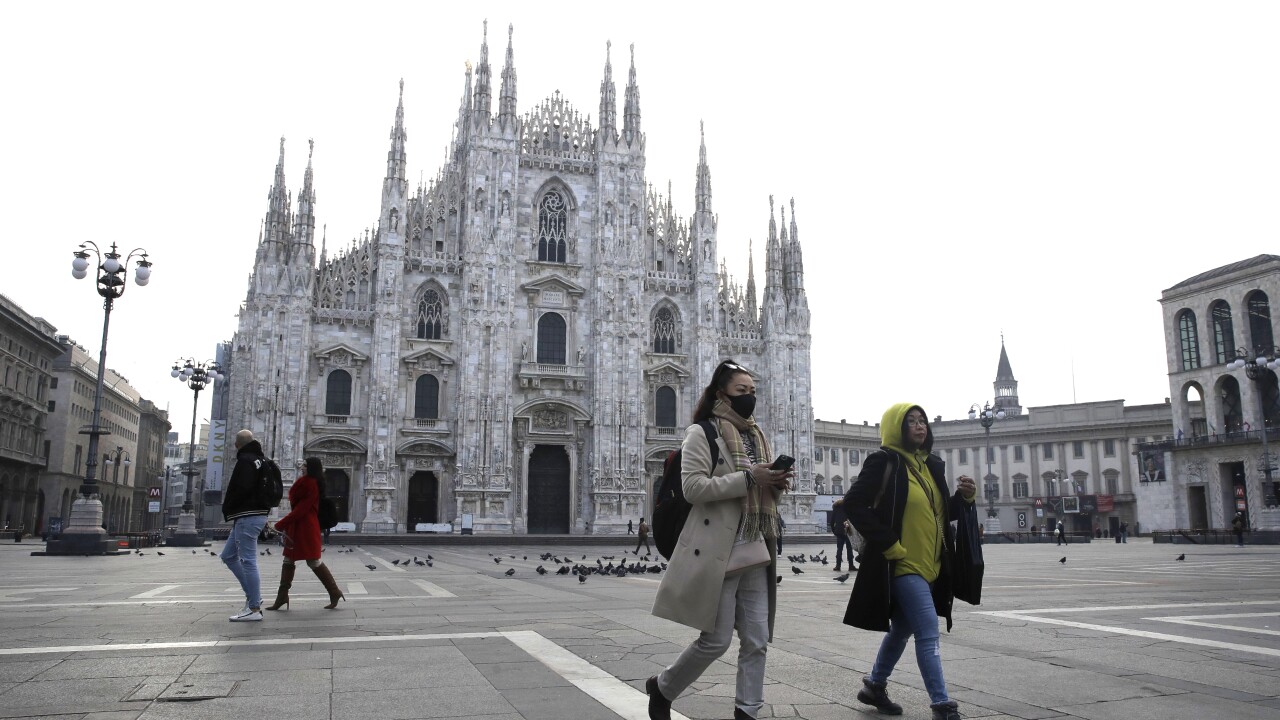 Luca Bruno/AP
A woman wearing a sanitary mask walks past the Duomo gothic cathedral in Milan, Italy, Sunday, Feb. 23, 2020. A dozen Italian towns saw daily life disrupted after the deaths of two people infected with the virus from China and a pair of case clusters without direct links to the outbreak abroad. A rapid spike in infections prompted authorities in the northern Lombardy and Veneto regions to close schools, businesses and restaurants and to cancel sporting events and Masses. (AP Photo/Luca Bruno)

ROME (AP) — Italian authorities have announced they are shutting down Venice's famed carnival events in a bid to stop the spread of the novel corona virus, as numbers of infected persons in the country have soared to at least 133.

Veneto regional Gov. Luca Zaia said the shutdown will begin Sunday evening. Carnival, which draws tens of thousands of visitors to the lagoon city, would have run through Tuesday.

Authorities said three people in Venice have tested positive, all of them in their late 80s and who are hospitalized in critical condition. Nearly all of Italy's cases are clustered in the north, including in the northeast Veneto region which includes Venice.

Italy's number of cases of the new corona virus leaped upward, with dozens of new confirmed cases reported in Lombardy, the northern region which includes the country's financial capital, Milan.

The total number of confirmed COVID-19 cases in Italy had reached 115 on Sunday, state TV said following an announcement by Lombardy Gov. Attilio Fontana that there are 89 cases in his region. Most of those cases have popped up in small towns in the countryside, although Milan has at least one case.

Almost all of Italy's cases are clustered in the north, with roughly a dozen towns on lockdown — meaning that people are not allowed to enter or leave the towns' boundaries.

After Lombardy, the next hardest-hit region is Veneto, in the northeast, with at least 17 cases.

Italians' cherished Sunday routines – from soccer to church-going – were being touched by the spread of the contagion, almost entirely based in the north. Sports events in the affected northern areas, including local kids' sports team practices to three Serie A (top major league) soccer matches, were canceled.

Bishops in several dioceses in northern Italy issued directives that holy water fonts be kept empty, that communion wafers be placed in the hands of the faithful and not directly into their mouths by priests celebrating Mass and that congregants refrain from shaking hands or exchanging kisses during the symbolic Sign of the Peace ritual.

In a coincidence, the Vatican official in charge of the office dealing with propagating the faith hails from one of the hardest-hit towns, Codogno. Archbishop Rino Fisichella, whose siblings live in the town, declined to dramatize the measures. "It's obvious that we need to use all necessary prudence" to avoid spreading the virus among the faithful, he said.

Italy's first cases — that of a married Chinese couple who were on vacation in Rome — surfaced in early February.

To date, two deaths — of elderly persons in the north — have been reported.

Of those hospitalized in Italy, at least 18 people were in intensive care on Sunday, according to officials.