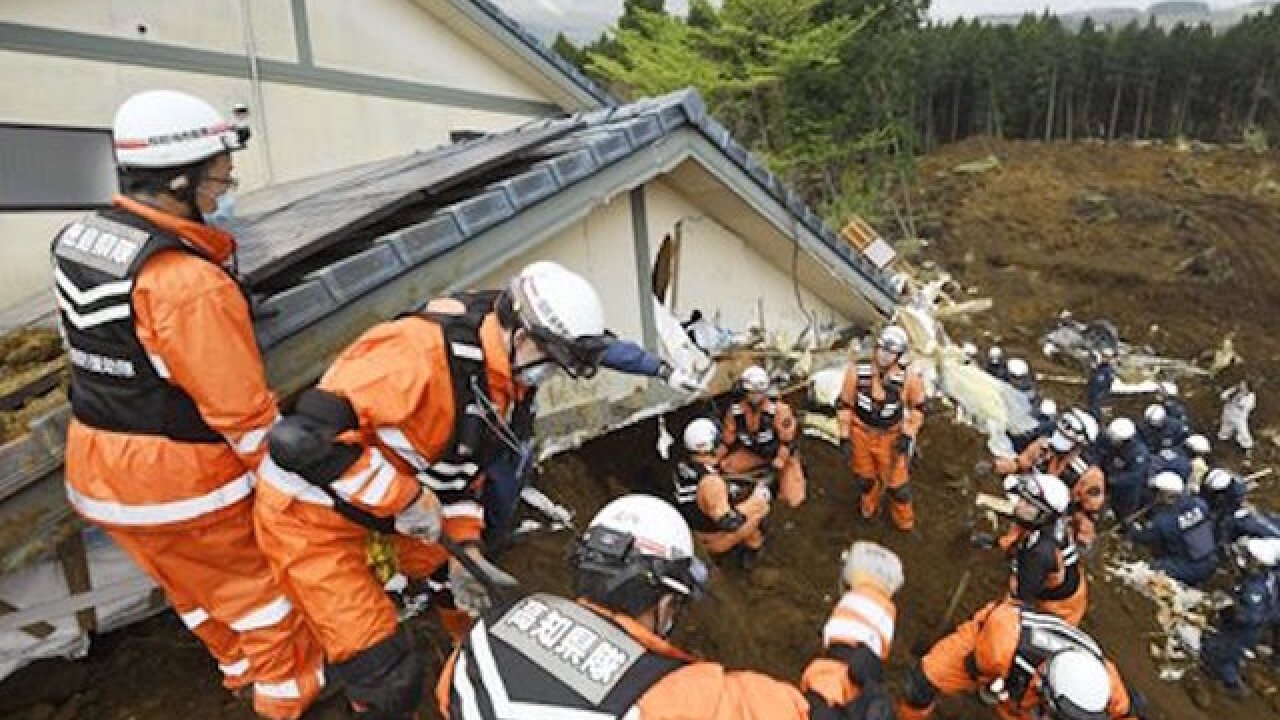 MINAMIASO, Japan (AP) — Japan's southern quake-hit area was rattled by a strong aftershock Tuesday and searchers found a woman's body buried under landslide rubble, raising the death toll from the twin earthquakes to 45.

More than 100,000 evacuees, some sleeping in their cars and others in gymnasiums or community centers, were bracing for another chilly night. Many people are afraid to stay in their homes as aftershocks continued to shake the area on the southern island of Kyushu, including a 5.5-magnitude temblor Tuesday afternoon.

Authorities were advising people staying in cars and shelters to move about to avoid developing deep-vein thrombosis, or blood clots that develop after being immobile for a long time. Japanese media reported that a 51-year-old woman from Kumamoto had died Monday from the condition.

The area around Kumamoto was hit by two quakes within 28 hours of each other late Thursday and early Saturday, triggering landslides that have blocked roads. The Fire and Disaster Management Agency said nearly 1,200 houses had been destroyed.

Nine people died in the first, magnitude 6.4 earthquake, and at least 36 died in the second one, which registered 7.3. About 1,100 have been injured.

The hardest-hit towns are Mashiki, where 20 residents died, and Minamiaso, a remote mountain area where 11 died and the death toll is creeping up as soldiers and emergency workers use backhoes and shovels to search for missing people.

Temperatures around Kumamoto city are forecast to fall to 8 degrees Celsius (46 F) overnight.

The earthquake damage and loss of power and water is reverberating beyond Kyushu as Toyoto Motor Corp. and other manufacturers have suspended production.

Several soldiers carried a woman's body down on a plastic tray covered with an olive-green tarp Tuesday morning as dozens of workers dug through where a mudslide slammed into buildings in Saturday's quake.

Food shortages and cuts to water service are plaguing the relief effort.

American military airlifts are helping to deliver water, bread, ready-to-eat food and other emergency supplies to remote areas. The U.S. has about 50,000 troops stationed in Japan, and the American military played a large role in rescue and relief in 2011 after a massive earthquake and tsunami hit the northeastern coast of the main island of Honshu.

This story corrects the magnitude of the second earthquake to 7.3 instead of 7.1.