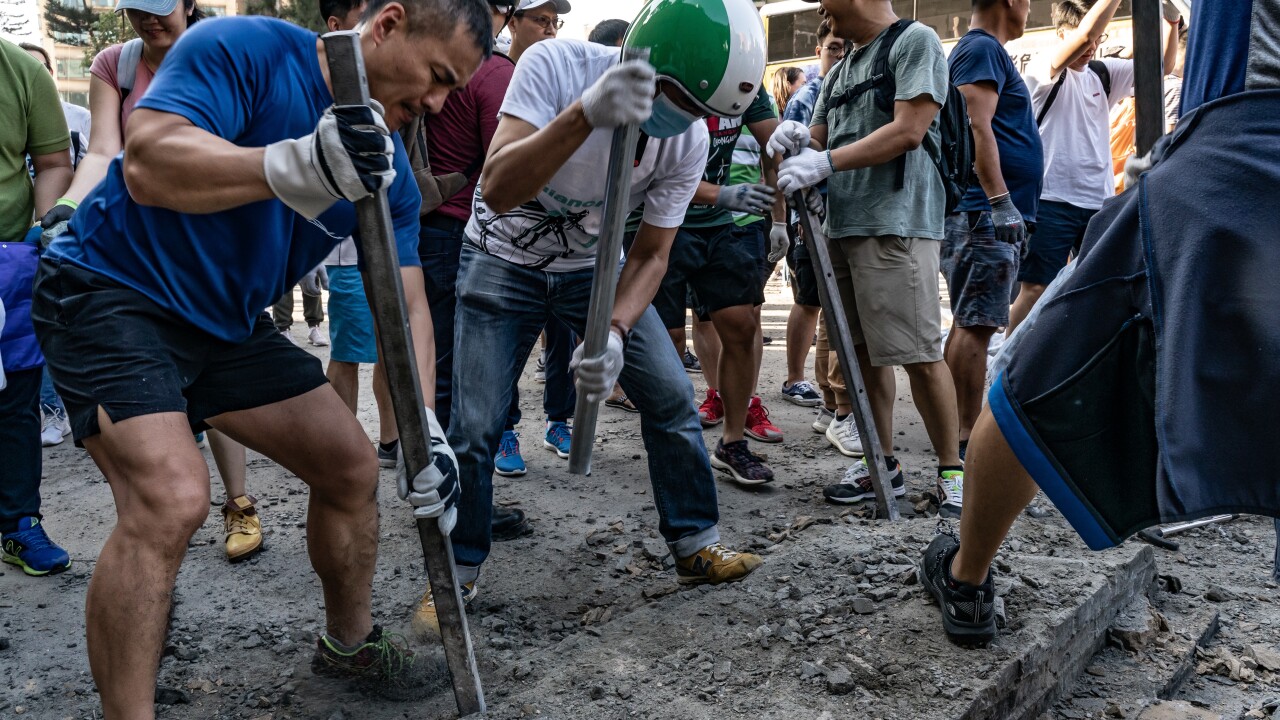 Copyright 2019 by Getty Images
Anthony Kwan/Getty Images
HONG KONG, CHINA - November 16: Residents use metal sticks to break concrete barricades built by protesters on Pok Fu Lam Road at the University of Hong Kong on November 16, 2019 in Hong Kong, China. Anti-government protesters organized a general strike since Monday as demonstrations in Hong Kong stretched into its sixth month with demands for an independent inquiry into police brutality, the retraction of the word "riot" to describe the rallies, and genuine universal suffrage. (Photo by Anthony Kwan/Getty Images)

HONG KONG (AP) — Most anti-government protesters abandoned their occupation of Hong Kong’s universities Saturday, while the small contingents that remained harassed some of those cleaning up and kept a major cross-harbor tunnel closed.

City workers, residents and even some Chinese army troops stationed in the semiautonomous territory came out to clear streets that protesters had strewn with debris to slow down any police advance while they had been on campus.

For a city now accustomed to fierce weekend clashes between police and protesters, Hong Kong had a relatively quiet Saturday. About 1,000 people turned out for an annual Gay Pride event in the center of the city.

Dozens of troops from a nearby barracks helped street cleaners pick up paving stones, rocks and other obstacles that had cluttered the street and prevented traffic from flowing. Hong Kong riot police kept watch from nearby streets.

The soldiers, jogging in formation, carrying brooms and singing in cadence, were a rare sight on the streets of the city. China maintains a garrison of about 10,000 soldiers, but they can’t operationally deploy without a request from the Hong Kong government.

There were scattered incidents of protesters arguing with people clearing roadways, and in one instance, throwing a gasoline bomb near City University of Hong Kong.

Protesters also massed near Hong Kong University in the evening to try to block a main road again, but they were stopped by police firing pepper-spray balls.

Several dozen protesters remained at the Hong Kong Polytechnic University, some keeping watch on the blocked access road to the Cross-Harbour Tunnel, where they torched the toll booths on previous nights.

Traffic disruptions continued to plague parts of Hong Kong, and schools and universities remained closed in the city of 7.5 million people.

Now in their sixth month, the anti-government protests have grown increasingly violent even as they have shrunk in size, often causing chaos in the streets.

The protests were sparked by a government decision to submit legislation that would have allowed the extradition of criminal suspects to the mainland. Activists saw it as an erosion of Hong Kong’s autonomy under the “one country, two systems” formula implemented in 1997, when Britain returned the territory to China.

The bill has been withdrawn, but the protests have expanded into a wider resistance movement against what is perceived as the growing control of Hong Kong by Communist China, along with calls for more autonomy for the territory.

Universities have become the focus of the protests in the past week and the main battleground between pro-democracy activists and the police.

Authorities said that all lanes of Tolo Highway, which the Chinese University protesters had blocked, were reopened around midday.

Police and protesters fought intense running battles at the Chinese University campus Tuesday, which had been transformed into a fortress by hundreds of protesters.

Except for the Polytechnic University in Kowloon, most of the remaining nine major universities in the city were for the most part no longer occupied, except by a handful of protesters. A hardcore group retained their grip on Polytechnic.

Students there have amassed a huge arsenal that includes hundreds of Molotov cocktails, rocks and paving stones. The campus is adjacent to a major road tunnel under the water to Hong Kong island that has been closed for days after protesters set toll booths on fire.

Service remained partially suspended on at least three of Hong Kong’s 12 rail lines because of damage to stations and other facilities, and many of the city’s buses were not running.

The presidents of nine universities issued a joint statement late Friday calling on the government to resolve the political deadlock and restore safety and public order.

“No political viewpoint gives a license to damage property, employ physical threats, or use violence against individuals,” the statement read in part. “It is regrettable that societal disagreement has led to university campuses becoming major political battlefields, and that the government response has so far not been effective.”

Hong Kong media reported Saturday that at least 300 Dutch exchange students were asked by their home universities to return home because of the violence.