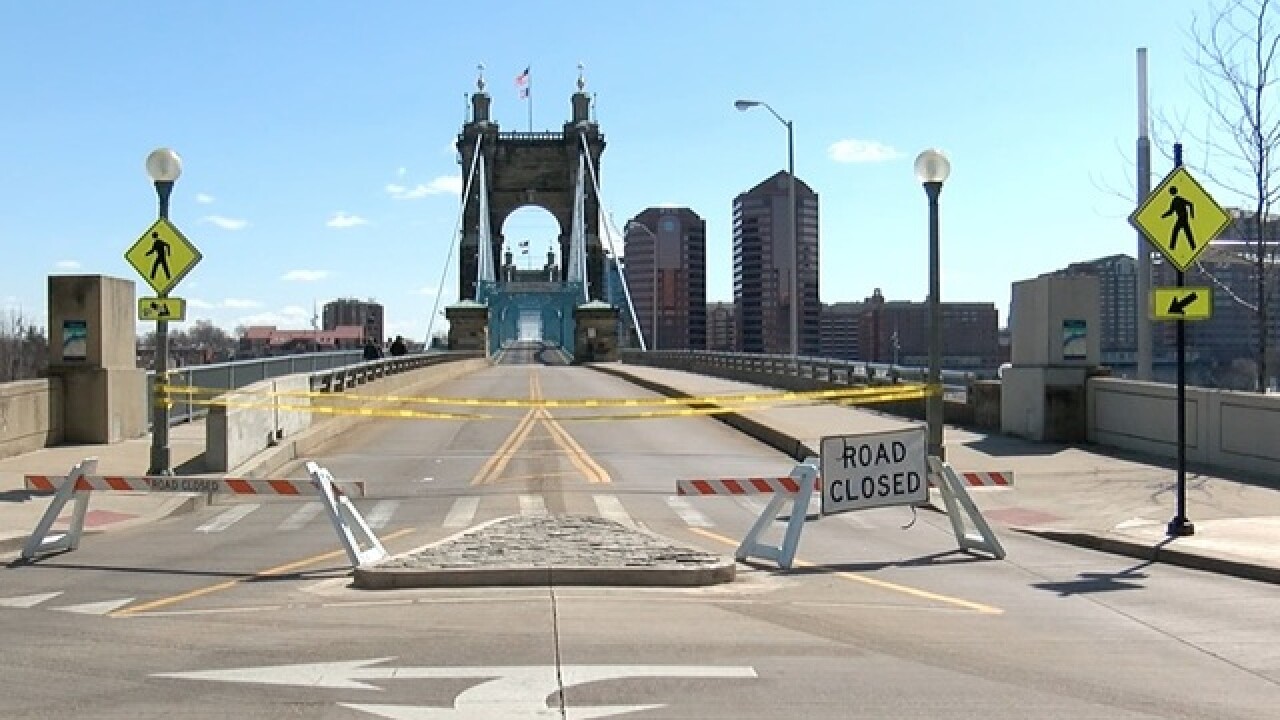 Copyright 2018 Scripps Media, Inc. All rights reserved. This material may not be published, broadcast, rewritten, or redistributed.
Tom McKee | WCPO
<p>CINCINNATI. March 22, 2018. The John A. Roebling Suspension Bridge was closed after a driver crashed, damaging part of the historic structure.</p>

COVINGTON, Ky. -- The John A. Roebling Suspension Bridge could be closed until June after a "bootleg" cab driver damaged the historic structure last week.

Nancy Wood, Kentucky Transportation Cabinet spokeswoman, said the agency is still waiting a final proposal from a consultant, likely to arrive sometime next week. But the early estimates are that it will remain closed until June.

"Let's face it," Covington Mayor Joe Meyer said. "It's a unique design, and any element that needs to be repaired or replaced is going to take special fabrication to accomplish."

RELATED: Here are some alternate routes

In Wednesday's crash, according to Covington police, a "bootleg" cab driver -- one without any official certification to drive passengers for money -- hit a vertical steel structure. He then fled the scene, leaving two passengers, one of whom was a pregnant woman, behind.

The driver was still unaccounted for on Monday night.

The damaged portion of the bridge had been built in 1890, and engineers were working last week to figure out whether that section could be repaired or needs to be replaced with newer, modern steel.

Transportation officials initially allowed pedestrians to continue crossing using the bridge's sidewalks. But Friday, they closed that portion, too, citing an "increase of pedestrians" since the accident.

Meyer added he was frustrated to learn the bridge would need to be closed on Opening Day, when many Reds fans traditionally make a ritual out of crossing the bridge on foot.

"How terrible is that?" he said. "It's really unfortunate."

He added, however, that the area would "need to be patient and understanding" during the necessary repairs.

The iconic bridge, linking Covington and downtown Cincinnati, was the world's longest suspension bridge when it opened in 1866. It is named in honor of the civil engineer who designed it and went on to design the famous Brooklyn Bridge in New York.