'Everyone has a seat at the table'

Sonny Wagner has a full schedule. As an assistant project manager for Skanska, USA, which is building the seven-story Medpace office expansion near Madison Road and Red Bank Expressway, it's necessary to make sure everything is done within budget and on time. Occasionally, there's time for lunch with the kids. 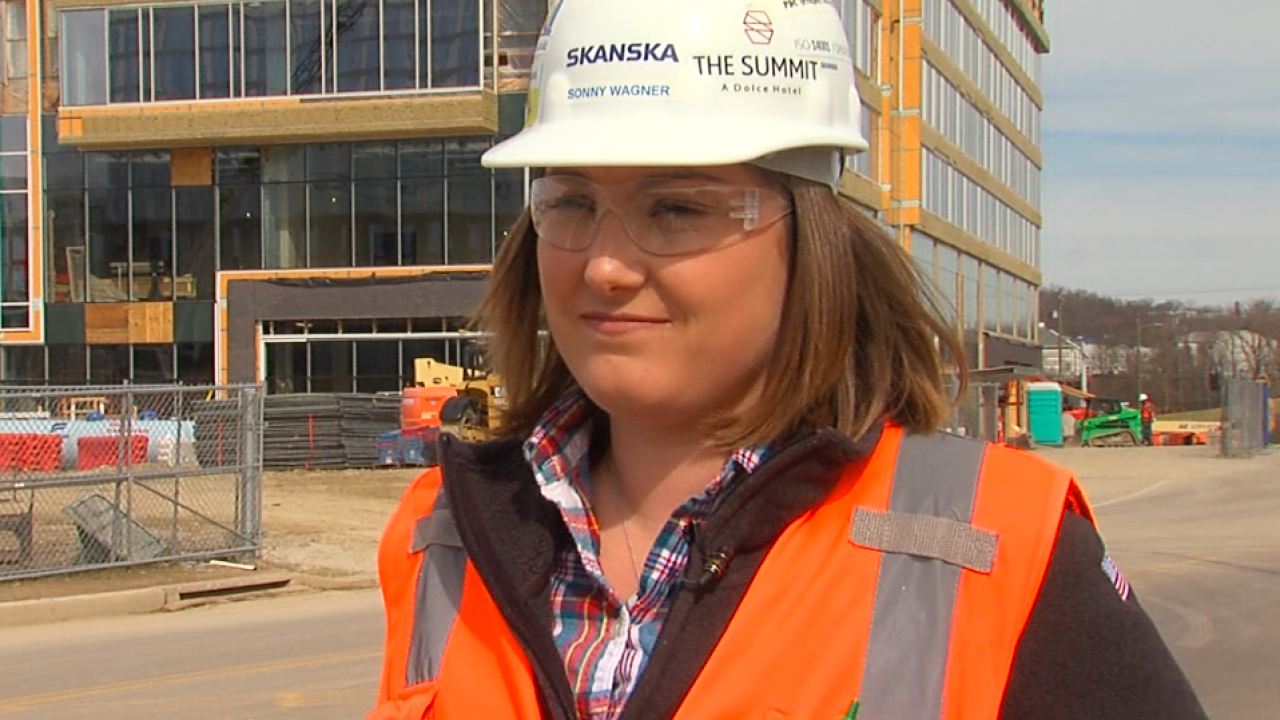 Sonny Wagner has a full schedule.

As an assistant project manager for Skanska, USA, which is building the seven-story Medpace office expansion near Madison Road and Red Bank Expressway, it's necessary to make sure everything is done within budget and on time. Occasionally, there's time for lunch with the kids.

Did we mention Wagner is the mother of three young daughters?

"They believe that I'm building these buildings with my actual two hands, which isn't necessarily the case," she said.

What Wagner is doing is helping to change the look of the male-dominated construction industry. On the Medpace project alone, there are four women on the 15-member project team. That may not seem like a lot, but it represents a higher percentage rate than the national average. According to the National Association of Women in Construction and Bureau of Labor Statistics, women make up roughly 10 percent of the construction workforce. That includes a variety of areas such as sales, management, service and construction and maintenance.

"For employers, it's about being open to diversity in the workplace," said Amanda Prestwood, president of the Cincinnati chapter of NAWIC. "And we're definitely starting to see that happen. From a female perspective, it's about seeing construction as a viable career path."

Wagner agreed, saying that many people think about construction business as a male-dominated field consisting of long hours and a lot of traveling.

"That's just not the case anymore," Wagner said. "I think the importance of diversity and diverse teams (is that) diverse teams perform better. I think when you're intentional about that, it doesn't feel as male-dominated."

The multitude of construction projects underway in Cincinnati right now have created lots of opportunities within the industry, said Prestwood, who works for Lithco, a concrete subcontractor. One of their clients is FC Cincinnati, and the project coordinator on that team is a woman.

"Within NAWIC we have females that are business owners of safety companies," she said. "We have architects. We have engineers all the way into carpenters, so it's really the gamut."

Wagner said the women in construction are supportive, too. Meeting other women in the business helped inspire her to want to do more in the construction business.

"I've been able to be introduced to women in executive roles across the country," Wagner said. "And I've been sent on trips to go shadow them and go learn what their day-to-day is like. So that when I do get to that point in my career, I'll be ready and I'll have those connections."

Also, unlike in other professions, the pay is nearly at par with what men make -- 99.1 percent.

"It is very competitive for both males and females," Prestwood said. "You're getting paid for the work that you're doing."

Wagner never planned on working in construction. She earned a business degree from Indiana University, and a part-time office job at Skanska led to a chance to work in the field after about four years. But she said it was a slow process.

"You have to prove yourself that you know what you're talking about, and you have to become prepared and always be the most prepared," she said, although she believes that is the case in most fields.

Meanwhile, having a large construction project like Medpace on her resume looks pretty good. The project covers 265,000 square feet, a parking garage with 900 spaces and 90,000 square feet of retail space.

"There's a grand stair that comes into the building. It's a seven-story grand staircase," said Matt Thompson, senior superintendent with Skanska, USA. "On the exterior you'll be able to see the light art that has the ability to change what it depicts on a daily basis."

Wagner said that when working on construction projects like Medpace's Madison Square show, she's treated equally in the construction industry. She said she's been received well by her male co-workers.

“Everyone has a seat at the table and everybody’s seat, it’s the same size,” Wagner said.