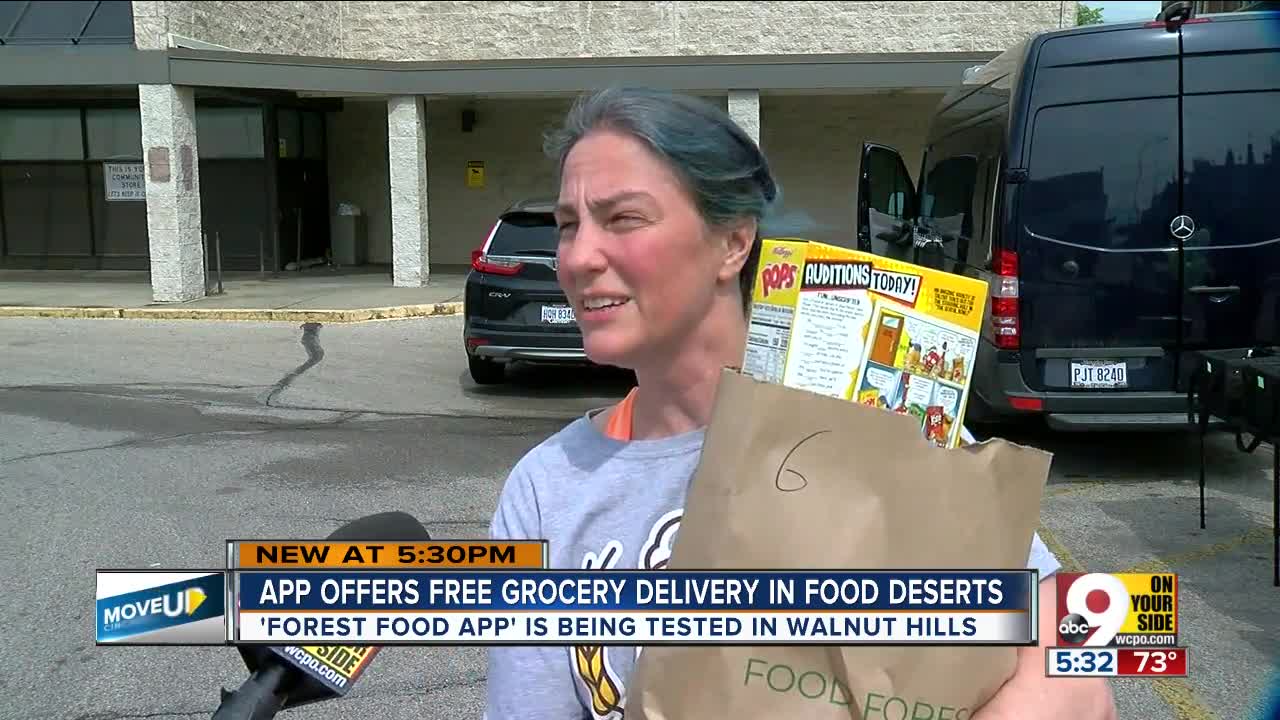 What if there were a way to get healthy, fresh food to Cincinnati area neighborhoods that are currently considered food deserts? David Curtis believes it can happen.

CINCINNATI — What if there were a way to get healthy, fresh food to Cincinnati area neighborhoods that are currently considered food deserts?

David Curtin believes it can happen.

"We're trying to reconfigure how that supply chain looks so that we can actually get affordable groceries into those neighborhoods that retailers consider unreachable," Curtin said.

This is the second week of a pilot program for the app Food Forest, which is geared toward helping people who live in food deserts. Walnut Hills is the first neighborhood to test it as part of a pilot program.

"Forty percent of our residents do not have personal transportation," said Gary Dangel, the food access coordinator for the Walnut Hills Redevelopment Foundation. "Since we don't have a grocery store, they have to leave the area."

The program delivers grocery orders a day after orders are placed within specific zip codes twice a week.

Pricing is often the first question Curtin receives. The app itself is free, and "prices are very competitive with grocery stores," Curtin said. The app even accepts payments through SNAP and EBT.

"We actually have customers swipe their EBT cards when they come and pick up their order," Curtin said. "There is an appetite in the industry to get EBT online because a lot of people believe that could be the solution to food deserts."

Food Forest offers about 10 percent of what most grocery stores carry. The online list includes about 2,000 items ranging from tomatoes to meat.

"I got blueberries in there," said Laura Davis, who was carrying a brown paper bag with Food Forest on the outside. She also bought milk, cereal and apples.

As a former Kroger employee, Curtin is familiar with the grocery store industry and remembers when the company made the decision to close its Walnut Hills store in 2017.

"When I saw the store closure here in Cincinnati, you know, with my experience from Kroger, I thought this might be a good problem for me to try and solve," Curtin said.

The Walnut Hills Community Development Corporation is in the middle of searching for someone to operate a small grocery store in the community. They had seven candidates apply through a request for proposal issued earlier this year. Dangel said they hope to make a decision sometime in June, and have an obligation to open the store by August.

"It's been a little bit over two years now that we've been a food desert," Dangel said. "The residents really would like to see something come back to the neighborhood."

He said he doesn't believe a grocery store option would conflict with the Food Forest app — instead, they'll compliment each other.

"If somebody can't make it to the grocery store, (Curtin is) mobile," Dangel said.

Davis said the app solves a major issue for her.

"What I wanted was the 20,000-square-foot store across the street from me. So, having somebody else walk around it for me, is great," Davis said.

Curtin said the app is designed to be simple for users. After logging in and picking their delivery date, time and location, customers can start shopping online.

"We give you the ability to basically just scroll through aisles and aisles indefinitely, as if you're running through a grocery store at 30-40 miles an hour," Curtin said.

He said what makes the business model work is eliminated some inefficiencies in the grocery store supply chain model. One plan is to use local farmers for produce. Curtin said accessing fresh produce from local farmers helps them as well.

"I think they can become more competitive and they can find their items inside a customer's grocery basket, " said Curtin.

Meanwhile, other Cincinnati neighborhood leaders are watching how well the pilot program works in Walnut Hills. Success in Walnut Hills could mean expansion opportunities in other areas of town without access to fresh food.

Curtin also said he is not interested in using the Food Forest app in more affluent areas of town. He sees offering the service to people in food deserts as his mission.

"I want the name Food Forest to always resonate with food desert," Curtin said. "I want people to know that we're staying close to that mission and that's what this company is founded on."