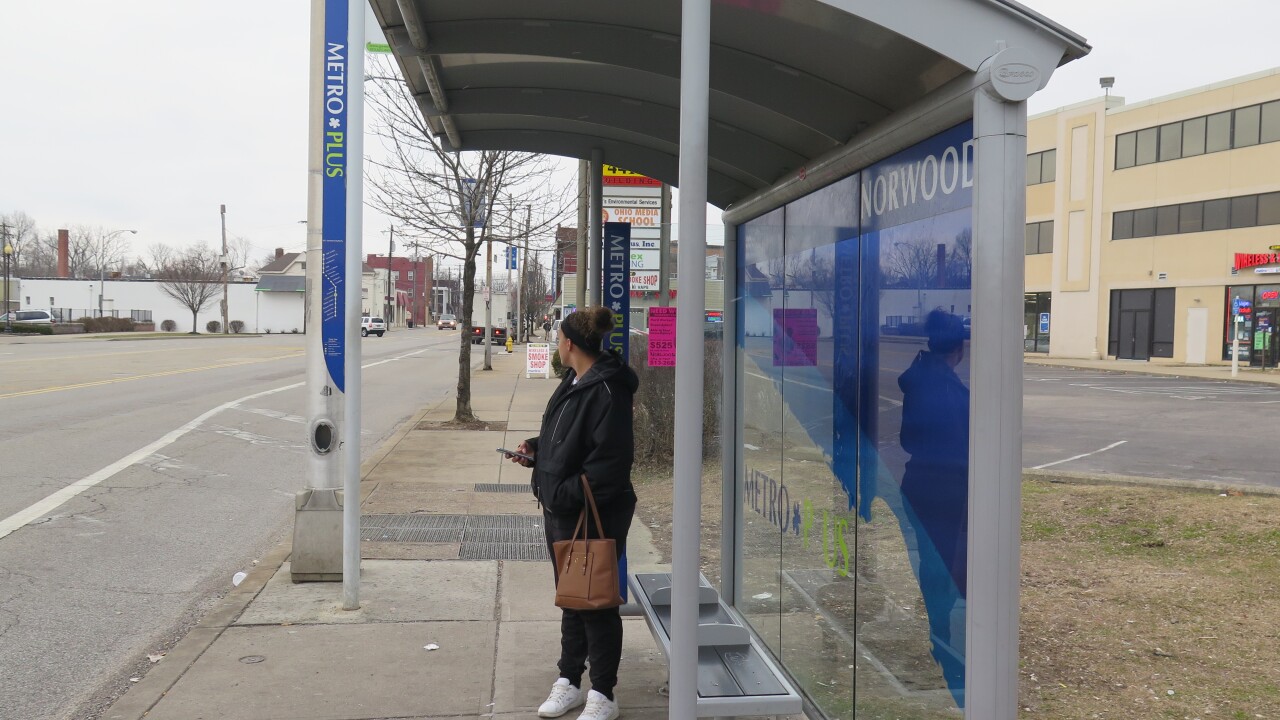 Lucy May | WCPO
Heather Taylor waits at a bus stop near her apartment in Norwood. 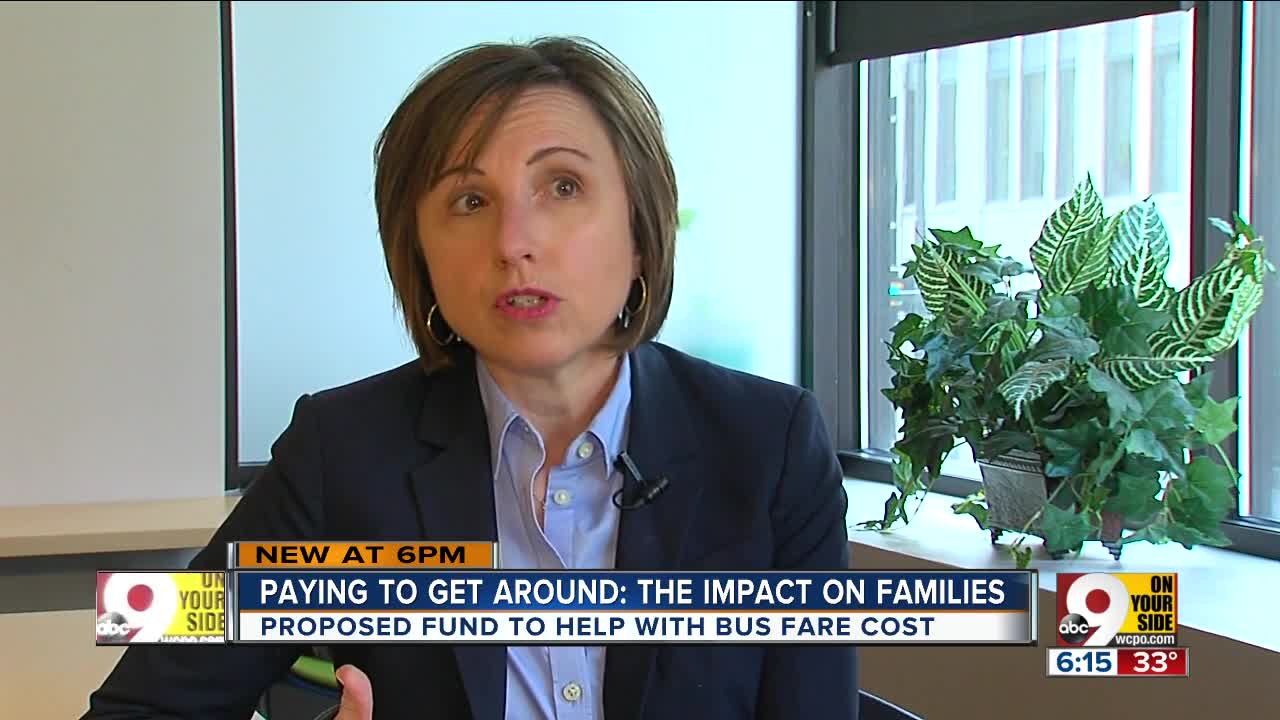 NORWOOD, Ohio — Heather Taylor walks to her job at a Norwood manufacturing plant most days, but takes the bus when the weather is especially cold or wet.

That’s when going to work gets expensive for Taylor, a 32-year-old mother of three.

“Sometimes I feel like I’m just working to pay for the bus,” said Taylor, who earns $13 an hour and starts her shift by 7 a.m. each weekday. “So it gets stressful after a while.”

Taylor is one of thousands of people in Greater Cincinnati that rely on the bus every day. A proposed Transportation Empowerment Fund aims to reduce the stress that she and so many other riders feel when it comes to paying the fares.

The Human Services Chamber of Hamilton County is urging the creation of the fund to provide free or discounted bus passes or other ride options to eligible, low-income residents. Participating nonprofit organizations and government agencies would distribute the passes so riders could get to jobs, classes or other important commitments, said Gina Marsh, executive director of the Human Services Chamber.

“There are a lot of employers right now who are trying to fill positions all over our region,” Marsh said. “The problem is, they’re having problems finding workers because the workers can’t get to them.”

A Transportation Empowerment Fund would give nonprofit organizations the flexibility to give clients daily, weekly or monthly passes, depending on their needs, she said.

The proposal has some key supporters. The board of trustees of the Southwest Ohio Regional Transit Authority, which operates Metro, approved a “Reinventing Metro Plan” in January that includes language about how “riders in need” could benefit from a transportation empowerment fund or a similar program.

The Cincinnati USA Regional Chamber likes the idea because it would help make more jobs accessible to people who need them, said Pete Metz, the regional chamber’s transportation policy and coalition manager.

“As we’re trying to lift folks out of poverty and connect them to jobs, having affordable transportation is often one of the barriers to doing that,” Metz said.

Leaders of the Child Poverty Collaborative also like the proposal for that very reason, said Mary Asbury, executive director of the Legal Aid Society of Greater Cincinnati.

The Child Poverty Collaborative’s Project LIFT could help identify sources of money for the fund to help meet the needs of parents of young children, Asbury said.

“We’re trying to figure out who else may need assistance for public transportation,” she said. “We are looking at helping families get into employment, some of whom are just young and starting out in the workforce and some of whom aren’t yet working. But we know they will be relying on the bus and will be coming at this at low income points.”

Hamilton County Job & Family Services has federal funding that some families could use for transportation costs, Asbury said.

If the SORTA board moves forward with a sales tax levy this year, funding for a Transportation Empowerment Fund could be part of the deal, Marsh said.

That would be especially important if SORTA also decides to raise fares to increase revenue for the public transit system. A 2018 survey conducted by the Human Services Chamber found that low-income Metro riders could not afford even a modest fare increase.

More than three quarters of the 700 nonprofit agency employees and clients that responded to the survey had household incomes below $25,000 per year.

“The bus is really their lifeline to employment and to self-sufficiency,” Marsh said.

If a public transit levy could generate $300,000 per year for a Transportation Empowerment Fund, it would be a good start, Marsh said.

The Human Services Chamber is modeling its fund proposal after a similar program in Austin, Texas. The Austin program started in 2011 with an annual allocation of $250,000, and it has been so successful that the budget has increased to $500,000 per year, Marsh said.

The local fund would replace federal funding that used to provide rides to low-income residents through the Everybody Rides Metro program, Marsh said. The federal money dried up years ago. Local nonprofits have used their own funding to continue providing bus fare to clients that need it, she said.

Cincinnati Works, an employment training nonprofit, is one of them.

Transportation is one of the biggest barriers that Cincinnati Works clients face, said Leslie Kish, director of strategic partnerships.

Over the past two years, the organization has spent about $40,000 on bus transportation for roughly 650 clients, which Cincinnati Works calls members, Kish said.

“One of the things that we don’t always think about is that getting a job oftentimes is problem-creating for our members,” she said. “So now not only do you have to get to work, but you might have to take children to child care. You might have additional trips that work requires, like going to the Laundromat so you have clothing. And oftentimes you need to take more than one bus to get to where you need to go.”

When she has to take a bus from her Norwood apartment to go to stores that are in different Metro “zones” and require a transfer, she can spend upwards of $15 per day, Taylor said.

Cincinnati Works provided her with bus passes when she first started her job, Taylor said, and that was a big help.

“It helped me save on spending money that I had so I could, you know, get groceries or get the kids hair cut or get toothpaste and everything we need for the house,” she said.

Taylor’s children live out of town. But her wife has two children, and they also have a granddaughter.

“Money gets tight when you’re trying to figure out, OK, I need to get here and here and trying to get a car, and the bus is my only transportation for now,” she said. “It tends to get very expensive.”