Small businesses helped turn Covington into a boomtown. Can they afford to stay? 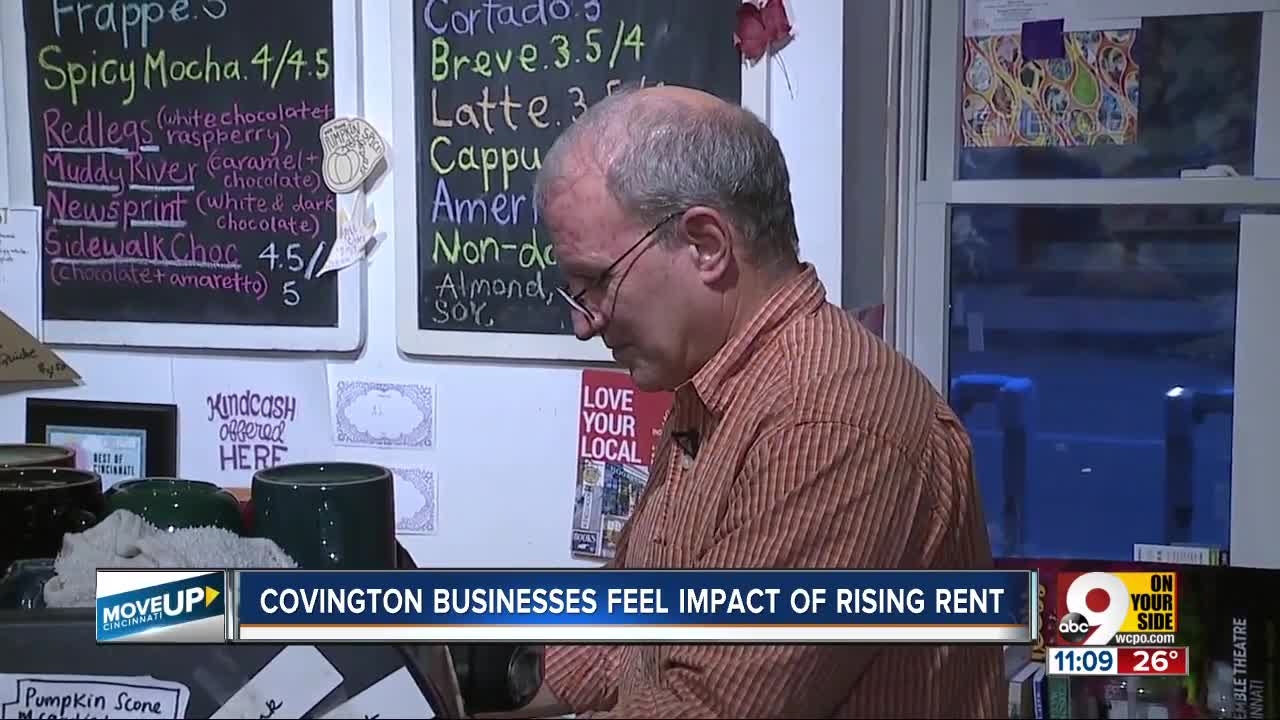 Roebling Point Books and Coffee might have been a victim of its own success, owner Richard Hunt said Thursday night. After a decade of tenancy in Covington, the bookstore-cafe can no longer afford its spot at the intersection of Greenup and East Third streets.

COVINGTON, Ky. — Roebling Point Books and Coffee might have been a victim of its own success, owner Richard Hunt said Wednesday night. After a decade of tenancy in Covington, the bookstore-cafe can no longer afford its spot at the intersection of Greenup and East Third streets.

“We feel like after 10 years, this is where our heart is,” Hunt said.

But Covington is growing, and the cost of living, renting or owning a business there is growing, too. Hunt learned months ago that it had risen beyond what his business could handle.

“The term that seems to be used a lot is what market rate is,” he said. “We have great rent. The market rate is going to take it up to an area that’s beyond our reach.”

The news stung — not just because it would mean Roebling Point leaving its longtime home, but because Hunt believes his shop is part of the business culture that helped reverse Covington’s back-on-its-heels reputation.

When it became hip, when people from outside the community began to recognize the charm of locally owned shops and a distinctive downtown, new residents and businesses arrived.

“We feel like we helped,” Hunt said. “You want to be one of the people attracting people down here. … But the idea, ‘Did we help turn this to the point where we can’t afford to stay?’”

It’s troubling to him.

Realtor Walt Gibler said it’s a natural part of the growth process for communities experiencing a positive reversal of fortune. The average price of property in Covington has grown by 9% in the last year, he added.

“Margins are tougher and tougher with competition,” Gibler said. “Bigger businesses coming in. Rents based on the supply and demand are happening. It’s going to knock some of these businesses out.”

Gibler called it the Walmart Effect, referring to the phenomenon of Walmart grocery stores driving their locally owned counterparts out of business. A more appropriate name for the 20-teens might be the Starbucks Effect — or the Amazon Effect, depending.

Tarris Horton, who owns Cutman Barbershop on Pike Street, acknowledged the changes in the city since he first opened five years ago.

“I knew we made it when we saw the wagon trucks, the pedal trucks,” he said. “They were going to different bars and restaurants. Five years ago in Covington, that was unheard of. Ten years ago, you wouldn’t want to be on this block.”

Now, he describes it as a destination spot. Horton said he believes a high standard of service and customer word-of-mouth will keep his business strong, but he acknowledged small businesses have to make strategic sacrifices when the area around them booms.

“They should have a set grandfathered in rent where it’s not going on up and up,” Horton said. “That takes away from the integrity of the whole what we’re trying to do. Covington is nothing without the people that started it.”

Hunt said he’s willing to make the sacrifice his business needs to survive. He and the rest of the cafe’s team hope to find a new location nearby — something cozy, like their original space — and start again.

“I’m trying to take the high road,” he said. “Realize that everybody does want the best for things at the end. You have to step back and see how that’ll fit together. It’s a quirky building. It was our home. We kind of liked it. It’ll be interesting to see what’s next.”