'My animals are my immediate family' 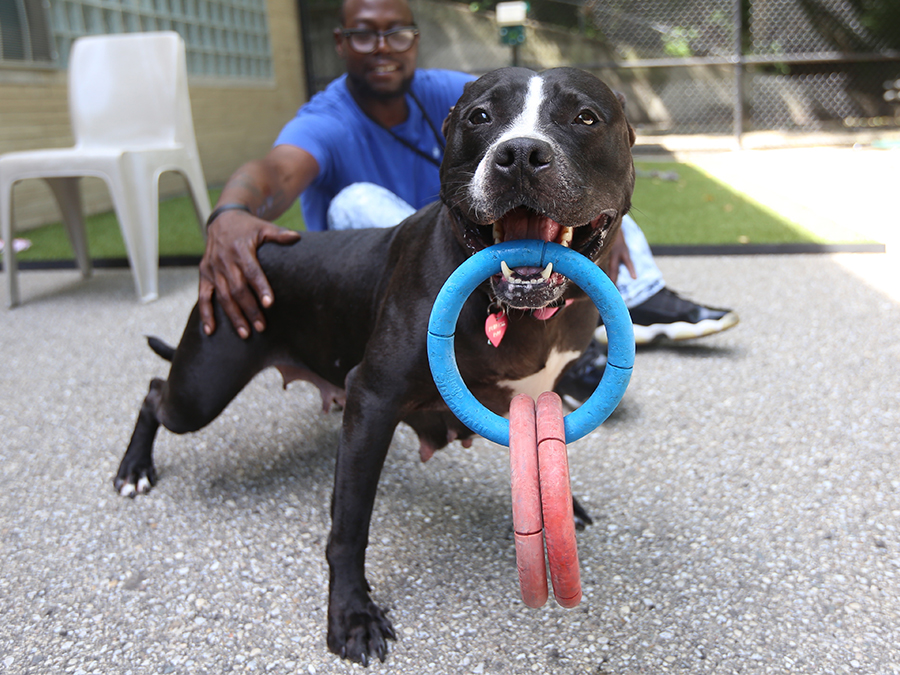 The Interfaith Hospitality Network leads the SAFE Coalition which works to prevent eviction for people and their pets, keeping both healthy and housed. 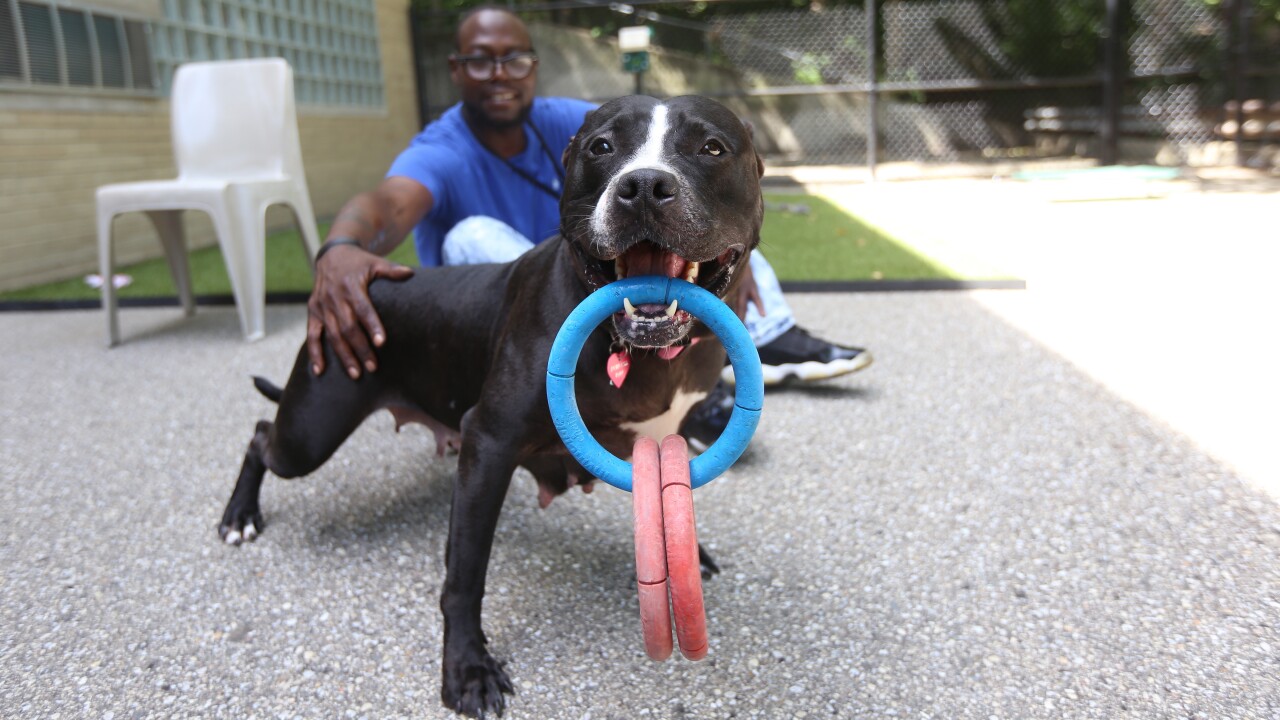 CINCINNATI — When Ronald Ray got evicted, he wasn’t only concerned about finding a place where he and his son, Ian, could stay.

He also was worried about Princess, the dog that 9-year-old Ian thinks of as his “sister.”

“She didn’t really have nowhere else to go,” Ray said of the sweet, friendly dog. “Things were just getting stressful.”

Fortunately, Ray found the Interfaith Hospitality Network of Greater Cincinnati. In addition to giving Ray and his son a safe place to stay while they get back on their feet, the shelter had a kennel available for Princess.

Interfaith Hospitality Network first started providing temporary shelter for pets in 2014 so families experiencing homelessness wouldn’t have to give up their animals. Executive director Stacey Burge said the agency soon found the need was far greater than their small facility could handle.

Last year, pet program coordinator Garrett Parsons reached out to some other local nonprofits to explore the idea of doing more. The result was the creation of the SAFE Coalition.

SAFE stands for “saving animals from eviction.” Its goal is to work with pet owners in unstable housing situations before they become homeless.

“The highest reason that people surrender their animals is because of housing issues,” Parsons said. “How can we intervene so we are preventing our families from having to undergo this crisis in the first place?”

In April, the SAFE Coalition held its first community-based vaccine clinic, inviting Lower Price Hill residents to bring their pets for free vaccines, pet supplies and referrals for other resources such as flea treatments and clinics to get pets spayed or neutered.

The coalition has also provided some families with free behavior training for their dogs, Parsons said. An untrained pet can, in itself, contribute to evictions.

“The pets need to stay with their people even when those people are experiencing tough times,” Burge said. “Affordable housing is a crisis in Cincinnati so affordable, pet-friendly housing is an even bigger crisis.”

Ohio Alleycat Resource board member Liz Johnson said the coalition’s work aims to reduce the number of pets that end up in animal shelters.

“We do all kinds of things to help when the animals are at the SPCA. We take over 1,000 stray cats every year from them and spay and neuter them,” Johnson said. “What we’d like to do is kind of stop the flow into the SPCA. That’s where this comes in.”

Interfaith Hospitality Network has been questioned in the past about whether helping pets is the best use of the organization’s resources. Burge stressed that separate sources of funding are used for the agency’s pet program.

However, it's not possible to entirely separate the issues of pet ownership and mental health for people experiencing homelessness. For many people with pets, losing their animals would only add to the trauma of becoming homeless or facing housing instability, she said.

“If someone has a pet and feels a connection to them and gets something out of that connection, just because they’re lower-income doesn’t mean they don’t deserve to maintain that connection,” Burge said. “It’s about respecting who they are and their choices for their families. And that, for some of them, includes pets.”

Mindy Robey said as far as she’s concerned, her five pets are her family.

“My parents are dead. My brother lives too far away, and I’m the only one here,” she said. “So my animals are my immediate family.”

Robey had a house in Roselawn that she lost to foreclosure in early 2018. She stayed with a friend in Middletown for a while but had to move out in May because her friend was selling the house.

She had no idea what she would do with her pets until she found Interfaith Hospitality Network, where Parsons told her they had room for all five.

“They got them updated on their shots, whatever they needed, and they became part of the Interfaith family for right now,” she said. “They’re very well-cared-for and loved here.”

Robey sometimes stays with a co-worker and sometimes sleeps in her car, she said. She works at Dillard’s at Liberty Center and visits her animals as often as she can while she continues to look for a new place to live.

“I have had members of my family say, ‘Mindy, you need to get rid of your pets.’ I understand their concern. Their basic concern is that you need to take care of yourself,” she said. “But part of taking care of myself, in my opinion, is what these animals bring to me in my mental health, my emotional health and my spiritual health, and how they help me through that.”

Better for pets and people

Johnson said she hears similar concerns from the other perspective: People who can’t afford medical care for their pets shouldn’t have animals.

Ray’s problems that resulted in eviction didn’t directly relate to Princess, he said, but he thinks that maybe the program could have helped him stay at his place if he had known about it sooner.

“If I could have reached out there and got some help along the way and met these guys, it probably would have been a different turnaround,” he said.

Interfaith Hospitality Network helped Princess get updated on her shots. They also got her spayed and micro-chipped. Ray estimates all of that would have cost him hundreds of dollars on his own.

Ray now has a job working in housekeeping at Cincinnati Children’s Hospital Medical Center, a position he thinks will give him more financial stability.

Ian said he’s glad Princess is at Interfaith Hospitality Network’s offices, where he and his dad can visit her every day.

And while staff and volunteers look after Princess, Interfaith Hospitality Network is helping Ray find a new, pet-friendly place where the whole family can live.

He and other members of the SAFE Coalition have been trying to educate property owners about the benefits of having pet-friendly policies, he said.

Parsons cited research that has concluded pet owners are more likely to stay in a rental unit than tenants who don’t own pets. Pets also do far less damage than a lot of landlords assume, he said.

“Pet owners and pets in apartments can work,” he said.

The more the SAFE Coalition can convince property owners of that, Burge said, the better for everyone.

“We’re looking at keeping people and pets together and having enough resources for them to move forward and keeping them out of homelessness or housing insecurity,” she said. “To me, it seems imperative if we’re going to do right by the families we serve.”

For more information about the SAFE Coalition or to refer a person or pet, email Garrett Parsons at Garrett@ihncincinnati.org.