Local construction just seems like it's never ending. Turns out, there's a reason for that ... 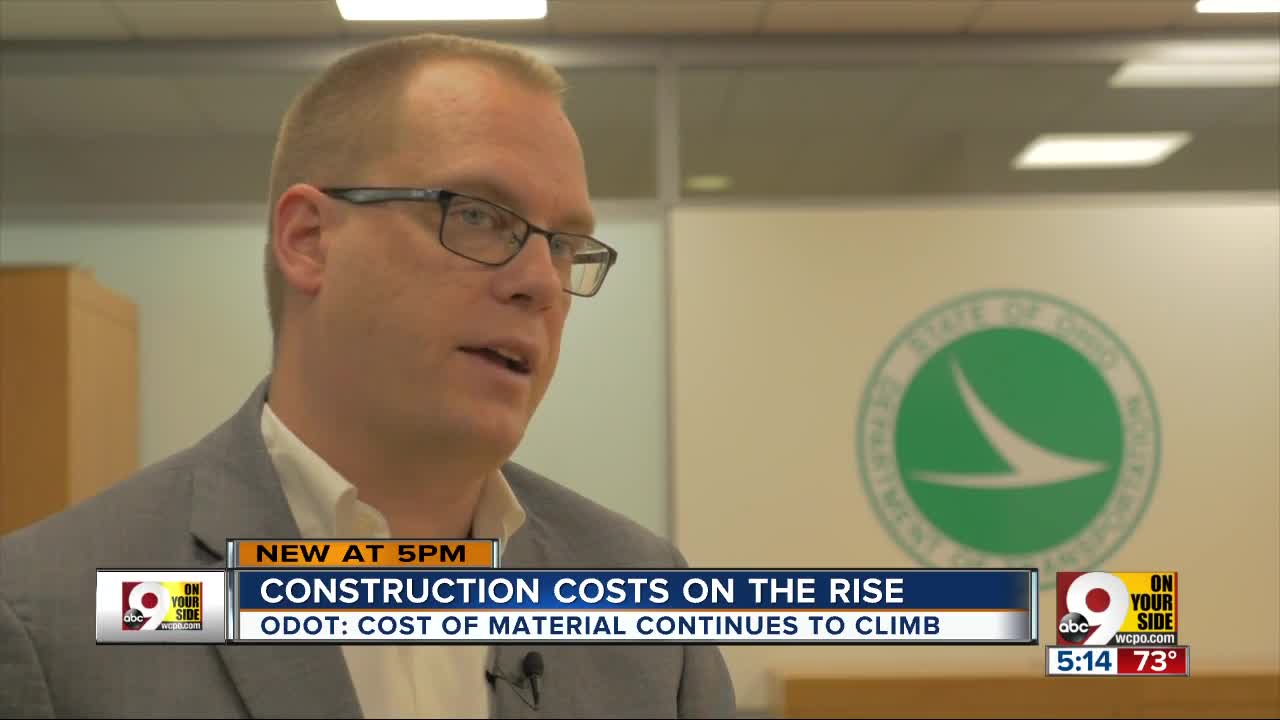 Imagine if your rent went from $1,300 to $2,000 in a matter of six months. That's similar to the 65 percent cost increase Butler County and West Chester Township are seeing for the construction of the diverging diamond interchange being built right now at I-75 and Union Centre Boulevard.

That's similar to the 65 percent cost increase Butler County and West Chester Township are seeing for the construction of the diverging diamond interchange being built right now at I-75 and Union Centre Boulevard.

"What we're seeing lately is that the pricing in the construction phase of this is going up pretty quickly," Butler County Engineer Gregory Wilkens said.

Butler County is not alone. According to the Ohio Department of Transportation, construction materials and labor are climbing steadily statewide. It was the main argument for getting the Ohio state legislature to pass the gas tax increase that went into effect July 1.

"We had about $156 million in projects that were maintenance projects that we had to defer because we were trying to balance the budget before the transportation budget passed," said Matt Bruning, press secretary for ODOT.

In Butler County, Wilkens said they have also postponed projects. Plans to do work on Tylersville Road from I-75 to Cox Road are on hold.

"We projected it to be about a $2 million job," Wilkens said. "It came closer to $3 million and we did not award that job."

In the 14 years since the previous gas tax increase took effect, prices for materials were increasing beyond the 3.9 percent budget increase, according to ODOT.

"When you look at things like aggregate base, the cost is up 84 percent," Bruning said. "Asphalt is up 50 percent. Rebar, which we use in bridges and concrete, that's up 39 percent. And, structural concrete is up 23 percent."

However, the gas tax increase is expected to bring a number of projects out of the moth balls.

Projects like bridge painting, resurfacing and general maintenance will now be completed, Bruning said. The state is also increasing the amount of funds generated from the new gas tax that will be sent to local jurisdictions. The split will be 55 percent for ODOT and 45 percent for local projects. Bruning said that will have an impact on approach work associated with the Brent Spence Bridge.

"Anything we're doing on I-75, and we're doing a lot right now, that is all going to be funded obviously with the motor fuel tax," Bruning said.

By the same token, Wilkens believes more work for contractors drives up the cost.

"Demand is high," he said. "We've got a lot of work out there and supply is low with the contractors already booked up."

Wilkens is concerned that the escalated prices are there to stay.

"What happens is these prices escalate up and they plateau out, but they spike off of this plateau," he said. "This plateau doesn't lower back to the previous prices."

Wilkens said it sets up a cycle where high prices reduce the number of projects the county can afford to schedule. However, if maintenance jobs are postponed, there is a risk of putting projects off for too long.

Wilkens said anticipated budgets will not be enough to cover the work that needs to be done.

"It's very concerning," he said.